APC Governors Hold Private Meeting With Goodluck Jonathan Ahead of 2023 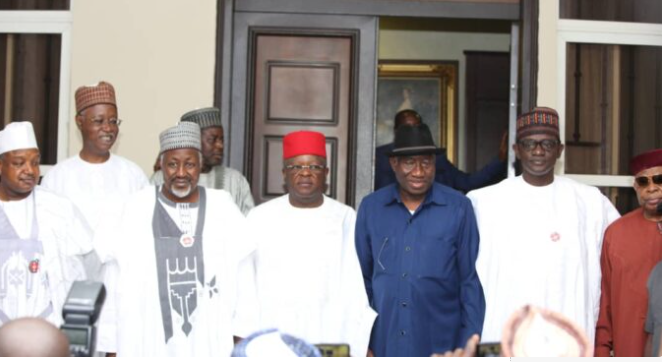 Governors of the All Progressives Congress (APC) held a private meeting with ex-President Goodluck Jonathan in Abuja on Friday evening.

No single member of the Peoples Democratic Party (PDP) was present.

Mai Mala Buni, governor of Yobe state and acting national chairman of the APC, led the governors to Jonathan’s residence in Abuja.

David Umahi, governor of Ebonyi who recently defected to the APC from the PDP; Atiku Bagudu, governor of Kebbi and chairman of the Progressives Governors’ Forum; and Abubakar Badaru, governor of Jigawa, were at the meeting, TheCable was informed.

Also in the team was Kashim Ibrahim-Imam, former presidential liaison officer to the national assembly.

It is unclear what the focus of their discussion was but an insider told TheCable “2023 permutations are taking shape”.

Jonathan was elected president in 2011 and lost to Buhari in 2015, but he is still qualified to run having only spent one term of four years in office.

Coincidentally, Jonathan hosted the duo of Badaru and Bagudu at his Otuoke residence in Bayelsa a year ago.

The governors had visited Jonathan to thank him for his support in the victory of David Lyon, the APC candidate in the 2019 governorship election in Bayelsa.

Lyon was eventually sacked by the supreme court while Douye Diri of the PDP was declared winner of the election.

On Friday, APC leaders, including Ken Nnamani, a former senate president, visited Jonathan in commemoration of his 63rd birthday.

They held a private meeting with the ex-president during the visit which held after the Northern Governors’ Forum congratulated Jonathan on his birthday.

The Northern Governors Forum had sent warm felicitations to Jonathan on his birthday.

In a statement, Simon Lalong, chairman of the forum and governor of Plateau, said the former president has continued to serve the country with zeal and commitment.

He described Jonathan as a true democrat whose “passion for the growth of democracy is reflected not only in his records while in office but also of his current engagements where he has travelled round the world to monitor elections and also engage with stakeholders”.

Lalong also saluted the former president’s patriotism and dedication to the unity, peace and development of Nigeria as well as offering counsel on various issues.

He asked him to remain focused on his life of service that has brought honour and goodwill to Nigeria.

President Muhammadu Buhari had earlier felicitated with Jonathan, saying he has brought honour to Nigeria.

Government should compel banks to give students loans at 1% – Ned Nwoko.