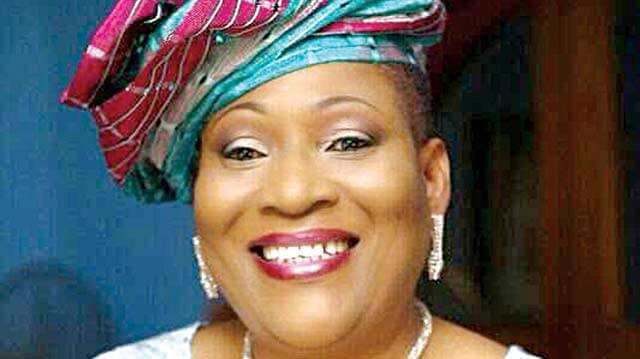 •Details Of Her Classy Party

On Sunday, 28th January 2018, the Yeyesewa of Lagos and APC Women Leader, South West, Chief (Mrs) Kemi Nelson, at her Annual Thanksgiving Service played host to and entertained top politicians and members of the ruling party, APC, in Lagos at a beautiful evening of praise and fun. City People’s Society Editor, TAYO FAJORIN OYEDIJI was there.

THE SERVICE WAS HELD AT YOUTH SPORTS CENTRE, IKEJA

Many top politicians and members of the party, APC, with family members and friends all trooped to Oluwaleimu Sport Centre in Ikeja for the thanksgiving service. There was a red carpet session where everyone took time out for photographs. Guests took their seats under the massive ark marquee mounted inside the Sport Centre and it was beautifully decorated in lovely colours combination.

WHAT’S THE SECRET OF KEMI NELSON’S, BEAUTY?
At over 60, APC national women leader, South West, and Yeyesewa of Lagos, Chief (Mrs) Kemi Nelson, is a glowing beauty. At the thanksgiving service, she looked far younger than 60 and the question on every one’s lips was: What is her secret? She has maintained her beautiful skin over time and also has a lovely figure to go with it. Besides, Mrs. Kemi has scored high in the fashion sector.

She is not slowing down within the social milieu and her signature outfits, mostly her headgear, are one of her staying power. She dazzled in an expensive, but simple all-lace orange boubou embellished with a black all-stoned embroidery and black headgear. Apart from her beauty, many women respect her especially in the party. She is a lover of the masses, she serves as a mentor to many and her hands are always spread to embrace people, no wonder anytime she steps into a party or any gathering, there is always a loud roar from people, hailing her by shouting “women leader”

CHIEF LEKKI BRITISH SCHOOL’S BOSS,
BIODUN LAJA,
DECIDED TO PARTY
If you don’t know her, let’s quickly tell you that Mrs. Biodun Laja, the CEO of one of the Prestigious High Schools, Lekki British School, in Lagos is a sister to Chief (Mrs) Kemi Nelson. They grew up to be close and that is how you will know they are always together. The woman, who is a Career/Corporate woman has alot going for her and she is not a regular party person except for important official outings, but she has to be at this one because of her sister. She also sat at the head table with her friends.

WHAT ABOUT
SADE BALOGUN?
When you attend A-list parties, one face that you will hardly miss is that of Lagos society woman, Sade Balogun. She has been rocking the social scene for the past 30 years and has not slowed down. One thing you will notice at a glance is her glamorous dressing, which readily fits her well- structured stature. Do we need to tell you about her headgears and make ups that are always on-point? She has a great physique and she is well connected within the inner circles of the social milieu. She is also a titled chief in Itori, Abeokuta. She was at the event to party with her friend turned sister.

LAGOS SPEAKER PRESENT
The number 3 man in Lagos State, Honourable Speaker of the Lagos State House of Assembly, Mudashiru Obasa, was also at the event. He sat at the head table, dined and wined before he took his leave.

WHY JAGABAN
AND GOV AMBODE MISSED THE PARTY
As expected, many were expecting and waiting for the arrival of the APC National Leader, Asiwaju Ahmed Tinubu and Lagos Gov, Akinwunmi Ambode and their wives because they always celebrate with Chief (Mrs) Kemi Nelson, who serves as a frontier for women in the party, but they missed the party, owing to the loss of Deji Tinubu, the Special Adviser on Commerce and Industry, in Lagos and also a Nephew of Asiwaju Bola Ahmed Tinubu.

BETWEEN
KEMI NELSON AND SHADE BALOGUN
That Chief (Mrs) Kemi Nelson and a Lagos society woman, Sade Balogun, are close is simply stating the obvious because they have the same circle of friends outside politics. They are both very close and share a strong bond. Mostly, you see them sitting together at a table and their friendship has gone beyond the two, extending to members of their families. When Mrs Sade Balogun stormed the thanksgiving service, she made her way straight to the head table and was welcomed by Yeyesewa herself and her sister, Mrs Biodun Laja.

ONE MINUTE SILENCE FOR DEJI TINUBU
If not that the thanksgiving service had been earlier slated and planned for the day, it would not have held, owing to the unfortunate incident of the sudden death of an APC member and Lagos State Special Adviser On Commerce and Industry, Deji Tinubu, who is a nephew to Jagaban. Members at the party all stood up for a minute silence to honour and pay their last respect to Deji.

DARE MELODY, LEADS PRAISE AND WORSHIP
To entertain guests was juju singer, Dare Melody, who dished out series of high praising songs to God and guests enjoyed his delivery by dancing and singing along.

BEEJAY SAX PERFORMS
If you are a lover of good music and you have listened to popular saxophonist, Bee Jay Sax, then you can say he knows how to keep people on their feet dancing for several hours. He was contracted specially by Chief (Mrs) Kemi Nelson, who always loves to listen to him when he plays, to perform for just a few minutes and guess what, he enthralled the guests for close to an hour.

HUGE PRESENCE OF LAGOS STATE OFFICIALS
The thanksgiving service had in attendance many top civil servants and politicians in Lagos State. It was as if all government parastatals were shut down for the shindig as many trooped in. It witnessed mostly women from all constituencies made up of confluence 57(LG/LCDAs) and permanent secretaries from different commissions. Among the APC loyalists, who graced the event were. Hon. Mojeed Alabi Balogun, Chairman Ikeja Local Govt. Damola Tinubu Kasunmu of House Of Assembly, was part of the organising committee, Yinka Babalola was the coordinator, confluence 57. Alhaja Fasanya from Agege, Hon Biodun Faleke, Fmr Agege Local Government Chairman, Adaranijo, Iyalode of Ikeja, Damia Adeogun, LCDA Chairman, Chief Adeokun Adetoro, Dr. Adefemi Taiwo, Iyabosola Williams from Aguda, Bisi Eletu, Alhaja Dupe Adelakun, Alhaja Abe from Alimosho, Funke Sunmola from Somolu, Lagos Speaker, Obasa Hon Adewale Jafojo and many others.

JIDE OBANIKORO STANDS IN FOR DAD
Sighted looking dapper like his dad was Babajide Obanikoro, the son of a former minister, gubernatorial candidate, Senator Musiliu Obanikoro. He got into the venue midway and went straight to the head table to exchange pleasantries with other party chieftains present especially Chief (Mrs) Kemi Nelson.

RETINUE OF FEMALE POLITICIANS
What do you expect when a women leader is holding an event? Definitely, the venue will be jam packed with women. The party was 80 percent dominated by women. There were many female delegates members from all the 57 constituencies in Lagos. They came in full force and were seen wearing different types of styles, with the different Aso-Ebi they picked at each constituency for the event.

A New Era for the Nigerian Wine...