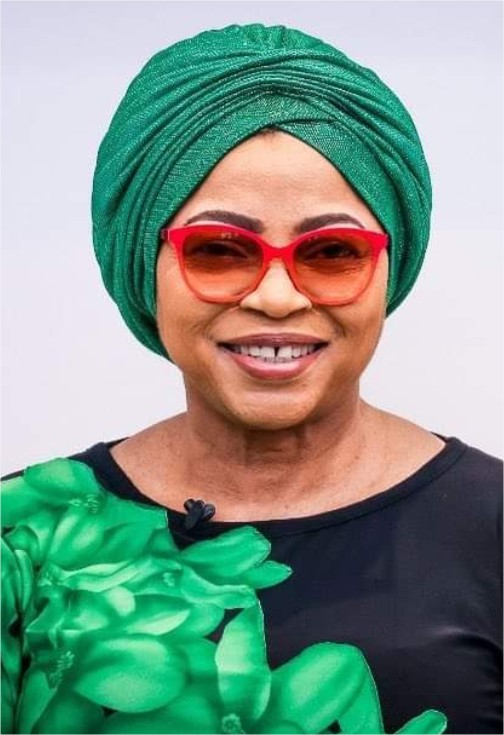 This is big news. It is the news of the forthcoming birthday of Mrs. Folorunsho Alakija. She will be 70 next month. Mrs. Folorunsho Alakija is a billionaire businesswoman and big time philanthropist. She is involved in the Fashion, Oil, Real Estate and Printing Industries. She is the Group Managing Director of The Rose of Sharon Group which consists of The Rose of Sharon Prints & Promotions Limited, Digital Reality Prints Limited and the Executive Vice-Chairman of Famfa Oil Limited.

Folorunsho Alakija was born on 15th of July, 1951 to an upper-middle-class family; her father was Chief L. A. Ogbara of Ikorodu, Lagos State. Alakija attended her nursery education at Our Ladies of Apostles, Lagos from 1955 to 1958. At the age of 7, Folorunsho Alakija travelled to the United Kingdom to continue her primary education at Dinorben School for Girls in Hafodunos Hall in Llangernyw, Wales between 1959 and 1963. On the completion of her primary education, Folorunsho attended “Muslim High School” in Sagamu, Ogun State, Nigeria. She then returned to England for her secretarial studies at Pitman’s Central College, London.

Folorunsho Alakija started her career in 1974 as an executive secretary at Sijuade Enterprises, Lagos, Nigeria shortly after completing a Secretarial Course at Pitman’s Central College London. She moved to the former First National Bank of Chicago, which later became FinBank now acquired by FCMB (First City Monument Bank)  as the Executive Secretary to the Managing Director. She became the new Head of the Corporate Affairs Department of the International Merchant Bank of Nigeria (formerly First National Bank of Chicago), and later on became the Office Assistant to the Treasury Department. Shortly after her career in the banking world which lasted for 12 years, Folorunsho Alakija took up new challenge which was driven by her passion for fashion to study fashion design at The American College in London and the Central School of Fashion.

After her return to Nigeria, she started her first fashion label known as Supreme Stiches, which was later renamed The Rose Of Sharon House of Fashion in 1996. Within a few years, as Rose of Sharon House of Fashion, it became a household name. As national president and lifelong trustee of the Fashion Designers Association of Nigeria (FADAN), she left an indelible mark, promoting Nigerian culture through fashion and style.

In May 1993, Folorunsho Alakija applied for the allocation of an oil prospecting license (OPL).

The license to explore for oil on a 617,000-acre block—now referred to as OPL 216—was granted to Alakija’s company, Famfa Limited. The block is approximately 350 kilometres (220 miles) southeast of Lagos and 110 kilometres (70 miles) offshore of Nigeria in the Agbami Field of the central Niger Delta. In September 1996, Folorunsho Alakija entered into a joint venture agreement with Star Deep Water Petroleum Limited (a wholly owned subsidiary of Texaco) and appointed the company as a technical adviser for the exploration of the license, transferring 40 percent of her 100 percent stake to Star Deep.

Once word got out they struck oil, the Nigerian government snatched a 40% stake. Later, they took an additional 10%.For twelve years, she fought the government in court. The government argument was if Folorunsho Alakija and family were allowed to keep their bloc, they stood to make $10 million a day. Still, Folorunsho persisted and in the end she won.

As of 2014, Folorunsho Alakija is listed as the 96th most powerful woman in the world by Forbes.

Folorunsho married a lawyer, Modupe Alakija of the Adeyemo Alakija family, in November 1976. They reside in Lagos, Nigeria, with their four sons and their grandchildren. Her nephew is DJ Xclusive. In June 2017, Folorunso’s son Folarin Alakija, married Iranian model Nazanin Jafarian Ghaissarifar in a wedding at Blenheim Palace in England. Media reports suggested the event was one of the world’s most expensive weddings.