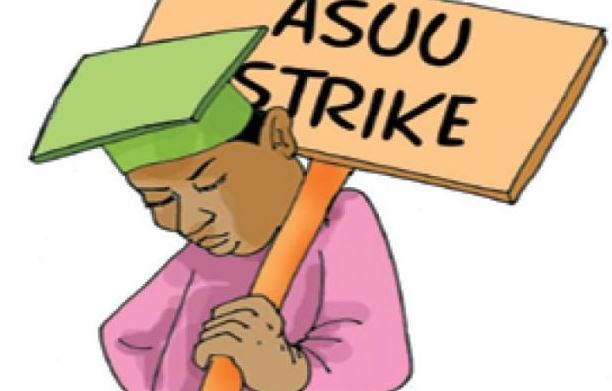 University teachers are set for another strike over the controversial 2009 agreement they reached with the Federal Government among other issues.
A meeting of the National Executive Committee (NEC) of ASUU will hold today in Abuja ahead of the action.
Yesterday, all chapters of the union nationwide held a congress as directed by its national body to decide whether or not to go ahead with the planned strike.
The options given to them are: Whether it should be total and indefinite strike, one month strike, one week notice, and no strike at all.
This followed the directive sent to branches by ASUU National President Prof. Biodun Ogunyemi as he was mandated by the NEC meeting held at the Nasarawa State University (NSU).
Chairman ASUU-Lagos State University (LASU) Dr Isaac Akinloye Oyewunmi said yesterday that the chapter resolved in favour of “total and indefinite strike”.
In August last year, the union threatened strike over thengovernment’s failure to implement the 2009 agreement. According to the reports gathered by Eyes Of Lagos, Coordinator of ASUU (Lagos Zone) Prof Olusoji Sowande, said the union was tired because efforts to get the agreement honoured were fruitless.
The union listed some of the unresolved issues as: Breach of the Memorandum of Understanding (MOU) for the 2009 FG/ASUU Agreement on financing of state universities; breach of the conditions of service; refusal to honour the Earned Academic Allowance (EAA) and re -negotiation of the agreement.
In January, ASUU staged a one-week warning strike. Union officials said the Federal Government is owing universities over N880 billion in intervention fund.
Other issues according to ASUU oficials are: The Federal Government’s foot-dragging over ‘funds for the revitilisation of public universities, non-release of NUPEMCO operational licence, non-payment of earned academic allowances, payment of fractions/non-payment of salaries, retired professors and their salaries and university staff schools’.
The official said ASUU explored all channels to make the Federal Government see reasons but said: “It seems the Federal Government is more concerned with buying exotic vehicles for the National Assembly while public education and lecturers continue to suffer owing to dilapidated infrastructure.”
He said the union was angry at the failure of the Federal Government to release the operational licence for the union’s pension managers after collecting N1 billion since two years ago.
“Till date the government is owing the intervention funds to the tune of N880 billion. When we approached them for licensing of Nigerian Universities Pension Management Company (NUPEMCO), they asked us to go and bring registration fee, which is supposed to be N150million. Till date, we have paid government N1 billion and our money has been with them for two years and they are not saying anything.
None of this pension administrators can fulfill the University Miscellaneous Act which says university professors must retire with their full money.
The money must have been invested and yielding interest for somebody. We are demanding our licence and funding of public universities.”
ASUU Strike Looms Over Controversial 2009 Agreement was last modified: August 11th, 2017 by Arinze Ago

Philippe Coutinho Is “Definitively” Not For Sale Liverpool Insist

Major earthquakes of the past 30 years

Today’s Children Are Not Cut Out For...