Home News At 36, I Am The Youngest Oba In EKITI State – New King Of ISABA Ekiti, Oba ADEYANJU
News

At 36, I Am The Youngest Oba In EKITI State – New King Of ISABA Ekiti, Oba ADEYANJU 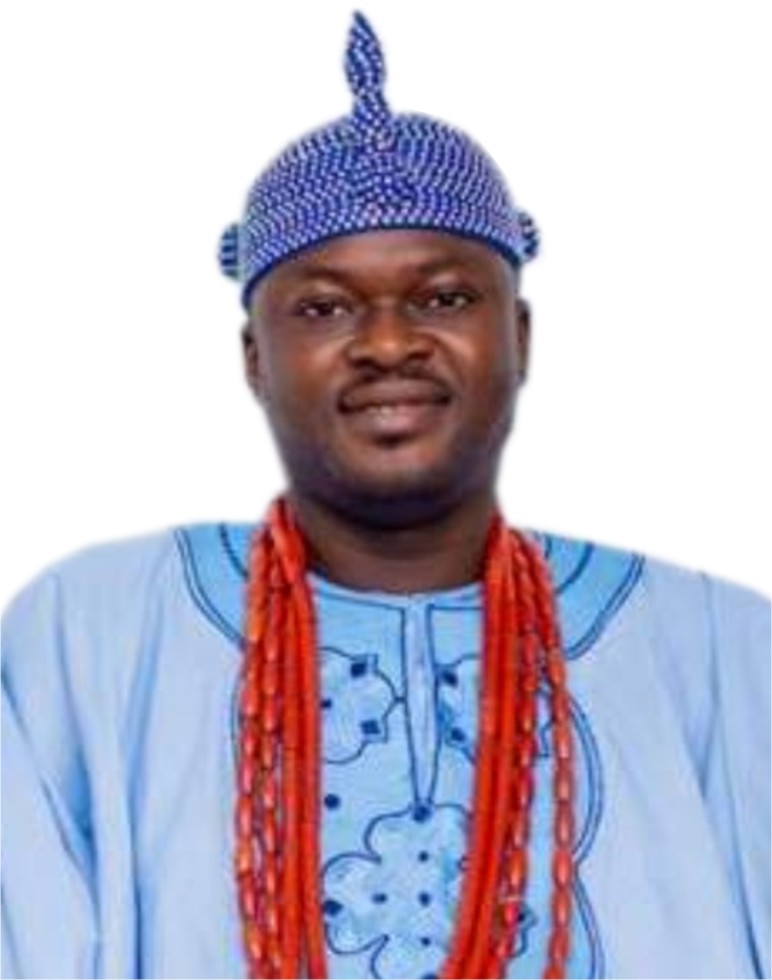 HRM Oba Olanrewaju Olasunkanmi Adeyanju is one of the youngest Kings in Ekiti state. He is 36 years old. He was installed as King a few months back after the demise of Oba Samuel Idowu Adesanya Oyabade.

The throne of Asaba of Isaba Ekiti became vacant on the 18th October 2018 following the demise of late Oba Samuel Idowu Adesanya Oyabade, the Oluwagbamigbe II, who ruled for many years.

In November 4th 2019, His Royal Majesty, Oba Olanrewaju Olasunkanmi Oluwaseun Adeyanju (Alaaro II), the Asaba of Isaba Ekiti has installed the 16th traditional ruler in Isaba Ekiti. He is obviously one of the youngest Obas in Ekiti State, presently.

He is from the Ijisun Ruling. Isaba Ekiti is one of the popular towns in Ikole local government area and Ekiti state as a whole. The throne of Asaba of Isaba Ekiti is a grade B traditional ruler among the Ekiti state council of Obas. This town had produced well over 10 professors and music icons; the likes of late Elemure Ogunyemi and Ambassador Segun Babayemi, a veteran broadcaster. Kabiyesi is a member of the Nigerian Institute of Management and also an active member of Nigeria Air Traffic Controllers Association, where he was the Portharcourt Branch Secretary until he was transferred to Akure Airport in 2019. Kabiyesi is happily married with two lovely children. He is a devoted Christian and an astute administrator. Last week, City People’s ADEOLA SHITTU, spoke with him in Ekiti and he opened up on his life and plans for his town.

Let me start by congratulating you on your installation as the 16th Asaba of Isaba Ekiti. Briefly tell us who HRM Oba Olanrewaju Olasunkanmi Oluwaseun Adeyanju is?

Thank you. I am His Royal Majesty Oba Olanrewaju Olasunkanmi Oluwaseun Adeyanju (Alaaro II), the Asaba of Isaba Ekiti, in Ikole local government area of Ekiti State. I was born 36 years ago to Late Omoba Olufemi Adedoyin Adeyanju of Ijisun Ruling House in Isaba Ekiti and Olori Eunice Titilayo Adeyanju (EyelobirinIjisun). I was born in Lagos State and was the fourth child of seven (7) siblings. I started my elementary education at an early age. I attended Richway Nursery and Primary School and then Monikab Nursery and Primary School, both in Ikosi-Ketu, Lagos and later moved to Oluwalogbon Primary School Ketu where I obtained my Primary School Leaving Certificate in 1992. I proceeded to Unity Secondary School, Oye-Ekiti (now Government College Oye-Ekiti) as a Boarding student and graduated in 1999. During my Secondary days in Oye, I had the opportunity to visit my town and know more about my town. I went to Kosofe College, Ketu [I was back in Lagos in other to complete my O’level which I pass in flying colour in 2001]. I proceeded to Lagos State University, Epe Campus for Pre-degree Science programme. I had wanted to be a Medical Doctor but my Jamb score was 230. And after writing jamb 4 times and my father was not ready to lobby for me despite scoring 230 marks but I was later admitted into LASU, Ojo Main campus where I bagged my Bachelor of Science Degree in Geography and Planning. While in school, I worked with his father with determination and prudence as we both built and established Fortress Gas Cooker Industry which specializes in the manufacturing of industrial and domestic gas cookers and ovens, and this I was able to continue after my NYSC.  I did my National Youth Service (NYSC scheme) as a Teacher, Government Girls Secondary School, Hardawa in Misau LGA, Bauchi State in 2009/2010. After, I continued my work in Fortress Gas Cooker Industry until I got a job offer with Nigerian Airspace Management Agency, a federal government parastatal in the aviation industry as an Air Traffic Control Officer and was immediately sent for a 24 months training at the Nigerian College of Aviation Technology (NCAT), Zaria, Kaduna State where I graduated in 2014 and obtain my Diploma in Standard Air traffic Control (ICAO Syllabus 052 & 053). It will interest you too know that I learnt how to fly an airplane before even learning to drive a car. I was immediately posted to Port Harcourt International Airport, Omagwa, Rivers State, where I had my Aerodrome and Approach Procedural Rating under 9months. I grew to become a Senior Air Traffic Control Officer. I enrolled for his Master’s degree MBA in Aviation Management with the University of Petroleum and Energy Studies (UPES), Dehradun, India in 2017.

How do you feel?

Thanks very much. I return all glory to God Almighty who made it possible for me to be crowned the 16thAsaba of Isaba Ekiti because I was not the only Prince in the race, but grace speaks for me. Grace speaks on my behalf. I feel I am under the grace of God. I am happy. I was well received by my people and all I see is love. I am happy and honoured to ascend the throne of my forefathers. It can only be God and I use this medium to appreciate all Isaba Ekiti sons and daughters, the kingmakers for their support and effort during the race.

What was running through your mind when you were approached to contest for the throne?

At first, I was not interested in the Obaship race reason best known to me. Though I am a prince from a royal family in Isaba Ekiti but when I was approached to contest for the race, I felt destiny has come to stay because everything went smoothly and this made me feel that destiny has always had a way of proving itself. So I will say grace found me and destiny speaks for me. When God instructed me to go and lead my people and there was absolutely nothing I could do to it rather than for me to obey his voice. In a nutshell, when I was approached, I felt it was another package from God to me and my entire family. So I accepted it and today the rest is history.

Was there any prediction or sign that you were going to become a King?

Not that I can remember while growing up neither my father nor mother told me anything though. I am born into a royal family; my grandfather was a king then. I will say no prediction for me but one thing I believe is that destiny can’t be changed.

It was learnt that your late father was to be installed the Asaba of Isaba Ekiti, the position you occupy today. Share more light on this?

To my best of knowledge, my predecessor joined his ancestors a month after my late father pass on. History has it that Isaba Ekiti have their unique way of selecting an Oba then. The late monarch was there irrespective of whoever is supposed to be there, it is God that chose him, even the bible makes us understand that he is the one that chose the leader, you can’t be there if God didn’t choose you. It might have been said that my late father was going to become next Asaba of Isaba Ekiti after the demise of the late monarch but God in his own power object to it, like I said my father dies 3 months before the demise of my predecessor, it might have been rumour back then but God says no.

You will agree with me that as at today in Ekiti state, you are the youngest traditional ruler, how does this make you feel?

I won’t agree to this submission that am the youngest traditional ruler in the state until it is proven otherwise. Rather I will say, I am one of the youngest Oba in the state. I feel happy and honoured for this grace and privilege of God to serve my people in this capacity. I ascend the throne in 2019 at the age of 35 years old and I will be leading a town, hmmm it’s tasking and challenging, I believe God will lead me. During my reign as the Asaba of Isaba kingdom, I want to assure my people that the town will witness rapid change and development growth.

Last year you ascend the throne as the Asaba of Isaba Ekiti, what has been your impact or plans for your community?

You will agree with me that there is no place like home and it will be too early for me to speak on my contributions or achievement in the town but for record purpose, I will say have been able to unite all descendant of Isaba Ekiti home and aboard because before I ascend the throne the town was divided into 4 groups. But today I will say we are making progress in uniting all Isabason’s and daughter’s, the fact remains that once we see ourselves as one we will be able to define the goals and development for the town. As we speak, we have embarked on one or two developmental projects and some other social project that will be review as time unfold. We have plans and like I said we will be unveiling it one after the other and with the support of all the descendent of Isaba, I believe we will achieve more.

Until you became the king, you were an Air traffic control officer, will you say it had prepared you for this position?

Though I was born in Lagos but I know our culture and heritage and am aware of the value our people place on it, I will say am ready and well prepare. For some years I worked as Air traffic control officer at Nigerian Airspace Management Agency this has also prepared me in a lot of ways, in terms of relating with people, mentoring people and building myself for leadership position like this. I have gain lots of experience and insight on how to manage people.  I am the Air traffic controller in Akure, Ondo State, I will say am fully prepared for this and am ready to promote our culture and value.

As Kabiyesi there are things you won’t be able to do again, how do you plan to cope with your new lifestyle?

Well like I said, it was as if God knew I was going to become an oba, so he had prepared me. I don’t club, my social function had a limit, I will say have always been on the reserve sit. I know what comes with this position and I will say it’s very easy for me to adjust to it because of my past way of life. Am good to go.

At 36, I Am The Youngest Oba In EKITI State – New King Of ISABA Ekiti, Oba ADEYANJU was last modified: May 11th, 2020 by Adeola Shittu

Why Alhaja Shine Shine Is Well Respected In Skincare