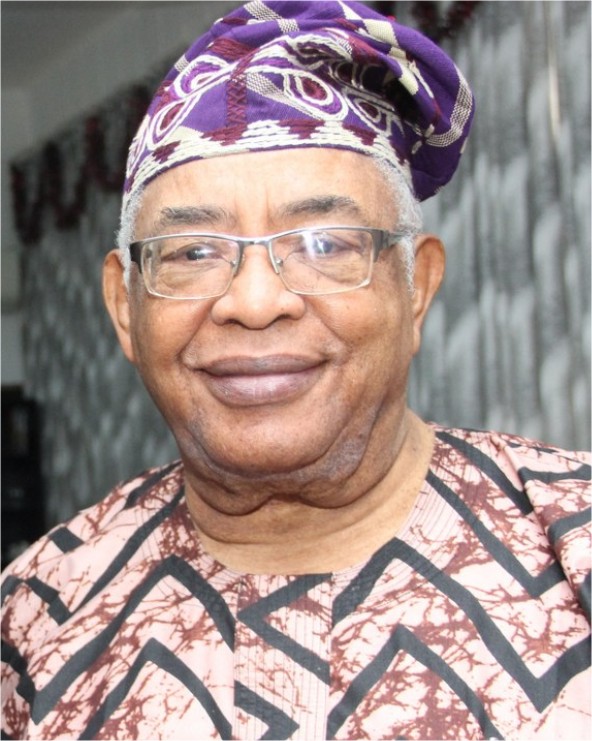 If you meet Dr. Oluyomi Finnih for the first time you will be amazed at how cool, calm and collected he is. He is a man who is at peace with himself. He is constantly in deep thoughts. He is highly cerebral, and has this penetrating look that makes you know he is deeper than his outlook suggests.

He always has a permanent smile on. He is painstaking. He is thorough.

For those who don’t know him lets quickly tell you about this Lagosian (Omo Eko) who is a guru in medicine.

He is a big name in Medicine.  He has been a Medical Doctor for 58 years. He is an Obstetrician & Gynaecologist. He studied Medicine at the University of Ibadan, before he started work with the Civil Service and went into private practice 1978.   He set up Finnih Medical Centre in GRA, Ikeja in 1983 and he was Medical Director/Consultant Obstetrician & Gynaecologist for so many years.

The big news is that Dr. Finnih is 78. This popular Lagos doctor and politican turned 78 on 9th February. And he marked the day at his Lagos residence. It was a low key ceremony, as members of the medical profession & Lagos APC leaders dropped by to celebrate with this accomplished medical doctor who is a specialist in the field of Gynaecology and Obstetrics. He has retired from FINNIH Medical Centre located at 42, Oduduwa Crescent, Ikeja GRA. Though he has since retired from active medical practice, the hospital still runs efficiently.

Lately, he has been very, very active in Lagos politics. He is a  member of a prestigeous political body called Governors Advisory council, made up of a few elders from the Lagos APC. It is an advisory council of elderstatesmen. Last week, City People Publisher, SEYE KEHINDE led a team of reporters to talk to him about his life. He also spoke about why many young couples have been suffering infertility for many years now. Below are excerpts of the interview.

You celebrated your 78th birthday a few days back and you played the role of a perfect host as you made sure everyone had something to eat and drink. What went through your mind on that day?

I was happy, just like anybody will feel. I was quite please and delighted. Moreso, it was meant to be a minimal indoor celebration. But of course, the turn out was beyond what I envisaged, that made it more pleasing to me. I was so quite elated in having so much pleasant people, me.

At 78, Dr. Abayomi Finnih is still actively involved in so many things like Politics and Medicine. It seems there is no slowing down for you… How do you get the strength to play all the roles?

One again its the grace of the Almighty. Two, its  the training I had. If you go through medical training, and you let it pass through you, there is a strong possiblity that you will be a well constituted personality, full of energy and zeal. Most of the things I do, is because I believe in them. And if you believe in what you do, then you don’t need to look for energy to do them because the zeal is in you, and you can just go on and fulfil your dreams. That is it.

You know as a student of the University of Ibadan, we had quite some political inclinations there. I was fairly active in the formation. From then on, I have been looking for an opportunity to really display what I believe I could do. But then of course, the practice of medicine is such a tedious one, that does not allow for much diversions.

But as we went through I got sucked into it with all the political activities during the military regime. From then on, there is no looking back, because we struggled to get out of the military dispensation. We felt if we do that then what are we going to put in place to replace what has happened to us since 1966, that would be a worthwhile alternative. So, I got involved and the rest is history. We are still in it. We are carrying on and we hope to keep carrying on as long as the feet can continue to move.

You are a member of the Governors Advisory Council, a major group within Lagos APC. What does the group do? What has been your experience as a member?

Yes. Its a group that was put together. It is a group of Elders who have had experiences at various levels of politics and politicking and so we have been put together to help, in advising the governor, to ensure that whatever he is doing is in the interest of the state and the nation and the people. And where there is need for adjustments we suggest to him. We can only suggest, like the title dictates, it is advisory. He is the Principal. He is the Chief. And the buck stops on his table. But of course, he has the opportunity to lean on the stature of a lot of us who have been around. We offer a supportive advice on different fronts. Its a private thing.

Not many 78 year olds look refreshingly fresh like Dr. Finnih, whats the secret?

I presume you mean from the physical point of view. If yes I want to say, again that is the grace of God. I don’t think any human being has a formular for how you would look in 10, 15, to 20 years time. Its the Grace of God.

If you follow all the very basic things, you keep calm, you don’t get ruffled, you live in peace with everybody as long as it depends on you. You try to be good to people, you try to be nice to people and you make sure you contribute to their welfare as much as possible, particularly of the poor and the needy, almost invariably the favours will come back to you.

Your body will tell you that you are on the wrong lane. So, you have to adjust and you have to ensure that you keep to the basic tenets like, rest, eat well, relax and exercise. Exercise at this age does not mean running round the tracks. It means to be taking short walks, or long walks as much as your body can tolerate. And be friendly with people. Avoid brushes.

It helps to reduce tension and gives you the opportunity to relax and feel good. But you may now ask, how do you avoid brushes in a political arena? Well. Its a gift, in the sense that if you develop your mind to a point, in life generally and in the political terrain, then you have the opportunity of being able to just listen to people and let them bury out their anger and say what they want to say. And you can subsequently advice or take decision. But if you go into situations of war, war, war, war. Jaw, jaw, jaw all the time, then you are likely to fade off very easily.

That is the way you can make sure you can marry the 2, of sometimes the ugly terrain of politics and your ability to remain friendly with everybody, as long as it depends on you.