At The Remembrance Of Alhaja ABENI RAJI OLUMO In LAGOS 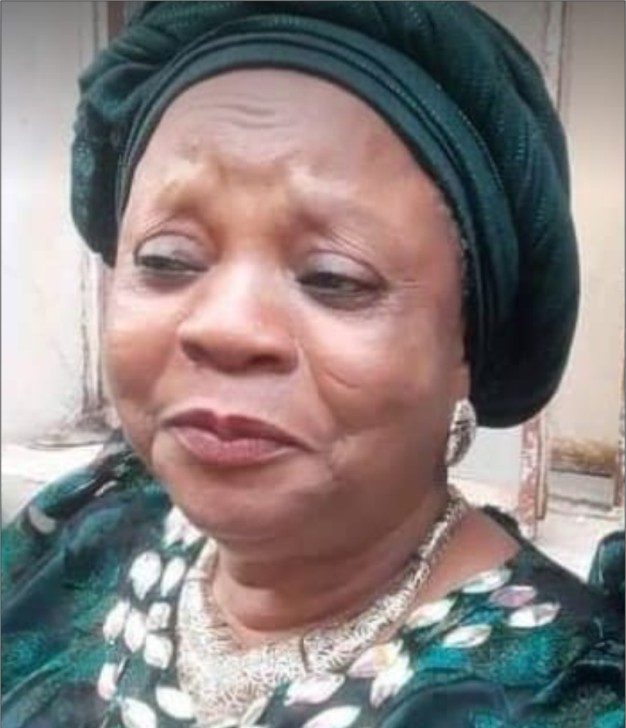 On Saturday, January 8, 2022, the Haven event centre inside Ikeja GRA was completely turned upside down as the movers and shakers of the Lagos social scenes came in their numbers to celebrate the life and time of a popular businesswoman and mother of entrepreneurs, Alhaja Abeni Raji Olumo who passed away exactly one year ago.

The party had everything required of a classy Lagos owambe evening and more. Politicians, fabric merchants, gold merchants, Nollywood stars as well as party rockers were spotted trooping in from all directions. At about 4:00 pm, the event had started gathering momentum and about 2 hours later, the auditorium was already filled to the brim for a night of fun and entertainment.

City People’s Brands Editor, DAMILARE SALAMI 08155134152 was there in the company of a senior Photojournalist, ABDULRASHEED SANNI and in this report, he brings you all the details of all that went down there, enjoy.

Alhaja Falilat Abeni Raji Olumo was a popular businesswoman in Lagos who made a big name for herself by helping others. She was very popular and constant on the Lagos social scene. She hailed from Gbogan in Osun State and is popularly known as omo onikoyi eso. She died at the ripe age of 78 in January 2021 but before then, she had made her mark in the fabrics, jewellery and political sectors of Lagos. Mama had beautiful children and grandchildren and her later end was surely better than her beginning. She was survived by her children, Alhaja Abiodun Odumosu, Babatunde Abdulrauf Raji, Toyin Taofeekat Quadri and Oluwafemi Ibrahim Olumo aka Lala of Lagos.

The Haven event centre in Ikeja GRA, Lagos, is one of the biggest and most classy event centres in that vicinity. Everyone knows that Ikeja GRA is the home of the big boys on the Lagos mainland; therefore, it is a very restricted area. The reserved area became a mini-pilgrimage centre on the day all for Mama Raji Olumo. All roads became very busy as men and women trooped in from everywhere. Give it to the event decorators who did a world-class job at the event. For those who frequent the Haven, they realized that it was practically transformed for the remembrance party. It was altogether befitting for the children and family who had seen it all in life but still celebrate a loving mother who lived a good life for them.

ALL SHADES OF BLUE ASO-EBI

From navy to sky and royal blue, the event was painted in all shades of blue Ankara Aso-Ebi. That is not to say that those in expensive HOH lace were not in attendance. The men also stunned in sky blue senator material with a navy blue cap to match. The event would have passed for a fashion show. This was simply because there were big babes who rocked the Aso-Ebi in different styles and shades. From mermaid gowns to mini and skimpy skirts and gowns, the pretty babes at the event left jaws widely opened with their very tempting fabulous outfits. Whether the sexy outfits were intentional or merely fashion styles, they added the needed vibe to the party.

The beginning of any event matters a lot because it gives the guests what to expect as the party unfolds. Mama Olumo’s remembrance party started on a very high note. It opened with a veteran Nollywood actor and poet, Ajobiewe and his son, Azeez going the way of tradition to entertain guests with what the Yoruba people call Oriki. He praise-sang the deceased as well as her children in their local dialect. He went deep into their history with some wonderful panegyric delivery. Sulaiman Ajilara Ajobiewe is one of Nigeria’s Legendary Esa Oriki Orile exponents. Born in Ila Orangun in Osun State, He started his craft in the year 1962 at the age of 7 years. He has transverse many of the western states in Nigeria with what he knows best “ Esa Oriki Orile”. In the Yoruba traditional setting oriki is praise poetry which is often used to arouse people and connect them to their roots.  Oriki can take the form of a local chant consisting of praise songs that identify a family or individual with his or her roots.

Do you remember that we mentioned earlier that different people from all walks of life were in attendance? Let us start with the entertainment industry. Veteran broadcaster cum actor, Doyin Kukoyi was among the big names in the industry that stormed the event in style. At her arrival, a lot of people were expecting her to mount the stage because everyone knows that she’s a compere and a very good one at that. However, Doyin Kukoyi didn’t do that, she just took her seat in the VIP corner, enjoying the vibes and entertainment the party offered. Also spotted was Dayo Amusa, a young and dynamic movie producer and actor. Dayo equally stunned in the party Aso-Ebi and to say the truth, she looked very beautiful in the attire. What about Bisi Ibidapo-Obe who is poised to celebrate her birthday in a few weeks? She also came to the party with a banger! Spotted among her friends, Bisi Omologbalogba was busy taking selfies with her fans who would not allow her to enjoy the party as she would have loved to. In all, they all made it fun.

LET’S TELL YOU ABOUT ABEKE’S CORNER

Oluwatoyin ‘Abeke’ Olumo is one of the children of the late Alhaja Raji Olumo and she had a stand to herself at the event. Her friends were one of the early birds and they stayed till the end of the party in the early hours of Saturday. They all came in the lace Aso-Ebi and that is not just about them, many of them are good dancers. They enjoyed the party and when it was time to show their worth with cash, they surprised a lot of people. Of course, being financially buoyant and spending it has nothing to do with looks but we can testify that these people look it and they have it. Abeke’s friends are all fabric merchants and jewellers. They sell in popular Lagos markets and they are doing well in their businesses.

…LALA OF LAGOS TOO

Mr Oluwafemi Ibrahim Olumo aka Lala of Lagos is one of Mama’s children but we will be very accurate to call him a wavemaker. This popular socialite was absolutely the life of the party. His friends turned up big time and we can tell you that they are big in every sense of it. They came through for the one and only Lala of Lagos and when K1 eventually stormed the stage, the story completely changed. The boys were separated from the men and we can tell you for free that Lala of Lagos and his gang were the men. They made huge statements with cash, babes, and everything in between for a proper night out.

I’m sure that many people were not just wowed by the performance of a young female dancer called Flexible Foot, they were left with their hearts almost jumping out of their mouths. Flexible Foot is a fast-rising Nigerian female ballet and gymnastics dancer. She is an entertainer with a difference. She dances as if there is no bone in her body, her twists and turns are out of this world, hence, the name flexible foot dancer. She was one of the side attractions at the event and she made a lot of money for herself after a highly energetic performance.

ROYAL FATHERS WERE PART OF THE FUN

The Olowode Of Owode Egba, Oba Kolawole Aremu Sowemimo was spotted at the event, he came with his wife, Olori Toyin Sowemimo. She is a very beautiful woman who dresses well. Call her a Style icon and you won’t be wrong. The town Owode Egba is close to Mowe Ofada. Kabiyesi came to honour the children of the deceased and he came in his royalty. Also in attendance is the incoming Oloto, Hon Prince Fuad Oloto who also stormed the event in glamour. The incoming Oloto made fashion statements and also did well to show gestures to his hosts.

Hon. Olusegun Olulade needs no introduction. He was a former Lagos Lawmaker who represented Epe Constituency II. He had contested to represent Epe at the House of Representatives but lost out at the primaries. But he will always be remembered as one of the most glamorous and accomplished Lawmakers while in the Lagos House of Assembly. Popularly known as Eleniyan, he had an eventful two terms while at the Lagos Assembly.  He was at the event and led the group of politicians that came. Their table was eventful with various discussions and of course, politics was a big part of it.

DJ TRICH AND THE DORIME VIBE

For more than 8 hours before the arrival of the live band, DJ Trich was on standby, dishing out different party vibes for the guests and we must tell you that they enjoyed it. They danced and sprayed cash even before the arrival of the band, all thanks to the unrelenting DJ Trich. The high point of the event was the arrival of the prestigious wines for the ballers at a party. It came in the usual club manner, lights were changed to the mood one and the masked wine bearers came along accompanied by the DORIME soundtrack… It was really enjoyable.

Many of the guests waited almost all night for the King of Fuji Music, Alhaji Wasiu Ayinde Marshal, K1 De Ultimate who was travelling down from another event. He eventually arrived and played till dawn. Was it worth the wait? You already know the answer. K1 will not give you a below the par performance. At the event, he delivered optimally and the guests went home very happy.

At The Remembrance Of Alhaja ABENI RAJI OLUMO In LAGOS was last modified: January 25th, 2022 by Damilare Salami

Lagos Businesswoman Mariam Toyin Lawal On 15 Yrs Of Her Business