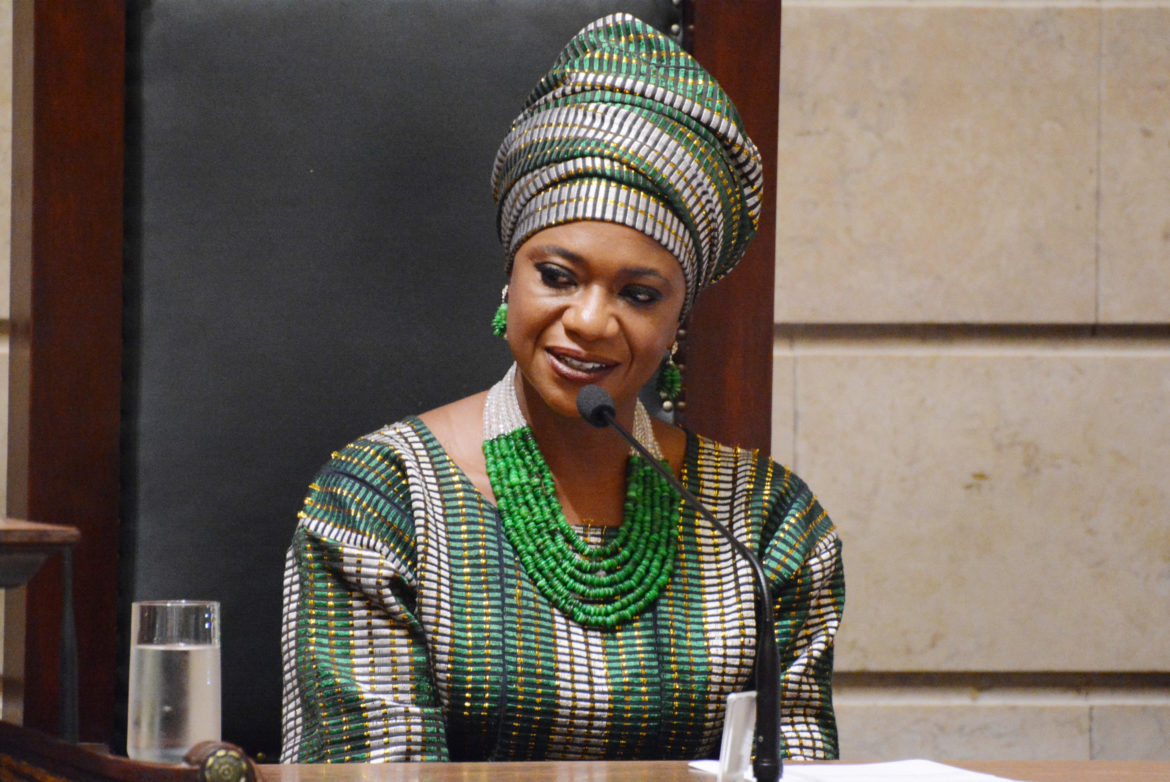 Princess Folashade Adeyemi is the first daughter of His Imperial Majesty, Oba Lamidi Olayiwola Adeyemi (the 3rd) the Alaafin Of Oyo Empire. She is popularly known as Arewa Omoba. She is the CEO of Arewa House of Culture. She is a Cultural Consultant and Ambassador of the Yoruba race and these responsibilities to build cultural bridges amongst the Yoruba race makes her one of the most prominent of Alaafins children.

Over the years, she has taken over cultural events and festivals such as Sango, Egungun, Isese day, Oranyan hence mixing the old and the new with a blend of culture. She has bagged several awards owing to her Giant Strides in promoting the Yoruba culture and tradition. Her Love for Culture and tradition has made her travel across the globe.

She was a guest of honour at the recent installation anniversary of Iba GaniAbiodun Ige Adams, the 15th Aare Onakakanfo of Yoruba Land] and she granted an interview with City Peoples Society Reporter TITILOPE OGUNLEYE where she spoke about her life, her father and the palace.

You are an Ambassador of Oyo Kingdom and that makes you represent The Alaafin of Oyo regularly.

I think it goes beyond being an Ambassador of Oyo kingdom, but Oyo Empire as a whole for Yorubas. My job is beyond Oyo kingdom alone but across the origin of the Yoruba race. You can trace the culture, dialect, food, mode of dressing, chanting, bata, gangan, agriculture and more during the reign AlaafinOranyan. Alaafin Oranyan discovered Oyo Empire, so basically  Oyo is Yoruba, so my job is beyond Oyo kingdom but to the Yoruba race as a whole. The great Alaafin turned 80 in October and we celebrated him big. He is young at heart and he has promoted himself a lot but what I am doing is packaging what he taught me and enhancing his legacy. I started with passion but it has grown beyond passion into a career for me. A lot of continents are contacting me to organize programmes for them and I have been able to connect people back to their root. So for me, it’s passion that has turned into career and the volume of it is too bearing but I am coping.

How do you feel being the first Daughter of the great Alaafin of Oyo?

It comes with great responsibilities because firstly it is like I don’t have a personal life. Although I have an older brother who is the Aremo and as the Yorubas used to say that Egbon lo leru, meaning the older carries the burden but you know we women hold it together. I have to be around anytime we have any activity and you know Baba can’t be everywhere at every time, so I have to represent him. Sometimes when I even go on my own, people will say oh, Baba is here and that comes with a great responsibility. I am also trying to mix the modern with the old and blend it with culture. It is a tough and demanding task.

For how long have you been representing the Alaafin of Oyo Empire?

I started on my own 10 years ago, but I have spent 8 years representing Oyo Empire and also volunteering as Baba’s cultural consultant.  I am not going to say representing as such but I will say Baba gave me that opportunity to groom and challenge me. Now I keep challenging myself every day. I will be doing more independent programmes because I already started the Arewa Adeyemi Foundation and Alaafin is the chairman of the foundation. So I think I need to grow more because other states and countries are reaching out for me. That is because I run a consultancy firm and I need more clients. I am thinking I need an agent to manage me because the network is getting bigger by the day.

Being Alaafin’s first Daughter, tell us those things that people don’t really know about your father?

My father Alaafin of Oyo is a great man and he is also a good cook. He makes stew and fries egg. He taught me how to fry egg. He usually backs his children before he became old. He backed all of us when we were growing up. A lot of people know him as a sportsman but not many know him as a bookworm. He loves knowledge and that is why his bedroom and living room is filled with books. He hardly sleeps. He reads and writes a lot. We launched a book at his 80th birthday. He is a composer, producer and dancer. Alaafin has a great sense of humour. He likes to travel out of the country without protocol or entourage. He likes to go to the open market to buy food items and fruit. He represents his culture well in his attire no matter where he travels to. Alaafin is very romantic.

Tell us your childhood days with your Father?

I was born before he became a king so we had a lot of him. He gave us a whole lot of attention. Alaafin cooks for us and he takes us out of the country with him. Baba is very principled and that is why I call him a soldier. He did not spoil us at all. When we ask for money, we have to give account of why we need the money. Baba believes that because he is the Alaafin, we have to be self-sufficient and he taught us to be independent. He taught us to live our lives like we don’t have anyone. I so much enjoy his fatherly love. Even though he is busy now, he still gives out time to advise us. Even now that he has younger wives, he still wakes up at night to check on his wives and children. He makes sure his kids are bathed very well. He is an extremely neat person that can’t tolerate any form of dirt. I saw him washing his bath tub at a time because he felt that they did not wash it enough.  Alaafin does not eat outside. He told us that royalty does not eat anyhow. The silver spoon was there but it was not available all the time. He taught us to survive by ourselves because he believes that one day he would no longer be around us and we will need to survive alone. He has built that name and legacy, so it is up to us to build on what he has built.

We have heard so much about your Dad, tell us briefly about your mum?

My mum is my father’s first Wife and first love I guess. Her name is Oloori Nilola Abibat a.k.a Iya Dodo. She has 5 children and she is still with Alaafin. She just turned 80 last year December.

How old is their love story?

Their love story is close to 60 years. They met through my late Aunty. My fathers sister then attends the same school with my mother and she brought her home and that was how my father kept chasing her.

Alaafin is blessed with a lot children and wives. What is the relationship between you and Baba young wives?

I take my wives out and we have nice times. Although we are not perfect people but we love each other. There are challenges here and there but we get along very well and the palace is full of love. There is respect. People used to say that what I am doing never happens in Polygamous family but we thank God for the strong cord of love.

Tell us about your Educational Background?

I went to Federal Government Girls College Akure, and when I was in form three I travelled to the United States by chance because it was not planned for but as destiny would have it I travelled to Los Angelis. I continued my secondary school and university education in Northrich California University where I studied Marketing and Management. I worked in the banking industry, management, real estate, cashier in a space of 20 years.

Why have you remained single?

It is too much responsibility as a cultural ambassador and I feel I am on a mission with what I do and I feel when it is the right time God will do it.

You look 3 times younger than your age. What is the secret of your young look?

I think it is the passion for meeting people and connecting culture and it is a source of Happiness for me. When you are naturally happy you won’t age. I think it is the grace of God. I don’t exercise but I am a workaholic.

Is there no pressure on you as a princess as to why you have not gotten married?

When you are useful to your community there will not be such pressure. People see me as an asset to my community and I think that is one of the reasons I have not been pressurized, but I will like to be married one of these days and hopefully I will meet the right guy.

You have been home for a while now, and you have been able to promote culture with the fact that you spent most of your years in America. How do you manage it?

All of Alafin’s children were groomed culturally and taught so many things. I could not speak a single of Yoruba when I came and the more I go to Cuba, Brazil, Trinidad and other continent, it helped me to value my language and culture more. It is just a phenomenal story that out of all Alaafins children that stayed abroad I ended up becoming the cultural ambassador. We have black Americans now learning how to speak Yoruba.

Why do you think people say that baba Alaafin is a strict Man?

He is a very principled man. His no is no and yes is yes. When he is supporting anyone he would support all the way. He is not cunning at all. He does not like manipulation, intimidation, oppression of any form. He does not like to be cheated or cheat others. He is principled but very simple.

READ ALSO: I GREW UP A MUSLIM BEFORE I CONVERTED – GENESIS PASTOR, ISRAEL OLADELE

Being Alaafin Of OYO’s Daughter Is A Very Tough Task was last modified: February 4th, 2019 by Titilope Ogunleye

I Grew Up A Muslim Before I Converted – GENESIS Pastor, ISRAEL OLADELE