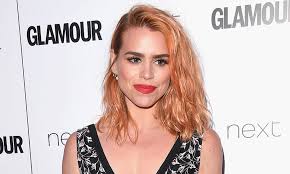 It is the former Doctor Who star’s first child with ex-Tribes frontman Johnny Lloyd, with whom she has been in a relationship for around two years.

A representative for Piper confirmed the news to the Press Association.

A source had told the Daily Mirror newspaper: “Billie and Johnny are delighted. They can’t wait to welcome the new addition to their family.”

Piper, 35, rose to fame at the age of 15 as a pop singer. She has two sons – Winston, nine, and Eugene, six – from her eight-year marriage to the actor Laurence Fox.

Previously, the actress was married to radio and TV presenter Chris Evans, whom she wed in 2001 when she was 18 and he was 35. They divorced in 2007.

In February, Piper said she is in a “good place” after years of feeling negative about her body and being “oversexualised” earlier in her career.

The star, who has battled an eating disorder, told the Sunday Times Style magazine: “I think that’s why, for so long, my desire to hide my body in baggy clothes took hold.

“I like girl’s clothes now because I feel in a better place, but the hangover from that time lasted a while.

“I think I’m in a good place now, or at least a juncture.”