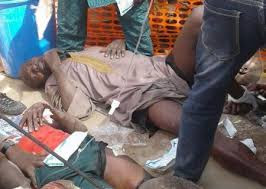 Four innocent lives have been lost after deadly insurgents attacked an IDP camp in Northern Cameroon.

Officials say a double suicide bombing killed four people and wounded 20 others on Friday at a camp housing civilians displaced by Boko Haram militants in northern Cameroon.
A local government official put the death toll at six and said more than 30 people were wounded, 10 seriously, in the twin blasts that tore through the camp in the town of Kolofata at about 6 a.m. local time (1 a.m. ET).
A police officer said four people were confirmed dead. Both bombers also died. Northern Cameroon has in recent years suffered from the overflow of violence linked to Nigeria’s Boko Haram Islamist insurgents.
Nigerian refugees have flooded across the border and local residents have been forced to flee their homes. Boko Haram launches frequent cross-border raids in a bid to carve out an Islamic caliphate.
Its eight-year insurgency has killed more than 15,000 and displaced two million people in the Lake Chad region. Villages and towns in the area have regularly been targeted by suicide bombers. A similar attack in Kolofata killed nine people in September 2015.
Thousands of troops have been deployed to the area in a bid to stem the violence.
-Reuters/NAN
Bloody Twin Suicide Bombing Kills Four People at IDP Camp was last modified: June 2nd, 2017 by Arinze Ago