BOLANLE AMBODE HANDS OVER TO WIFE OF GOVERNOR-ELECT 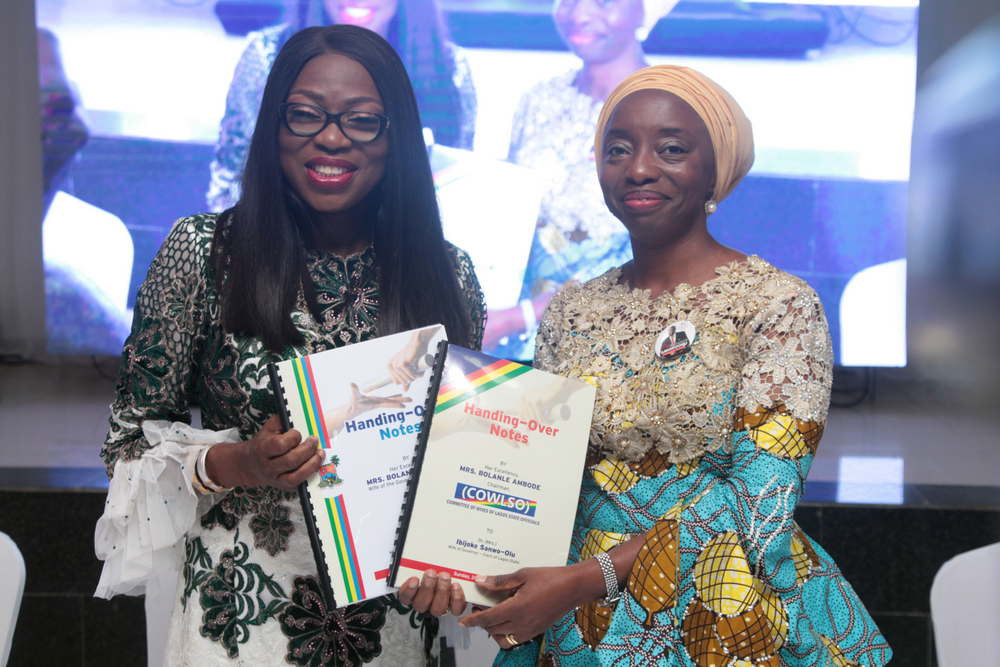 • Urges her to move COWLSO forward

At a brief handing-over ceremony in Lagos House, Alausa, Ikeja, Mrs. Ambode lauded the vision of the founding mothers of the committee, which is to compliment the efforts of the government, in critical areas that are women and children- friendly.

She reflected that the committee under successive chairmen, had continued to walk in that great vision, leading to remarkable improvement in the lives of women, girls and children, in vital areas of health, empowerment, education and others.

Speaking further, she recalled some of the achievements recorded under her chairmanship in the last four years: ‘My lovely women, with all sense of modesty, we happily recall some of our collective achievements in the health sector of the state, by way of interventions in maternal and child health, year after year.

The various phases of intervention led to the sponsorship of goiter surgery for 30 women, free hearing aids for 15 children, 3 women and 2 men; as well as the upgrading of the ENT Department of the General Hospital, Odan, Lagos. We also purchased and installed state-of-the-art audiology equipment, including Otoread OAE capable of detecting hearing defects in newborns’.

She copiously thanked members of the committee for their robust support for herself and the Ambode Administration over the past four years, while also appreciating her predecessors for their kind advice and words of wisdom.

Responding, Dr. (Mrs.) Ibijoke Sanwoolu, commended her for taking COWLSO to its current enviable height, promising that she would not deviate from the founding ideals of the committee.

She said, “I thank my big sister, Her Excellency, Mrs. Bolanle Ambode, for the great steps she has taken to move the committee to its current level. I thank her for the words of encouragement, that I should not be scared about the challenges of that Office. I will do my best, God helping me, to move COWLSO to the next level.’

Mrs. Sanwoolu who also praised Governor Ambode for his generous attention to the committee, noted that governance was a continuum, adding that the in-coming administration would work hard enough, to move the state to the next level.

A major highlight of the event, was the presentation of charity grants to 29 orphanage homes and those for the less privileged.

Folashade Kadiri (Mrs.)
Asst. Director Public Affairs
Office of the Wife of the Governor of Lagos State
Sunday, 26th May 2019

BOLANLE AMBODE HANDS OVER TO WIFE OF GOVERNOR-ELECT was last modified: May 26th, 2019 by Reporter