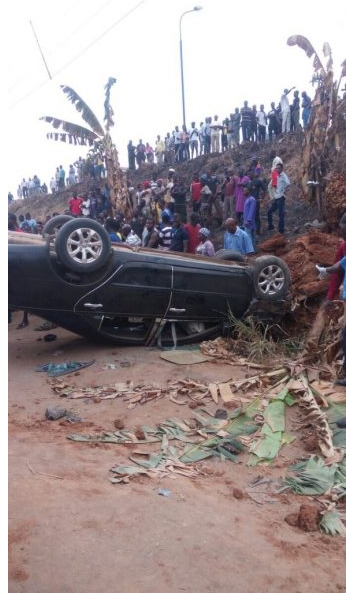 A young man in his late early 40s escaped death after his back wheel tire broke out on high speed along Gbagada Oshodi .

The Honda Accord car with registration number MUS 838 CU crossed over the culvet from the express to service lane close to Charly boy bus stop in Gbagada.

Although there was no life loss and further damages caused, the driver who had a minor cut on his head was quickly rescued by the good samaritans around and passers-by.

An eye witness who spoke with City People’s Damilare Salami having pleaded anonynity said being a mechanic, he has had several complaints from his clients who drive Honda vehicles having issues with their tires breaking out of the wheel.

The driver of the car couldn’t speak about what transpired because he needed medical attention to be sure there were no internal injuries.

READ ALSO: WHY THE BALOGUN & SERIKI OF EGBALAND ARE FRIENDS, DESPITE THEIR 20-YR AGE DIFFERENCE