Brigadier Samuel Ademulegun with his pregnant wife and children. 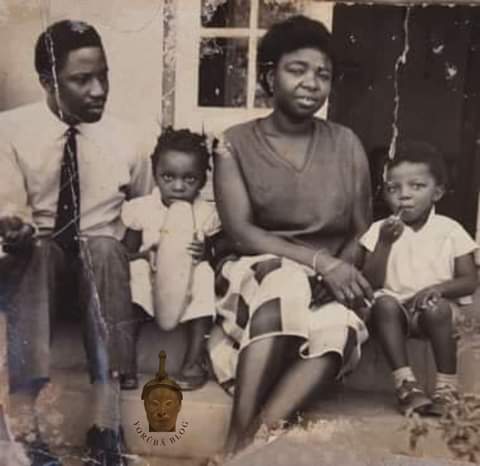 Ademulegun’s wife, Latifah, was eight (8) months pregnant when she and her husband were killed by Timothy Onwuatuegwu during the January 15, 1966, military coup.

Timothy Onwuategwu, an instructor at the Nigerian Military Training College, in the group of Chukwuma Nzeogwu and three other soldiers, pointed guns at Ademulegun who happened to be on just a singlet and boxers and his wife who happened to be eight months pregnant.

Ademulegun said– “Timothy how did you get in here”? This was actually the question he asked. He was caught off guard.

“Without calculating the risk involved; Ademulegun quickly dashed for his drawer to pull out the pistol and that was it, Timothy onwuategwu and Chukwuma Nzeogwu practically sprayed him and his 8 months pregnant wife with Bullets.”

Samuel Adesujo Ademulegun was born in Ondo town on October  23, 1923. He was classified as a first class soldier, he and other senior officers were vying to become the GOC upon the retirement of the expatriate GOC in 1965. He was considered to be a friendly and loving soldier but his close association with Sir Ahmadu Bello brought distaste to some junior officers who frowned at their commander fraternizing with a politician.

5 Ways To Make Your Man Stay In Love With You

How South-South Will Vote For ATIKU