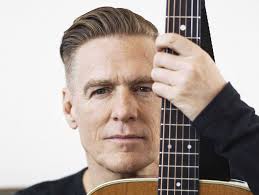 Bryan Adams last night addressed a long standing rumour he was once romantically involved with one Princess Diana. And he does it with class and just a hint of intrigue to keep us going. The legendary rockstar appeared on Watch What Happens Live with Andy Cohen overnight when he was straight out asked about the alleged romance by the ballsy host. ‘There are many rumors that you and Princess Diana were once romantically involved. Her butler said that he used to sneak you into Kensington Palace,’ Cohen said. ‘How would you characterise your relationship with Princess Diana?’

While many stars are asked whether they want to ‘plead the fifth’ – which is, in fact, the name of the game – and remain silent on the matter, Canadian singer Bryan, 58, was more than willing to speak about it. Adams replied: ‘Great friends. And she didn’t sneak me in, I would just roll up.’ Cohen hit back: ‘Friends with benefits?’ The Summer of 69 singer said: ‘Um, she was just… we were good friends.’ There were a few awkward sounds from the audience as he dodged that last question beautifully. If you think back to the singer’s 1985 tune, Diana, fans were adamant the song was about the Princess of Wales. Especially seeing as she was referred to as the ‘queen of all my dreams’, as Bryan implied her not-named husband wasn’t good enough and she should leave him for her. The song was however retired from his touring set in 1997, following the passing of Princess Diana in Paris. Keeping on the track of Princess Di’s good friends, Bryan also revealed on the show he once sent a ‘dick pic’ to Elton John.

Bryan Adams denies he was anything but ‘good friends’ with Princess Diana was last modified: June 27th, 2018 by Igbokwe John