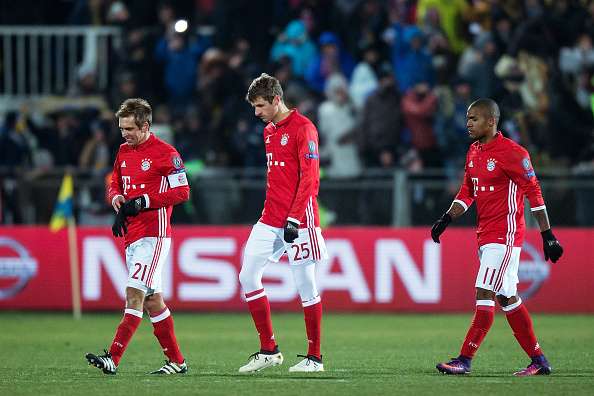 Bundesliga likely champions, Bayern Munich will be without central defenders Jerome Boateng and Javi Martinez, both nursing minor injuries when they face Mainz 05 on Saturday but Mats Hummels is fit to play, coach Carlo Ancelotti said on Friday.

Hummels and Boateng both played with injuries in their extra time Champions League defeat at Real Madrid on Tuesday.

“Hummels is fine, he trained without problems,” Ancelotti told reporters.

“But I left Boateng and Martinez out. They still have minor problems and must be fit against Dortmund.”

Bayern are eight points clear at the top of the table with five games left and are cruising towards a record-extending fifth consecutive Bundesliga title.

The Bavarians also face Borussia Dortmund in the German Cup semi-final next week but their treble chances were dashed in Madrid when they lost their quarter-final 4-2 after extra time (6-3 on aggregate).

“Unfortunately we are out of the Champions League. Now we want to win the league as quickly as possible,” Ancelotti said.

“The focus now is on the Bundesliga and the Cup.”

Bayern will also be without keeper Manuel Neuer against Mainz. He has been ruled out for the rest of the season with a broken foot.

“You cannot change that. It is a pity for Manuel and I hope he recovers quickly,” Ancelotti said.

“But (Sven) Ulreich is ready and he has shown how good he is.”

Tekno Reminds Us He Is A Hopeless Romantic On ‘BE’