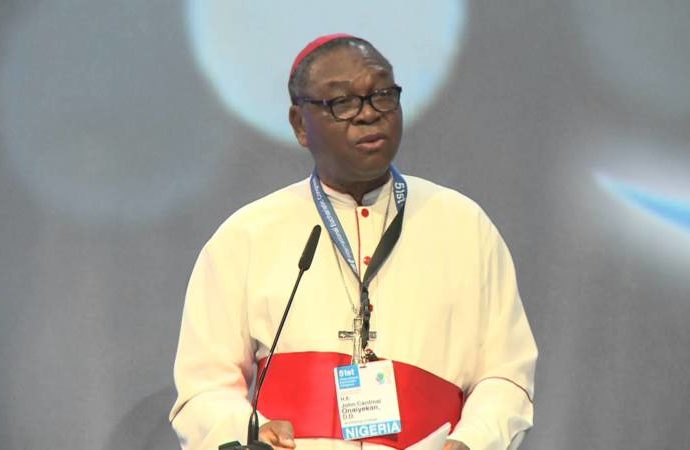 John Cardinal Onaiyekan, Archbishop of Catholic Archdiocese, has expressed the resolve of the diocese to support serious priests that want to go into music to achieve their dream.

Onaiyekan said this in an interview with NAN on the sideline of the launching of the maiden gospel music album by Rev. Fr Oluoma John.

The album is entitled “In His Presence’’.

“When money is involved, they must be accountable,’’ he said.

In his remarks at the occasion, the Auxiliary Bishop Catholic Archdiocese of Abuja, Dr Anselm Umoren, commended Fr. John for the music.

According to him, the launch is geared toward making more launching for young ones in the future.

Umoren said that the major lesson derivable from the launch was that the talent was not restricted to the host artist.

“The Cardinal and myself are behind him not specifically for him, but because of his action and what he is trying to do will benefit a lot more young people in the years to come,’’ he said.

Also speaking, Rev. Fr Robert Achiaga, who gave the citation of the Host Artist and the Album, appreciated God for using Fr. John to contribute to indigenous gospel in the country.

Achiaga said that foreign gospel artists and songs were dominance in the country in the 1960s.

“The translation from the dominance of foreign gospel artists and songs in Nigeria by a complete take over by indigenous gospel music was not without a concern for people like Fr.John.

“For instance, he has often wondered what is the quality of lyric of these gospel songs, the concern of the theological quality of the songs that dominate gospel music in Nigeria?

“The relevance of the song to the Christian life and songs, the place of the Catholic Church in the story of the growth of gospel music in Nigeria,’’ he said.

The Priest said that the host artist had always wished for catholic liturgical songs to have a wider, interfaith and trans-liturgical appreciation and use.

According to him, Fr John is aware of the enormous potential of music as a tool for evangelisation.

“He has always felt that the Catholic Church in Nigeria has not fully optimised this tool.

“With this album, therefore, he aims to use music to create a platform for evangelisation, especially to reach out to the youth.

“He hopes to also help those with talent in music to have access to production facilities.

“This is why he has dedicated that the proceeds from this album launch will be used for the building of a state of the art digi-analogue studio for the Catholic Archdiocese of Abuja,” he said.

Mr Kennedy Okwudili, the Chairman of the Organising Committee of the launch, said the studio was estimated to cost N130 million.

Okwudili said the studio would provide a platform for talented youths, upcoming artists and multimedia professionals to showcase and maximise their God endowed potentials for the benefit of the larger society.

“Presently, many of our youths who have the flair for music and want to begin their music career do not have the opportunity to showcase their talents due to very few and affordable studios,’’ he said.

NAN reports that the event also featured performance by some gospel artists and comedians such as Kelvin SAP, Chris Morgan, Sam and Song, Onome Da Saint, Ghana Must Go and Jude Nmam.

The host artist (Fr John), also a writer is Parish a Priest of the Christ the King Church; Kubwa commended the Cardinal, the Axillary Bishop and the Archdiocese for their support.

John, who presented two tracks from the six tracks album, also appreciated the contributions of invited guests, parishioners and organisers for the success of the launch and fundraising.