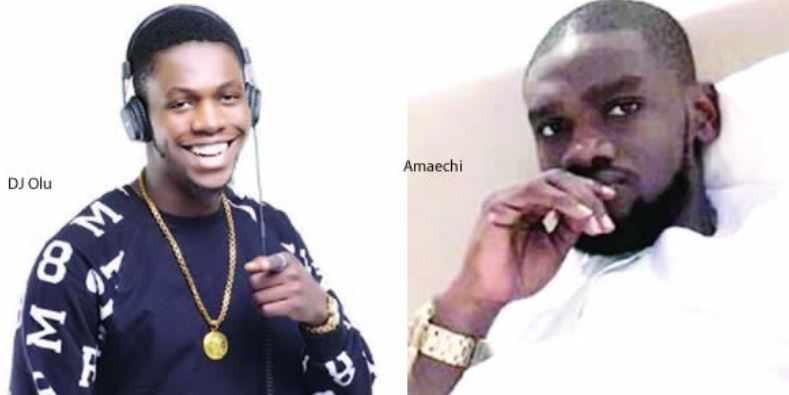 As mysetries behind the tragic and shocking deaths of Olugbenga Abiodun a.k.a DJ Olu, the son of billionaire businessman, Dapo Abiodun, and his friend Chime Amaechi, have continued with the latest revelation from an exclusive video clip released online.
Recall that DJ Olu and Chime were found dead in a BMW car in a garage on Block B, Banana Island, Lagos. It was also learnt that blood was coming out of their noses and mouths.
The Lagos State Police Command have also revealed that it recovered substances suspected to be hard drugs in the car the bodies of the young men were found in. but those who know the young men, insist that they were social drinkers, but weren’t into hard drugs.
According to the Lagos State Acting Commissioner of Police, Edgar Imohimi, “there was no mark of violence on the bodies of the deceased”, however, “autopsies would be carried out to know the cause of death” and the substances found in the car would “be analysed.” Just as new reports indicate that Davido has been invited back to throw more light on the death of Tagbo, Olisa Blogazine has exclusively published some videos purportedly taken by DJ Olu and Chime on their last night on earth.
It was gathered that the video, which showed them laughing and having fun, with no inkling that death was hovering, were recorded on their phones, and an intriguing part of the video showed boxes of money in the boot of their car.
As the video taken on the same day the young men died which emerged online and is currently making the rounds on social media, many online commenters are asking the question of what happened to the money? whether Is it tied to their death?
There is also the fact that the Nigerian police didn’t list boxes of money among the items found in the car with the young men. Hence the question: What really happened?
See video below:
Cartons of Naira Notes: Video of DJ Olu & Chime’s Last Night on Earth Raises Questions Over Their Deaths was last modified: October 12th, 2017 by Arinze Ago

Tony Pulis Voices Out Concerns Ahead Of Clash With Leicester City