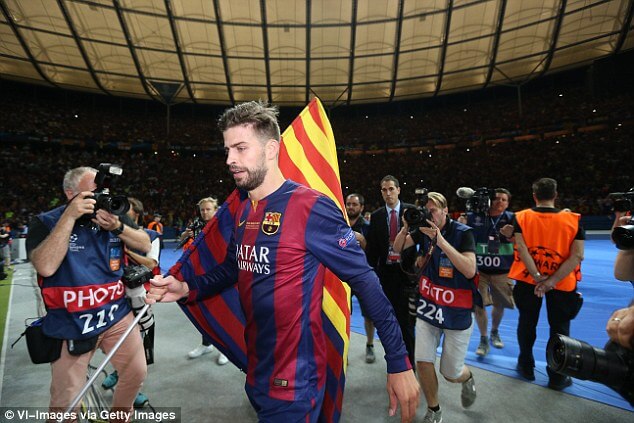 It should have been a celebration of Spain qualifying for next summer’s World Cup but instead Julen Lopetegui takes his team into their penultimate match in Group G trying his best to weather a political storm.
If Spain get a better result against Albania than Italy manage against Macedonia then they will have qualified automatically for Russia 2018.
And if they win the game, but Italy win theirs too, then they will need just a point away in Israel on Monday to secure qualification.
But instead of anticipating a carnival atmosphere at the Rico Perez stadium in Alicante, Lopetegui is just hoping supporters do not jeer his defender Gerard Pique who was verbally abused at Spain’s first training session of the week in Madrid on Monday.
Pique publicly backed the referendum in Catalonia that took place on Sunday despite being declared illegal by the Spanish government who sent national police and the Civil Guard into the region to prevent people accessing polling stations.
Pique was pictured voting in the referendum shortly after addressing reporters following Barcelona’s behind-closed-doors 3-0 win over Las Palmas at the weekend.
In the interview he admitted he would step aside from the Spain squad if his open political stance was deemed a problem by his bosses.
Lopetegui has so far backed Pique. He said in an interview with Spanish radio on Monday: “His commitment to the team has always been extraordinary. We do not analyse political opinion.
“He is selectable because he wanted to come here with us. He has always behaved well and all the time that is the case we will not look any further.”
Spain’s second most prominent Catalan midfielder Sergio Busquets was slightly contradictory when he spoke to Spanish radio station Cope on Tuesday.
He said: “This is my most difficult moment with the Spain team because of everything that is happening. I think it will be difficult to find a solution to the Pique situation.”
But he also added: “There has been no special summit between the players. I don’t know if Pique and Sergio Ramos have spoken. The atmosphere within the squad is exceptional.”
Pique and Ramos’ defensive partnership is the rock on which the team’s success has been built. They won the World Cup together in 2010 and then the European Championship in 2012.
But Ramos is a staunch Spanish patriot and has not always seen eye-to-eye with Pique even before he became such an outspoken advocate for the illegal referendum on Catalan independence.
Pique and Ramos will be even more important than usual against Albania on Friday precisely because Busquets will not be available to play in front of them in holding midfield. The Barcelona player is suspended for the game.
Lopetegui will also be without striker Alvaro Morata, midfielder Andres Iniesta and right-back Dani Carvajal for the match.
None of that ought to stop Spain winning their final home game of the group matches but Lopetegui will be hoping not just for the right response from his players on the pitch but also from the spectators.
He took to social media this week to appeal to them to back the team. He tweeted: “Concentrating on the important game against Albania. We need the support of the great fans in Alicante for this important step towards the World Cup.”
-DPA
Catalonia Independence: All Eyes on Pique as Spain Play Last Home Game was last modified: October 4th, 2017 by Arinze Ago