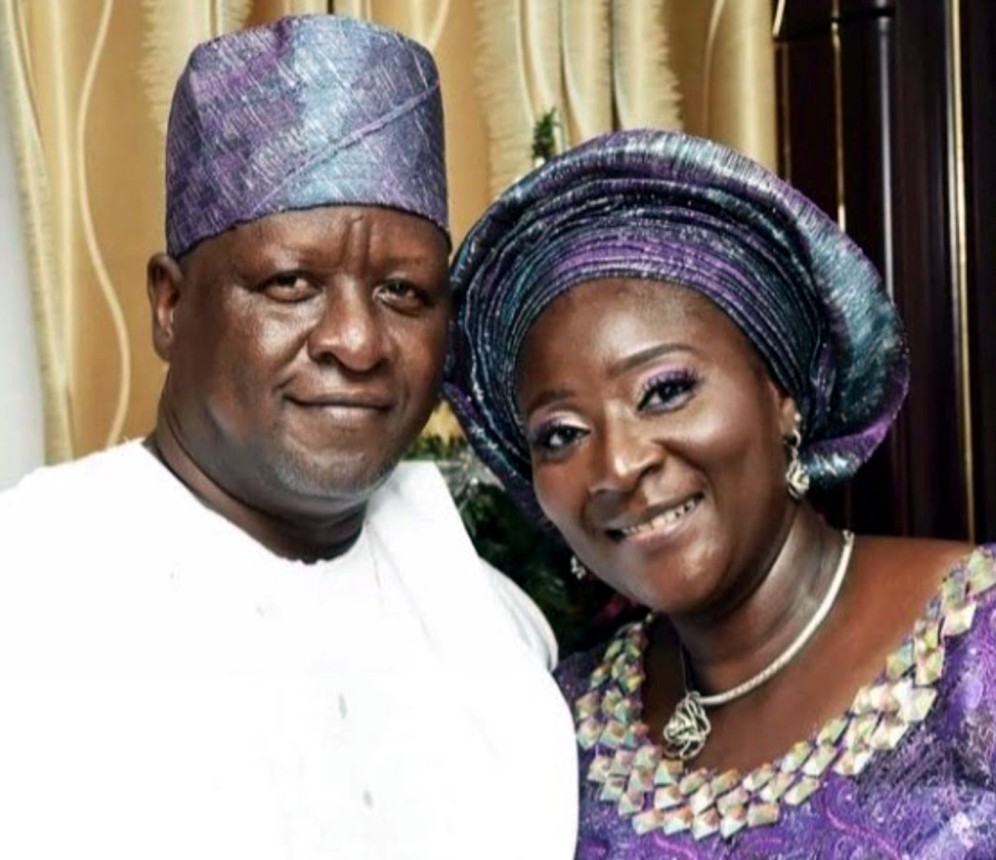 It is no longer news that former Lagos Information Commissioner, Hon. Kehinde Bamigbetan lost his wife on 21st November 2021. She was buried last week. The service of songs took place in Lagos. It was conducted by The KCCG, Eternal Joy Parish & CAN, Ejigbo LCDA, Lagos.

Below, City People reveals the story of the late Mrs. Fatimah Amele Erepita Grace Bamigbetan. We can authoritatively tell you a lot about this woman of virtue.

On Saturday, May 19, 1973, Mrs. Rekiah Francis gave birth to a beautiful baby at the Lagos Island Maternity. As it is the custom among his Ewe tribe of Vo Topli, Togo to name a girl-child born on Saturday, the father, Nsua Kofi Francis named her Amele. Mrs. Francis, a native of Warakeh in Owan land was, at that time, a Muslim. She gave her the name of one of the four perfect women in the Quran, Nana Fatimah, after the daughter of the Holy Prophet.

She also named her Erepita, meaning “a testimony of good news.” Her birth was registered on June 8th, 1973 by Murano Olayiwola Busari, the Registrar of Births at Ebute-Metta, Lagos as Number 13247.

In 1980, Fatimah was enrolled at the Surulere Baptist Primary School, Surulere, Lagos State. She finished primary school in 1986 and was admitted to the New Era Girls Secondary School, Surulere, Lagos State with admission number 3253. Her major subjects were English Language, Yoruba, Literature in English, Christian Religious Knowledge, Government, Economics, Commerce, Mathematics and Biology. But she loved English Language and Literature in English, one reason she was very active in the Drama Society.

Assessing her in the Testimonial, the principal, G.U. Egungwu described her conduct as “satisfactory” and her personality as “reliable and Quiet”.

She graduated in June, 1992 and took up clerical jobs at companies such as Lovely Lots and Lilybell Advertising while seeking admission to higher institutions. In 1994, she gained admission to the Obafemi Awolowo University to pursue a Diploma Programme in Physical Education. On completion of the programme in 1996, she took the Joint Matriculation Examinations and was admitted by the Obafemi Awolowo University to study English & Literary Studies. In 2001, she graduated with a Bachelors of Arts in English. On Boxing Day, December 26,1998, she married Kehinde Oladapo Bamigbetan, her friend and mentor of several years.

The wedding, which took place at the Marriage Registry, Surulere Local Government, Lagos was blessed with a girl, Omokorede in 2000. This meant that she successfully combined mothering with studies till she graduated a year later.

After graduation, she was called to participate in the mandatory National Youth Service Corps, serving at the Human Resources Department of the Federal Airports Authority of Nigeria, FAAN between 2002 and 2003. Following her discharge from the service, she devoted herself to full time home management and mothering.

Olumide was born in 2003 and Bamikole in 2005. The total commitment to nurturing the children has shaped them to be well- behaved, humble and responsible children. The children began their pre-primary school at the Marble Children School owned by her sister-in-law, Mrs Ireti Bamigbetan of blessed memory and moved to. Ronik Primary School, Ejigbo. For their secondary education, Omokorede attended Chrisland College, Idimu, Lagos State; Olumide, Olashore International School, Iloko, Osun State while Bamikole did his Junior Secondary School at Kings College and his Senior Secondary School at Chrisland College, Idimu.

Also, following the establishment of Echonews Newspapers in 2004, Fatty began writing a weekly column, Aunty Fatty, providing advice to young girls on career and relationships. The alias, Fatty, became popular. With the reduction of the pressure of kindergarten years and the admission of the kids to secondary boarding schools, Fatimah went into business with the incorporation of Fatamel Ventures, an enterprise that sold frozen poultry and fish products and was active in all aspects of rentals business, in 2007. Fatty Party Rentals, the flagship of the units and a recipient of the Lagos State Employment Trust Fund’s Small and Medium Enterprises support scheme is a testimony to her doggedness and business skills.

Besides, COWLSO, she was also a member of National Council of Women Societies (NCWS), Nigeria Girls Guild Association (NGGA) and association of her secondary and university alumni.

During her period as wife of the Chairman, Ejigbo LCDA for six years, ( 2008-14), Fatty was appointed the Lagos State Ministry of Health Ambassador for Prevention of Mother – To – Child Transmission (PMTCT) of HIV and Family Planning.

Fatimah took the Christian name, grace on her decision to become born-again and displayed exemplary commitment to the service of God in the Redeemed Christian Church of God, (RCCG) Eternal Joy Parish, Ejigbo, Lagos. She was the Women Leader of the parish until God called her home. In appreciation of her religious work, the Catholic Women Organization gave her the award of excellence as the Lady of Honour. She would be remembered as an advocate of keeping fit and healthy living. Fatty approached her resolve to stay healthy by keeping fit with characteristic doggedness. Every morning, she drove to the gym to join others for exercise. Even when on vacation anywhere in the world, she never missed her routine.

One huge loss to the family would be Fatty’s humour and infectious happiness with which she boomed the home with peals of laughter. She loved to tease and surprise.

Her love for the Latin American soaps, Law of the Heart, False Identity, Loli’s Luck, Queen of the South, Woman of Steel, The Way to Paradise, Betty in New York was exceptional. Also of interest to her were the Indian soaps, The Heir and Double Kara on Televista.

READ ALSO: UNVEILING 20 IGBO ACTRESSES WHO HIT IT BIG IN 2021

Unveiling 20 Igbo Actresses Who Hit It Big In 2021

I Have Been Rocking The LAGOS Social...