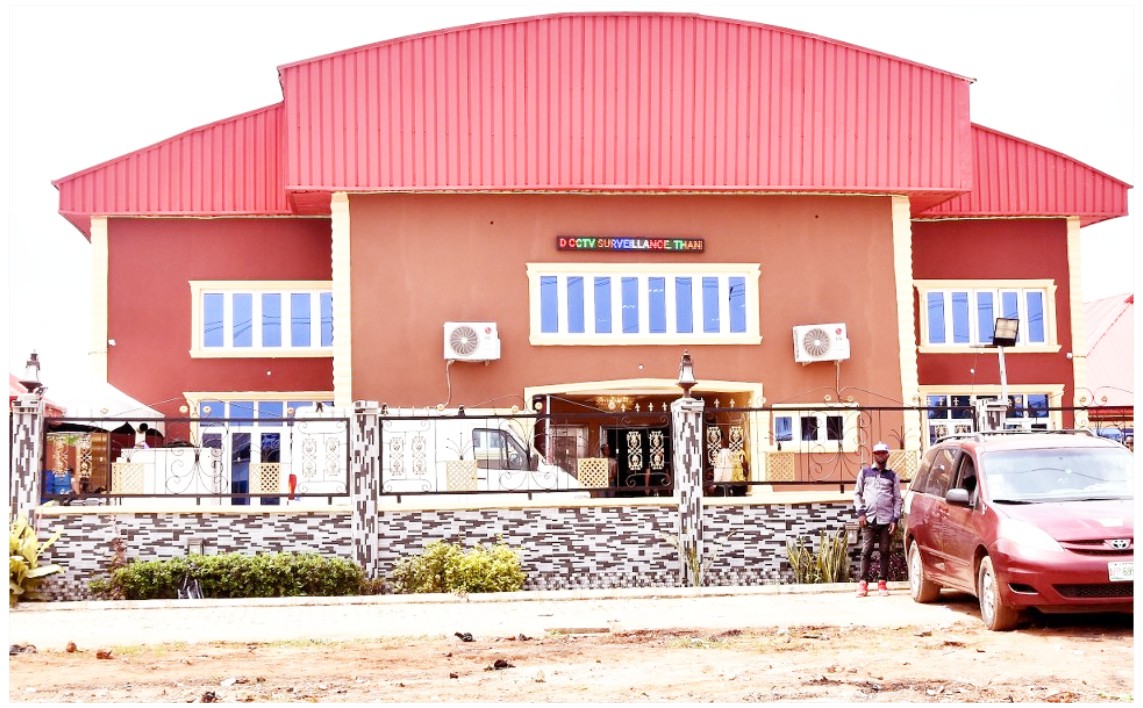 Saturday 6th August 2022 would remain a day to remember. It was the day Royal Palace Events Centre was declared open for business. The official opening of the event centre was anchored by HRH Alaiyeluwa, Oba Abdul Wasiu Adewale Sobowale, the Olowu of Odolowu and a huge number of Islamic clerics who came to commission the place with prayers

The classic edifice located in the heart of Ikorodu has the capacity of accommodating 1,000 guests at a go. Indeed, it is a site to behold as it provides the most sublime setting for occasions and ceremonies with full exclusive use of the property and grounds.

Many eminent socialites stormed the grand opening of the event centre to celebrate with Alhaja Ajoke. City People was at the event to bring you blow-by-blow gist

Give it to the celebrant, Alhaja Musilimat. She actually stole the show at her own event. She is your regular Style dictator any day,  anytime. Her fashion sense can’t be underestimated. For her event opening, she changed 2 times. What else do you expect from the Doyen of fashion? She wore an expensive all-white dress for the morning prayers. Then a few minutes into the reception, she changed into a wine velvet dress mixed with Chantilly pink lace which made her look beautiful for her day.

It was an occasion where powerful celebrity women all came together to celebrate with her. Alhaja Muslimat has always been the darling of parties, and at her party, she performed her role well. She sat at the VVIP table and constantly went to sit with her friends at other tables. She looked so pretty and young at heart, in all her looks.

The very homely, free-minded and humility personified woman of class, who has friends from all age ranges, both young and old, were all represented at the party. Alhaja, has definitely come in contact with some people in her life who are more than friends and her sojourn in the social world has also brought forth many friends who have become like family to her, hence the massive turnout of dignitaries at the party which shook the whole of Ikorodu.

If you are not on the invited guest list, you had no business at the venue because security was watertight. Clearly and boldly written on the invitation letter was that Access Card is the prerequisite for entry. Many guests who stormed the event opening were those invited for the superlative birthday and this prevented all gate crashers from entering.

Popular and veteran Nollywood actors and event comperes Bolaji Amusan a.k.a Mr Latin,  Yomi King, a.k.a Opebe, and Pariolodo were the anchors of the event opening ceremony. You should know the depth of entertainment that will be obtainable where these three actors share one stage. There was no dull moment from the start to finish. As they throw banters at one another, they also displayed episodes of drama to keep the guest entertained.

K1 DE ULTIMATE AT HIS BEST

Give it to King Wasiu Ayinde Marshal, Maiyegun of Yorubaland, the Oluaye of Fuji himself. His performance was scintillating. Apart from the fact that K1, who is celebrating his 50th anniversary on stage stood all through his performance, nothing has changed in terms of his vocal delivery and overall performance of the band. His voice was still strong and melodious, just as it was in his younger days. Dressed in a simple coloured native with gold plaited black suede pair of shoes, K1 looked so elegant on stage.

Alhaja Ajoke Muslimat Adeshina indeed has musical talent. She displayed that part of her at the event as she takes the time to express her joy in singing. At every point when the Muslim clerics try to refer to her or inquire about her testimony, she dives straight into the music mode, and we must admit that she’s got a sonorous voice. We believe Alhaja would do well also in the music industry. Her eloquence in the Quran citation was also superb. She is beautiful and also religious to the core.

The husband of the celebrant, Akesa Baale Oja himself who spoke to City People stated that the event centre is just the tip of the iceberg of what is yet to come. He said there are other big projects that are in the offing for the unveiling and he prayed that God will grant his wife long life and perfect health to conclude all the projects.

He also shared the story of how they met abroad and how he vowed to marry her. He reiterated that Alhaja Ajoke is the best thing that has ever happened to him and vowed to support her in all she does.

The congratulatory message to the celebrant aptly captures the sentiments that flowed from the testimonies given by family members, friends and colleagues in acknowledgement of her impact through her benevolent gestures.

One of her friends, Alhaja Malikis Motunrayo, also congratulated Alhaja Ajoke for the huge success of the event opening. She described the celebrant as her sister and confidant.

“We have been together from Ireland to London and back in Nigeria. “We thank God for what he has done in her life, and this will be the beginning”. She also describes her as a kind-hearted soul who believes in God and relates well with people.

And then a toast to the celebrant followed by picture sessions. Thrilled and overwhelmed, Alhaja Ajoke Muslimat Adeshina was left speechless when asked to say a few words to the gathering. At the end, it was a time well shared together celebrating a woman who has distinguished herself over the years

There were several professional hands involved in the packaging of the extremely successful event. The classy event was packaged by the dynamic and highly experienced outfit.  The planning committee members gave everything to make sure the event was nothing short of the grand spectacle that it was.

Modupeoluwa catering handled the drinks department, they also did a great job. TM Kitchen was in charge of some of the delicious meals served at the party. AY Asun offered delicious grilled goat meat. Master Kay chops, Five Fingers Foods and Reloaded BBQ did not also disappoint as they served small chops, seafood and barbeque respectively.

How Agriculture Can Grow the economy – Engr. Omotunde Olaleye