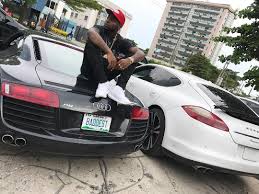 Here are five celebrities with some expensive cars in their garages.

Over the years we’ve seen celebrities acquire these expensive toys and in some cases, they flaunt them on social media. We’ve got a number of celebrities who have so much taste and drive some really expensive cars.

Here are five celebrities with some expensive cars in their garage.

It is not clear how many cars Peter Okoye (Psquare) has, but we know he is another celebrity who is a freak for cars. Since becoming a star, Peter has owned a number of really expensive cars but in recent times, we’ve seen some cars in his garage that definitely cost a fortune.

Among the latest cars in his garage include a Mercedes Benz G-Wagon which goes for $120,000 and $140,000 for the AMG which is about N43M. Also among his fleet of cars is a Wrangler Jeep and Toyota Land Cruiser which all cost a fortune.

Just like his twin brother, Paul Okoye has a thing for expensive automobiles as he has a number of them in his garage. Even though we don’t know how many cars Paul Okoye has, we can’t get our minds off his 2016 Range Rover Autobiography which cost about $199,495 which in naira is about N71M! That’s to tell you how freaked this music star is about cars.

Another cute car that can be seen in his garage is the Jeep Wrangler Rubicon which also doesn’t come cheap. Looks like it is Paul favourite ride as he is always seen posting photos of the jeep on his Instagram page. Then there is a 2005 Chrysler crossfire which might be one of his early buys and goes for $29,000 and in naira is about N10M.

Phyno isn’t one of those celebrities who won’t necessarily make this list not because he doesn’t have expensive cars but because he has always been a private person. Well, he makes this list because a few months ago, he broke the Internet when he shared a photo of his new car. In his garage, he recently acquired a Royce Rolls Phantom VII which goes for about 406,000 pounds which in naira is about N204M!

Another celebrity whose love for expensive and sleek cars can’t go unnoticed is the rapper, Zoro. Just recently, the rapper took to his Instagram page to share a photo of his newly acquired car. This would be the first time we would be seeing any of Zoro’s cars because up until the instagram post we hadnt seen any of his cars.

This is one celebrity whose love for expensive cars knows no bounds. If it is good looking and cost a lot, Davido is definitely going to buy it. A close look at his garage indicates that apart from having expensive cars, he kind of likes all his cars to be white in colour. He just recently acquired a 2018 Bentley Bentayga worth N94m.

playDavido and some of his exotic car

Before that, Davido already had some other really expensive cars like the Range Rover Autobiography and a Mercedes Benz GLE 450 which goes for about $65,100 and its equivalent in naira is about N23M.

Check out 5 celebrities with expensive cars was last modified: May 24th, 2018 by Igbokwe John