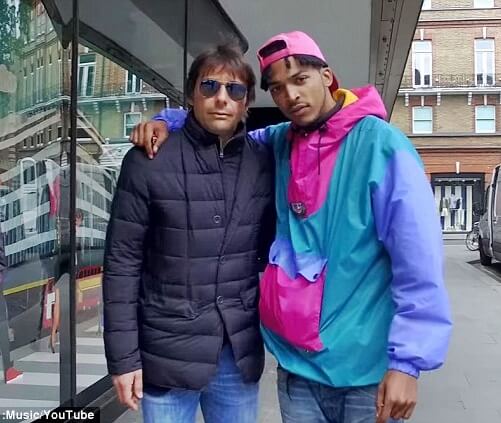 Antonio Conte may have just won the Premier League title with Chelsea but his life could have played out very differently if his latest antics are anything to go by.

Chelses FC coach, Antonio Conte, who recently won the Premier League title in his first season in England, appears to also be a huge fan of the grime music scene after starring in a video with emerging British MC Eyez.
According to Dailymail, the grime artist teamed up with producer, Maniac to create the tune ‘Smoking Fine’ but one thing that stands out from the track is the appearance of the Chelsea manager. In the video, Eyez is seen walking around West London doing what he does best but when the time hits 1 minute and 43 seconds, the unexpected occurs.
Conte appears in the video, albeit very briefly, standing motionless next to Eyez, wearing a thick coat, sunglasses and a blank expression.
Who knows how Conte managed to get himself a one second role in the video but maybe the Blues boss is hoping for a career within the grime industry when his time as manager comes to an end. It can’t be denied how good his cameo is but it could have been even better if the Premier League title winning boss elected to spit some bars.
Despite dipping his toe into the music scene, Conte will turn his attentions to football again as he looks to bolster his Chelsea squad in the summer transfer window ahead of Champions League football next season.
Watch the video clip below;
Chelsea Boss, Conte on Set of a New Music Video with British Artist, Eyez Following EPL Win (Photos/Video) was last modified: June 1st, 2017 by Arinze Ago