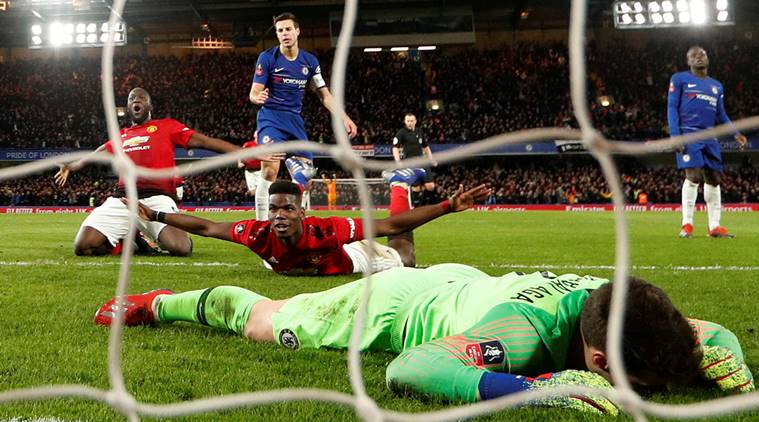 The result throws Sarri’s reign deeper into crisis, while United delivered the perfect response to their first defeat under Ole Gunnar Solskjaer to set up a last-eight tie against Wolves.

Ander Herrera converted Paul Pogba’s perfect cross to give United a 31st-minute lead, and Pogba doubled the advantage right on half-time when he dived to head Marcus Rashford’s delivery past Kepa Arrizabalaga, who should have done better.

As Chelsea slumped tamely to another damaging defeat, their fans turned on Sarri. They jeered his substitutions, mocked his ‘Sarri-ball’ philosophy, demanded the return of Frank Lampard as manager, and joined United’s fans in chants of “you’re getting sacked in the morning”.

“We played confused football in the second half but in the first half we played well,” said Sarri.

“I’m worried about the result but not about the fans’ reaction because I understand the situation. I can understand our fans because the result wasn’t really good and we are out of the FA Cup.

“I was really worried when I was in League Two in Italy, not now.”

Solskjaer had no such problems as he took the loud acclaim of United’s supporters after adding another impressive victory to his collection, despite the absence of the injured Jesse Lingard and Anthony Martial.

The club’s fans, who loudly sang the Norwegian’s name, may not have the casting vote when the decision on the next manager is made, but they made their feelings about Solskjaer clear on another important night for the man who hopes to succeed Jose Mourinho on a permanent basis.

READ ALSO: MANCHESTER UNITED FLEXIBILITY WILL GIVE THEM VICTORY OVER CHELSEA – DARREN FLETCHER