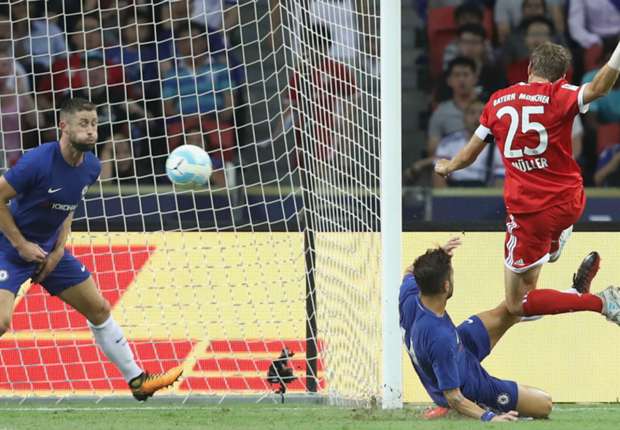 Chelsea have recorded their first pre-season defeat after Thomas Muller’s brace ensured that Bayern Munich put a brilliant performance in a 3-2 victory in Singapore.
Carlo Ancelotti tutored men lost on penalties to Arsenal and then 4-0 to AC Milan in their previous International Champions Cup fixtures, and concerns had begun to surface about their ability to cope with the retirement of influential stars Philipp Lahm and Xabi Alonso at the end of last season.

Brazilian full-back Rafinha soothed those worries by scoring an opening goal that had all the hallmarks of Lahm’s attacking game, before Muller scored with two fine strikes as the Premier League champions were overrun by their Bundesliga counterparts.

Marcos Alonso pulled one back for the Blues shortly before half-time, and Antonio Conte introduced star signing Alvaro Morata for his first pre-season appearance in the second half.
Morata had a hand in Michy Batshuayi’s late consolation goal in a second half that saw Bayern continue to create the better of the chances, many of which fell to the Spain striker’s former Real Madrid team-mate James Rodriguez, who endured a frustrating evening.
Bayern, keen to make amends for a disappointing performance in their drubbing by Milan, started the game brightly with veteran winger Franck Ribery probing forward down the left flank.
It was a cross-field pass from Ribery that allowed Rafinha to break down the right and hit a low, bouncing shot across the face of goal that found the net via Thibaut Courtois‘ right-hand post.
Ribery was again the architect when Bayern made it 2-0 after 11 minutes, skipping into the box and cutting the ball back into the path of the onrushing Muller, who volleyed home from close range.
Muller scored the pick of the goals after 26 minutes after he was put through by Corentin Tolisso and then allowed to run at Chelsea’s defenders, who backed away while the Germany international curled a powerful 25-yard shot beyond Courtois and into the top-right corner.