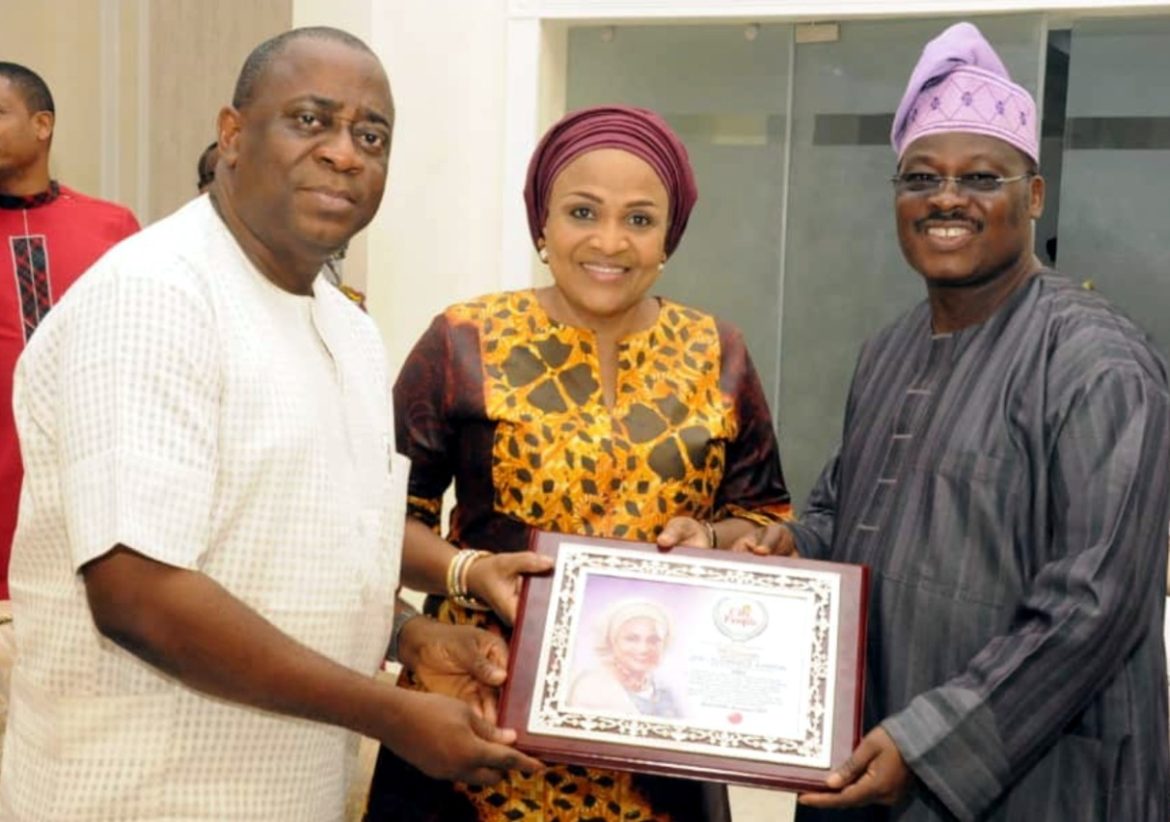 •With The City People Service-To-Humanity Award

•Says “I Am Determined To Do More For Society”

Chief (Mrs.) Dr Florence Ajimobi, the Oyo State First Lady, has restated her commitment to do more for Women, Children and the society at large in Oyo State, even against all odds. She made this known while receiving City People Service-To-Humanity Award last week Tuesday, 20th November 2018.

Why did the leading celebrity journal in Nigeria today, City People Magazine honoured the beautiful wife of the Oyo State governor, Mrs. Florence Ajimobi with the Service-To-Humanity award? City People Publisher Seye Kehinde explained it at the event.  This award, according to the Publisher of the magazine, was as a result of Mrs. Ajimobi’s immense contributions to the development, of her immediate environment through her pet project and all the different initiatives she has embarked on over the last 7 years. The award presentation took place inside the beautiful Oyo State Government House, at Agodi in Ibadan, as Mrs. Florence Ajimobi and her  husband, His Excellency Senator Abiola Ajimobi played host to the City People team led by the Publisher, Dr. Seye Kehinde and made up of Assisatnt Editor Sunday Adigun; City People Ibadan Correspondent, Dare Adeniran and photo journalist, Wale Osanyintola.

While presenting the award, the City People Publisher, described Mrs. Florence Ajimmobi as a woman with a larger heart; somebody whose interest in Human Capital Development is commendable.”There is no doubt in the fact that you have been a good ambassador of women and hope of the less-privileged and voice of the voiceless in your immediate environment. We have also witnessed what you have been able to achieve in the last seven years, through your differient initiatives and we felt it would be good of us to appreciate and encourage you in our own little way, to say Thank you for the wonderful job you have been doing in these past years. That is why we have decided to honour you this evening  with this special award of Service-To-Humanity,’’ he noted.

In her acceptance speech after the presentation of the award plaque, Mrs. Ajimobi said she was so elated to have been honoured by City People. She said it is quite encouraging to know that somebody somewhere is able to recognise what you have been doing and deemed it fit for you to be appreciated. In her words, ‘’let me first of all say Thank you, on behalf of the Women of Oyo State to whom I am going to dedicate this award because without them I don’t think I can achieve what I have been able to achieve in the last 7 years. I want to say thank you to City People for honouring me and for recognizing my efforts in giving back to society. It always gladdens my heart when you are appreciated. In the midst of a political era, different activities will happen. You will find people appreciating you. You will also find people condemning you. But once in a while when you get people to appreciate you, it makes you happy. For me, this is to challenge you to forge on. It is on this note I want to sincerely, from the depth of my heart, appreciate this award. I must confess that I have always been a friend of City People right from the days of my little sister, Bola Davies of blessed memory. She was a good ambassador of City People. City People Magazine is the only celebrity magazine that I read. Why do I read it? I do because it has interesting stories. When you look at what is going on in the social media today, you will find out that there is a lot of mix up, misconception, misinformation being dished out  to the people. But I must say with all sense of sincerity that City People is one of the celebrity magazines and social media platforms that give people the right information, accurate information without malice. And I will say that even when sometimes you do make mistakes you are always quick to correct it, because I know you made a mistake in the past with my family, you took it upon yourself to apologise. We didn’t argue about it. There are so many magazines or social media platforms that have made mistakes and I had taken them to court. We didn’t have to get to that stage. We all make mistakes in life and going by the nature of your job, you get information from people. Sometimes your reporters don’t find out the truth about whatever information they have been given. But I commend you that when that happened you were quick to correct your mistake. So, that is one of the things that endeared you to my heart and I will always be a friend of City People,’’Mrs. Ajimobi explained.

Moving forward in her speech, the First Lady of the pacesetter state also used the opportunity to call on other media practitioners, especially those who run the social media platforms to be of good ambassadors of the Journalism profession, by always verifying whatever information they have at their disposal. ‘’I want to use this opportunity to appeal to the media people out there, especially the social media, that we should stop being malicious. We should try and give the right information to the people. We can’t do without you because you are the source of information to the people. But in the course of giving information to people I just want to implore you that you should make sure, even when the information comes to you, when a story comes to you, take a few minutes to find out the truth of that story, the authenticity of the story. Because a lot of stories, by the time they get out there, a lot of damage must have been done. I could remember an incident that happened to me 4 years ago when it was all over the social media that Florence Ajimobi had been arrested by the Metropolitan Police in London. Meanwhile I was in my house. I was sitting down watching T.V and I looked at myself and asked myself:‘’but is this not me now?’. How many people do I want to go to and tell that the story is not true? How many people do I want to go to debunk that story. The harm had been done.”

“So, please appeal to your fellow media men, people in the social media, they should try and make sure that whatever story they are dishing out have truth in them. And when we are reading we will have confidence in them. Because of the lies online, I don’t even go on facebook again, because half of the time, there are so much lies in the stories. You even find individuals opening pages on behalf of other people without any truth in it.

But City People has been able to stand out amongst others. So therefore, I dedicate this award to all the women in Oyo State, my mothers, my sisters, my friends, my children, the youths, the aged, the widows, because without them there will be no Florence Ajimobi. I am happy that in my own little way, I have been able to give back to society and my prayer is that I will be able to do more. ‘’With this recognition, I know I will do more. I am determined to do more. It is very good for me because you know that at least out there; there are people that appreciate you. Even if out of 10 million people just 5 hundred appreciate you, its ok. What does that do? It gives you the urge to forge on. So, therefore I want to sincerely appreciate you once again. Thanks for this honour and I pray that as you had honoured me, the good God will continue to honour you and your establishment will continue to prosper even in the midst of all odds. Because no matter what, when you are telling the truth you will always stand out. God detests lies, insincerity, malice which has become the normal practice in the social media world today. I commend your leadership and I pray that God will continue to be with you and prosper your establishment,’ she concluded.

Mrs. Ajimobi is the initiator of many human capital development projects which include Access to Basic medical Care (ABC) Foundation aimed at providing easy access to Basic medical Care. She has also created Mini Clinics for Widows and the Aged, not to talk of the establishment of ICT Center for Women in Public Service and monthly food provision support programme called ‘Ajumose Food Bank’; Provision of educational materials for the indigent children under Educate A Rural Child project just to mention but a few out of her several other poverty-eradication projects. She complements her husband excellently well in providing humanity service to the society.

No wonder her husband, His Excellency, Senator Abiola Ajimobi was made the ‘Aare Atunluse’ of Ibadan land and Mrs. Ajimobi the ‘Yeye Aare Atunluse’ of Ibadan land. They are a wonderful couple, great parents to their children and good companion to their close friends and acquaintances. There has never been a dull moment with them; They laugh, joke but at the same time highly disciplined and extremely blunt, which perhaps is why they are often times misunderstood.