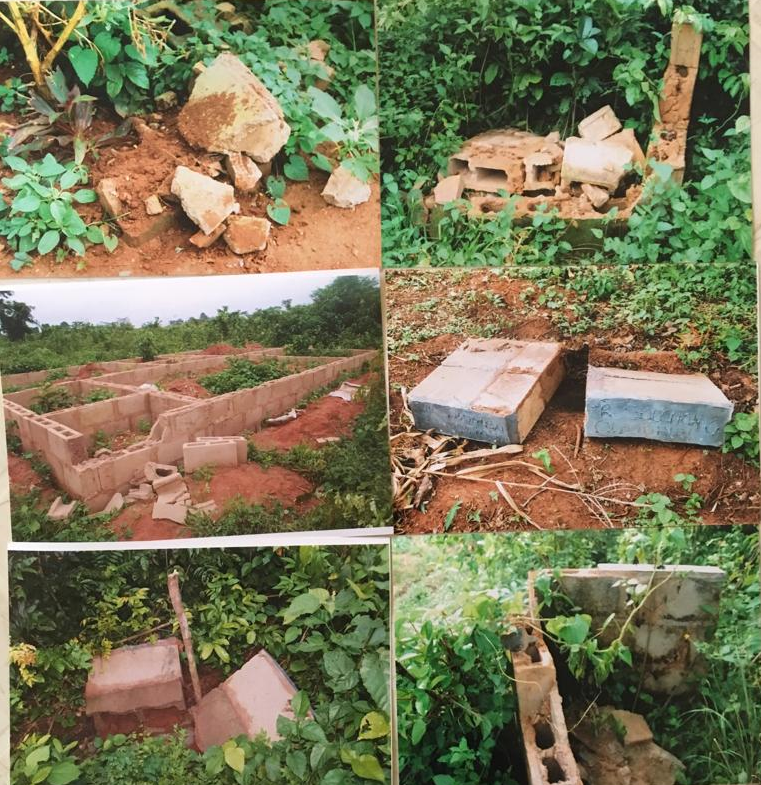 – Says Land Grabbers After His Life

Otunba Rafiu Oganla Balogun, the Otunba of Asayan Isadomin, has called on all well-meaning indigenes of Ogun State and the executive Governor of the State, Prince Dapo Abiodun to save him from imminent threat to his life by notorious land grabbers who have invaded his ancestral land, destroying properties and taking possessions of landed properties illegally.

Speaking with City People Magazine, Balogun stated that the notorious land grabbers in conjunction with a popular real estate company, New Creation Property, invaded the land belonging to the Oganla family in two buses some days ago in the afternoon. They wore masks and shot indiscriminately, chasing labourers from their respective sites and injuring many.

He stated in his podcast made available to City People on Friday, July 19, 2019

“My name is Rafiu Oganla Balogun from Asayan Isadomin. 14 years ago, when my father was alive with his younger ones, he called me and my elder brother whose name is Oganla Mustapha to help get buyers for the family land.

“So while I was working with Adeoye to mend a fence, being my boss, so I took the documents to him. When his agent found out they called me and requested that I bring the documents that they will buy the land. My boss said they were willing to buy one acre for N700 000 naira per acre. So after I collected the document, the called me 3 days later and gave me 3 million naira, I said this is 3 million but they are selling our land for N700,000 per acre. He said they are aware and will collect the documents after paying the balance for the numbers of acres they will eventually buy. For 14 years, we never heard from them.

“When we met with the Adeoyes, he said I should be patient for a while. All the elders who were the stakeholders died within these 14 years. They now came to me in the company of notorious land grabbers in the area, that they wanted the land they paid for some 14 years ago.

“I have called my brother to speak with these thugs too, but he said he knows nothing about. These thugs are his bosses; they are Adeoye, Olorioko, and Sanu Alado. So I believe that my brother is part of the plot.

“They have been threatening to kidnap and kill me, and I have reported to adequate quarters. I have not gone home ever since because I have been told they are looking out for me everywhere.

“One of them told me to bring 2 million naira to keep them away from the land and I told them it is not possible because they are the ones owing my family unpaid balance.

“I have challenged them to bring evidence of ownership or receipt of purchase as proof that I sold any land to them.

“Even my brother has no idea where the land starts and where it ends. “I expect them to  call me and ask where the land they bought and I will show them.

When asked what he thinks should be done, he said he would request that the government helped him secure his land and save his life from his brother and the land grabbers.

According to him, those who are in the conspiracy include;

He added that New Creation Property has paid them a huge sum of money to ensure that those lands are secured for him by all means necessary.

He added that these land grabbers have done the same thing to Sodeko’s family, and Asemegun, they invaded the lands and took it by force.

“We have also written a petition to Ogun State Commissioner of Police. We sought the help of the Nigerian Civil Defense Corps. But these hoodlums have informants who tell them when security operatives are around”, he said.

City People magazine made attempts to put a call across to all the parties involved but all effort to reach them in person and on several calls attempt proved abortive. The contact on the website of New Creation Property has also been switched off after our first contact.

How I Have Maintained My Killer Shape – Popular Actress, BIODUN OKEOWO