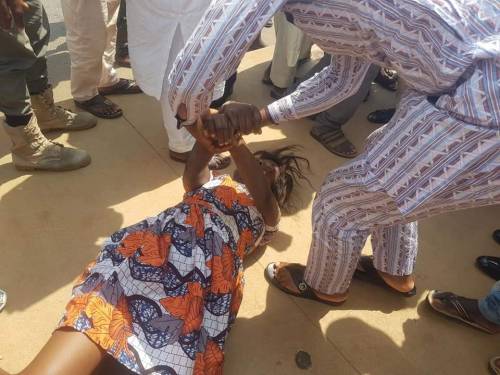 There was panic at the Banex Bridge, Abuja, on Friday when an unidentified middle-aged woman collapsed and vomited blood.

The woman was said to have been healthy without any sign of illness before the incident.

However, she became unconscious and fell to the ground, causing panic among passers-by.

When SaharaReporters visited the scene, the woman was still on the ground with blood gushing out of her mouth without anybody moving close to her.

Some of the persons at the scene of the event were afraid of moving close to her for fear of contracting disease especially COVID-19.

Though it cannot be ascertained if she was suffering from the virus but she was still breathing as at the time of this report.

Meanwhile, some police personnel and Vehicle Inspection Officers arrived at the scene and took the unknown woman to a hospital for treatment.

READ ALSO: RONALDO IS FIRST FOOTBALLER TO EARN $1B – FORBES

Ronaldo Is First Footballer To Earn $1b – Forbes

NCDC Issues New Guidlines On Discharge Of For COVID-19 Patients