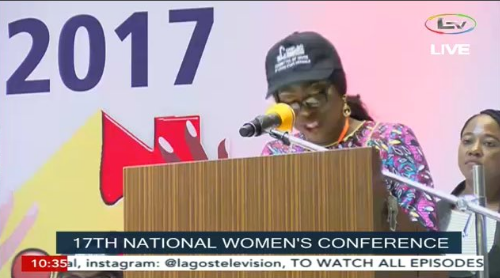 The annual National Women Conference of the Committee of Wives of Lagos State Officials (COWLSO), kicks off on Tuesday, October 24, 2017, with the Theme “She Creates, She Transforms”

The theme of the just concluded event, which is the 17th edition, has been described as most appropriate, apt and timely, considering confounding uncertainties, which are said to be large as a result of the increase of the high level of gender marginalization that goes on across Nigeria.

The event which is scheduled to run for three days at the Eko Convention Center, Eko Hotel & Suites, Victoria Island, Lagos has so far brought together over three thousand women from Lagos State and other states in Nigeria who sent delegates as they deliberated on critical issues confronting family units to proffer practical solutions aimed at achieving sustainable development by creating necessary support systems and policies to strengthen the home front, thereby strengthening the nation.

The opening ceremony had top society men and women from various industries in attendant. It was also a galaxy of southwestern governors as the Executive Governor of Lagos State, Akinwunmi Ambode was present to support his wife and host of this year’s event, Mrs. Bolanle Ambode.

The royal father of Lagos state, Oba Riliwanu Akinolu was also present to grace the opening ceremony as wives of governors from western states took the front stage.

There are also lots of choice gifts and prizes, ranging from baskets of confectionaries to boxes of beverages, creams, clothes, perfumes, refrigerators, deep freezers, shops and six brand new cars to be won this year.
Popular Lady Mechanic was the first to bag an honorary woman of the year award from the wife of Lagos State Governor, Mrs. Bolanle Ambode