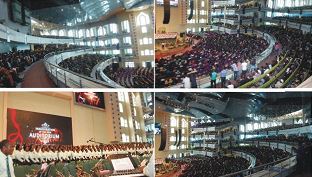 Last week, in Lagos, Deeper Christian Life Ministry officially opened their new church auditorium in the Gbagada area of Lagos. It was commissioned by the Vice-President Yemi Osinbajo. According to the church, the vision for a befitting international headquarters for Deeper Christian Life Ministry had been long conceived. Several attempts were made in the past to acquire a secure location without success.

However, sometime in 1979, the present location in Gbagada area of Lagos, was acquired. According to the church, this land is significant for the singular reason that it is accessible to virtually all parts of the city. Worshippers, visitors and guests arriving from any part of the state can easily access Gbagada via the numerous road networks. Moreover, Ghagada’s emerging status as a business district and mostly middle class residential area accords it additional relevance. And today, this once sleepy community, marshy land fill is the base of one of the most modern and imposing worship centres in Nigeria, the new international headquarters of Deeper Christian Life Ministry.

It could be said that out of a supposedly unattractive landscape, beauty and elegance have emerged. The new church location was nothing but a marshy low land infested with snakes, scorpions, snails, fishes and reptiles. It was a piece of land lacking appeal from individuals or estate developers until the church acquired it. First, rain and waste waters from the community collected there, filling it with silt and dirt. Anyone who was interested must have considered the cost of several layers of sand-filling that must be done over a period of time to guarantee a future building. But the Deeper Life lives and walks by faith.

Commencing the construction of the first 30,000-capacity auditorium in 1980, was essentially an act of faith. With steel stanchions, the auditorium was considered to be a luxury considering where the church was coming from and the fact that it had been without a fellowship centre of its own for many years. Weekly fellowships – Monday Bible Study and Thursday Revival sessions – ran along with construction activities and continued until the hall became inadequate for the growing membership. Gradually, other adjoining auditoriums were raised and completed. In all, five halls covering the entire land-space measuring a little more than an acre were built up.

Additional space was secured across the road with a structure to accommodate the  children church. Besides, the church rented blocks of flats nearby from owners of properties for offices and administrative purposes. Without doubt, the arrival of Deeper Life Bible Church at Gbagada opened up the developing communities of Soluyi, Ifako and Atunrase for residential and business opportunities. Soon, property speculators began to acquire and build structures to accommodate the attendant ballooning human traffic.

The old structure continued to experience different forms of renovation and maintenance for more than two decades until 2005 when the church took a bold decision to commence work on the new edifice. The soil texture of the land was a big issue to consider if a standard multi-storey building was planned. In this case, piling (a process of pushing stone or steel into the ground to serve as support base) was compulsory. The piling work was awarded to Messrs Trevi Foundation on 17th June 2005; this foundational work took about a year to complete. Afterwards, Cappa D’Alberto Construction Engineering Company began the first phase of the 30,000-capacity super-structure on 8th March 2006.

At various stages, the architectural and structural details were reviewed and modified to achieve the goal of a modern international church auditorium in line with the vision of the founder. The church has had to cut through numerous challenges to make the project a reality. These challenges include responding to technical, economic, social and regulatory dictates.

Constructing a 30,000-capacity church auditorium with adequate offices and facilities is obviously an ambitious project; what with the limited land-space! Of course, standard would not be compromised, irrespective of the challenges. Space became a huge challenge that must be overcome. Beside the option to raise the floors to a permissive level, the other is to acquire more landed properties and buildings which were not readily available. The church embarked on a difficult shopping for land, and convincing land owners to sell their properties. Through it all, the Lord granted abundant grace and favour and made everything beautiful in His time.

The residents’ apprehension that the presence of a mega church would destroy the status of the community was assuaged when the church embarked on the construction of a multi-million naira overhead bridge. Designed to specifically serve and ease traffic around Soluyi/Oduwaiye/Diya/ General hospital roads, the bridge is a testimony to the church’s social responsibility and public relations consciousness. On February 27, 2018, the Lagos State Governor commissioned the bridge, which now spanned the entire length of the parallel Oduwaiye Street, complete with traffic lights. It was a testimony to the church’s commitment to the welfare of residents. Among numerous advantages, the bridge will allow motorists and pedestrians unfettered access to other road networks even during church service sessions. At its inauguration and commissioning, the Lagos State Government gave kudos to the church for the initiative and enormous sacrifice to embark on a project of such magnitude for the benefit of the masses.

The headquarters auditorium itself comes complete with modern and latest facilities and equipment for the comfort and convenience of worshippers. It boasts of some of the latest gadgets and devices both for safety as well as security of the congregation. The main building consists of a four-storey amphitheater with Central airconditioning units, chiller farm, and Air handling Units. There are also modern toilet facilities connected to a Central Sewage System, Standby power generating units and Panel Rooms (High Voltage and Low Voltage), 7.5 MVA dedicated public power, and 2.5 MVA transformers. The structure also houses a multi-purpose hall, water treatment plant, modern sewage treatment plant, two industrial boreholes, and fire fighting equipment. Fire hydrant and hose reels, office facilities in five floors, six and 12-passenger elevators, etc. Adjoining the facility is a four-level framed structure car/bus park measuring 9063 m2. It can accommodate 450 cars and 75 buses, toilet facilities, restaurants and two-level sewage treatment plant.

Special mention must be made of the power supply system. Aside from direct supply of power from

the national grid, there are four diesel engines of 2275 and 1275 KVA on standby to supply electricity.

Moreover, each engine is insulated to muffle noise and safeguard environmental pollution.

The safety and security of worshippers is not left to chance. There are fire alarm devices, extinguishers,

smoke detectors, emergency exits, and early warning devices. Entrance and exit locations are not only numerous but strategically positioned to enable quick and easy access. The possibility of a stampede is zero as there are enough outlets to forestall any danger. Also, modern security equipment have been procured and installed to curb security breaches, considering the security challenges in the world today.

As the Deeper Christian Life Ministry continues in earnest with the propagation of the Gospel to the farthest recesses of the earth, in anticipation of the imminent return of the Lord Jesus Christ, the future can only be exciting, and a befitting glory to God.