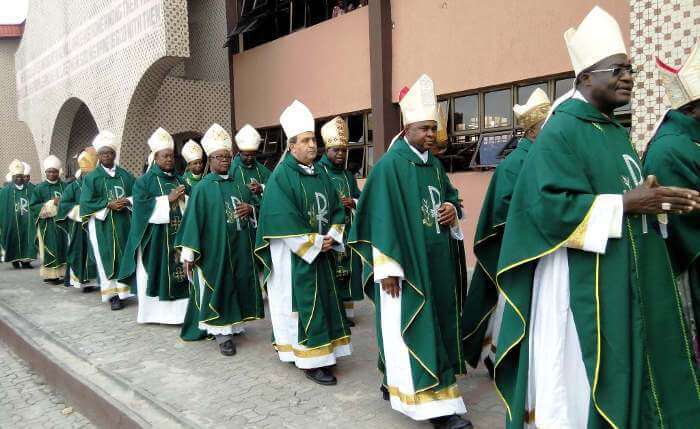 The clergies made this known in a communiqué signed by Augustine Obiora Akubeze and Camillus Raymond Umoh, president and secretary of CBCN respectively, at the end of their second plenary meeting held between September 11-20 in Abeokuta, Ogun state.

The bishops said the Buhari administration lacks transparency and accountability.

They also said Nigerians remain manifestly religious, but this seems to have little effect on their socio-economic and political lives.

“While praying for solutions to our problems, we must endeavour to be just in our dealings with others, work hard in fulfilling our duties, and collaborate with others in the social transformation of our country,” the communiqué read.

“We observe that our democracy is derailing from what it should be. The qualities of accountability, transparency, independence of the judiciary, respect for fundamental rights, observance of the rule of law, and fair and credible electoral process, to mention only these, are still lacking. We therefore urge all politicians, businessmen, religious leaders, public servants and indeed all citizens to live out the values of their faith for the common good.

“There are, unfortunately, still many instances of killings as a result of banditry, kidnapping, assassination, armed robbery, reckless use of force by security agencies and lynching. Lately, too, there is an upsurge in the cases of suicide, even among our youths. Furthermore, the clashes between herdsmen and communities, and the activities of Boko Haram insurgents have continued, in which many innocent people lose their lives.

“These make living in Nigeria very precarious. We recognise the efforts being made by the government to fight insecurity in the land. However, we emphasise that a lot more still needs to be done in this regard.”

The bishop said they observed that the federal government, in which the power to control the major security agencies is vested, is overwhelmed, and therefore there is a need for proper decentralisation of these agencies for effective results.

They also said they have noted with dismay that many months after the elections, many parts of the country are still in disarray.

They said the country is badly divided, and “this is evident in appointments to positions of national importance, sharing of resources, and distribution of social amenities”.

“We urge especially the federal government, to ensure that it does not allow ethnic or religious hegemony to prevail in our multi-religious and secular state. No one religion should be favoured over another. There should be fairness, justice and neutrality in relation to all religions and ethnic groups, for where there is no justice, there can be no peace, unity and development.”

The bishops have always been critical of Buhari’s government.

In 2018, the bishops called on the president to resign over the incessant attacks in the country.