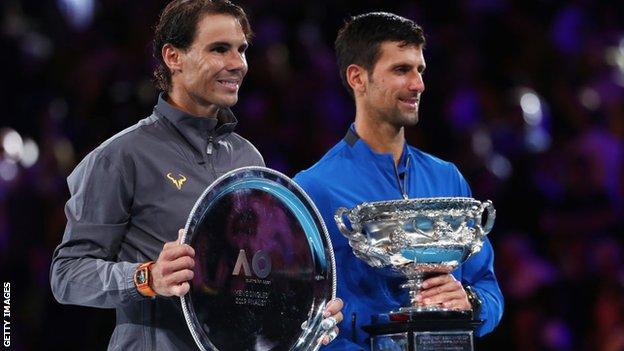 Novak Djokovic won a record seventh Australian Open title and a third successive Grand Slam as he swept aside Rafael Nadal in Melbourne.

The Serb, rarely troubled on his serve, won 6-3 6-2 6-3 for his biggest victory in a major final over his great rival.

A forehand winner down the line brought up two championship points, Djokovic taking the second when Nadal clubbed a backhand long.

Djokovic, who was the top seed, fell to his knees after sealing another triumph on Rod Laver Arena, smacking the court with both hands and screaming towards the sky.

The reigning Wimbledon and US Open champion claimed his 15th Grand Slam title, moving him outright third ahead of American Pete Sampras in the all-time list, closing in on Switzerland’s Federer (20) and Nadal (17).

Djokovic has now won 13 of his past 16 meetings with Nadal, who has not beaten the Serb on a hard court since the US Open final in 2013.

He leads 28-25 in their record 53 meetings between two male players.

Djokovic continued his fine record of going on to win the tournament every time he has reached the semi-finals, while Nadal lost for a fourth time in the Melbourne showpiece.

The result meant the 2009 winner was unable to become the first man in the Open era to win all the Grand Slams at least twice and was the first time he had lost a major final in straight sets.