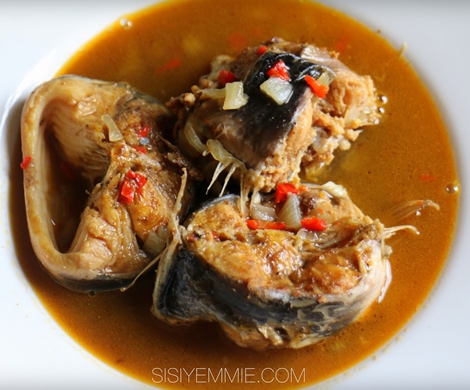 A practitioner at the Federal Medical Centre in Abuja has warned the general public of the life-threatening repercussions of excessive consumption of catfish.

Dr Arikawe Adeolu, revealed that excessive consumption of catfish could increase the chances of developing cardiovascular diseases.
According to Vanguard, the practitioner at the Federal Medical Centre, Jabi, Abuja, who gave the warning, said that catfish contained omega-6 fatty acids, which could increase the level of inflammation in the body.
He added that inflammation was the underlying cause of cardiovascular diseases, certain cancers and diabetes. He said that although catfish also contained omega-3 fatty acids, which had a lot of health benefits, the ratio of omega-6 was far greater than omega-3 fatty acids.
While explaining further, Adeolu said that this made it necessary for the fish to be consumed in moderation to prevent health complications. “Catfish is rich in two fatty acids – omega-3 fatty acids and the omega-6 fatty acids.
“The omega-3 fatty acids help reduce the concentration of bad cholesterol in the blood stream and increase the concentration of good cholesterol in the blood stream.
“It also helps protect the heart and the cardiovascular system from any form of disease, prevents inflammation within the body and helps reduce the quantity or concentration of inflammatory substances in the body.
“The underlining basis for most cardiovascular diseases, diabetes, cancer, Alzheimer disease and many other diseases that we know today, is chronic inflammation, which signifies a long standing inflammation in the body.
“This is where the catfish controversy comes in. A lot of reports have advised against eating it and this is because although it contains omega-3 fatty acids, which have many health benefits, it contains more omega-6 fatty acids.
“Omega-6 fatty acids are pro-inflammatory in the sense that they increase the level of inflammation within the body and make one more predisposed to any kind of disease.
“When catfish features a lot in your diet, you consume more omega-6 fatty acids in your diet than the protective omega-3 fatty acids.
“Therefore, you are more predisposed to diseases if you consume a lot of catfish. The optimal ratio of omega-6 fatty acids to omega-3 fatty acids is supposed to be four to one, but because the catfish is reared artificially and is fed with synthesized food, the ratio can be up to ten to one,’’ he said.
Adeolu also said even though there were a lot of controversies surrounding the consumption of catfish, it still held some advantages over most fishes consumed today, adding that catfish was a good source of protein, rich in essential amino acids needed to build muscles, bones and different tissues in the body.
He explained that catfish contained a moderate amount of calories per serving or per gram, hence, was an ideal choice for those watching their body weight.
According to him, catfish is rich in phosphorus and magnesium, which are essential micro-nutrients that play a significant role in a lot of biochemical processes in the body.
“Catfish has a very low amount of mercury, which is very toxic to the human body and can, when consumed in large quantities, damage the nervous system,“ Adeolu said.

A facebook user by the name, Shima Gyoh who according to his profile is a

Professor and Chief of General Surgery at Benue State University [Another expert, obviously] had his own opinion and it was clashing with what Dr Arikawe Adeolu said.
*********
Read his comment below….
Cat Fish is not Dangerous for your Health
I was alarmed when I read “Why eating catfish is very dangerous for your health’” credited to Dr. Arikawe Adeolu, published on the internet by tori.ng on 05 January 2017. The danger in catfish was alleged to be from its high content of omega-6 fatty acids apparently responsible for chronic inflammation that leads to cardiovascular diseases. The statement is not correct, and I can only suspect that there is a serious misunderstanding somewhere. The press statement further said,
“The underlying basis for most cardiovascular disease, diabetes, cancer, Alzheimer’s disease and many others is chronic inflammation.”
This is again wrong. Inflammation is the body’s attempt to stop or limit the damage being caused by other factors, it is not itself a causative factor. Whether acute or chronic, it is the body’s basic means of fighting attacks of infection and other noxious diseases like cancer; without it the body cannot survive. If there were no inflammation, every wound you have had since birth would remain unhealed. It is the battle order of immunity, and when depressed, the organism can succumb to infection from normally “harmless” organisms and multiple cancers. We see this in HIV/AIDS. All inflammations, acute or chronic, are always desirable protection of the body. There are drugs that can dampen inflammation, but that would enable the offending factor to now easily overcome the body unless you concurrently remove the offending cause as well. It would be a foolish country that withdraws its army under enemy attack on the basis of stopping the fury of the battle.
Omega-6 fatty acids which the article points out as the dangerous component of catfish are present in many other daily food items: fruits, nuts, whole grains, vegetables, vegetable oils, every meat you can think of, etc., no more in catfish than these. Apart from meat, many of these are often recommended for reducing cardiovascular diseases in diets. (please look up Mediterranean diet).
The article talked about excessive consumption of catfish. It did not mention how much nor did it give even one example of high mortality among people somewhere in the world caused by “excessive” catfish in their diet. Many people I have treated for stomach ulcer ate plenty of egusi stew, but it is patently false to conclude that egusi stew, therefore, causes stomach ulcers. Even correlation is never the same as cause.
If you like catfish, please carry on. You will de campe!
OP-ED: This is not by any means the view of City People Online. These are the opinions of experts and we only put it up here.
Is Eating Catfish Very Dangerous for Your Health? – Medical Expert Reveals was last modified: May 17th, 2017 by Arinze Ago

How Long Can Sperm Live?