Engr. Ife Oyedele Reflects On His 2022 African Man Of The Year Award 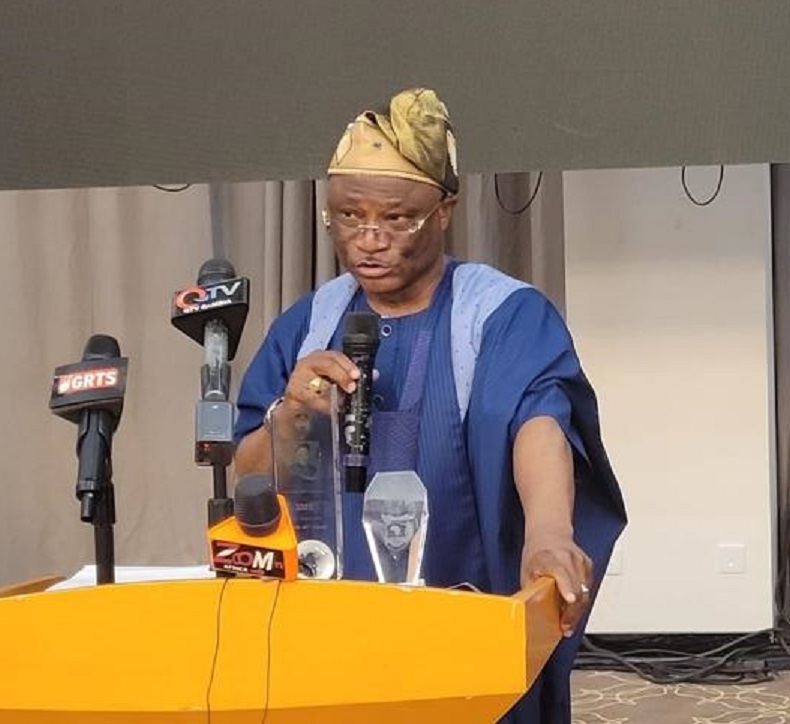 A few weeks back, Engr. Ife Oyedele was honoured in Banjul with a prestigious award. He won the 2022 African Man Of The Year Award and delivered a keynote address at the event which drew a lot of applause.

Engr. Oyedele is an accomplished and eminent Nigerian, who is well respected for his numerous achievements in life. Of course, those who know his worth are not surprised that he was being celebrated.
A few days back, CityPeople Publisher Seye Kehinde got him to reflect on the essence of the award and his experience in that country. Below are excerpts of the interview.

Congratulations and welcome back from Banjul. How was your trip?

Thank you Seye. There is no doubt that it was a pleasant trip that revealed so many things about Africa. Incidentally, apart from being the recipient of the African Man of the Year 2022 Award, I was also given the task to deliver the Keynote Address titled; “Building a Developed, Valued, and Respected Africa Now: A Clarion Call for a Collective Participation by Africans for African-led Solution.”
Therefore even the itinerary of the flight from Abuja through Lome in Togo, and Accra in Ghana, and Freetown, in Sierra Leone to Banjul in The Gambia tells a story about the development of Africa. It underscores the precarious state of intra-African trade. The Gambia, in my mind, is like a chaste young village lady that is ready to explode with a little help. And I discovered that most Africans would rather that help will come from within Africa and by Africans. It was another learning curve and a lot of experience for me.

How did you feel receiving the African Man Of The Year 2022 Awards?

They have been in business for 32 years! However, the last 2 editions were held in Kenya and the UAE. I understand that it was in UAE that the First Lady of The Gambia invited the Organisers to stage the award ceremony in Banjul. So it is actually an African Award and the 2022 edition is the 12th in the series.
Past recipients include President Julius Nyerere, Revd. Father Matthew Kukah, Mr. Peter Obi and Mr. Ralinga Odinga of Kenya but I think I am the first to be named African Man of the Year. It is a very significant award because until the day before the award ceremony I never met anybody in the Organisation.

In fact, I was initially skeptical of the award and my antennas were alert, expecting monetary demands. But I was disappointed. The Organisers never called or contacted me except when they requested for my preferred photograph.
I was told my choice is from 175 Africans, some of whom included Presidents of other African countries. I am grateful to God for His glory upon me. It is an honour I will cherish for the rest of my life.

What are the takeaways?

One of the takeaways for me is that you don’t have to be a President or Governor to be noticed and appreciated.

From the feedback from a lot of people, I came to appreciate that those little things we do when we think people are not watching, matter.
My philosophy has always been to be the best and strive for excellence wherever you find yourself. It is imperative for one to maintain a high level of integrity in every position one finds oneself.
I discovered that people are aware that I am a compulsive giver and that I value my integrity and honesty. I also found that people know that I am very diligent and hardworking.
And of course, the highlight of the whole show was the quality of the Keynote Address which I delivered. Many in the audience confessed that they were rooted in their seats during the lecture.
Seye, I encourage you to read the paper which you have with you. The paper has been commended by everyone who has read and is receiving positive reviews in high places. I also observe that Nigerians are highly respected among Africans. That is very instructive to me.

How far with your political project? What are your plans?

Hmmmmm. Let me answer your question very honestly. My political philosophy is aimed at the development of our country for the common good of all. I have always believed that those of us who have the opportunity must participate in the decision processes wherever we find ourselves; in our Old Boys Association, University Alumni Association, Social Club, Church, Landlords/Residents Association; etc.
If you do not, you will not be able to influence such decisions and will be compelled to obey decisions taken by others. In effect that is the trajectory of my political project.
And I am ever prepared to serve in any capacity as long as I know it will engender developmental progress and improve the lives of fellow Nigerians, especially the youth, the women and the less fortunate. So my plan is to continue to work in this direction.

As for my plans, the corporate interest of whatever group I belong to is more germane. I am a founding father of APC. I was a member of the APC Merger Committee. In fact, I am the one who has the singular honour of designing the Logo of the All Progressives Congress. I am a committed and loyal Party man and I believe everybody can say the same thing about me. So I take things in the natural sequence, the next task before us now as Party members are to ensure that our candidate is elected President of Nigeria in the next General elections and we have controlling seats in both Chambers of the National Assembly.
Thereafter, I will take a decision on my next move.

Engr. Ife Oyedele Reflects On His 2022 African Man Of The Year Award was last modified: September 6th, 2022 by Seye Kehinde

SHOCKER! Why Pres. BUHARI Is Looking @...