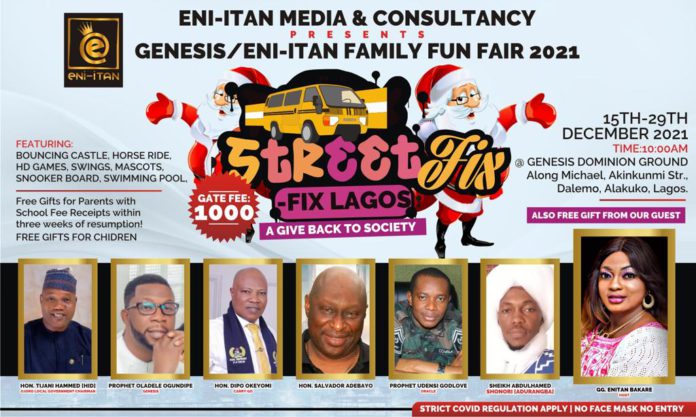 Eni-Itan Media and Consultancy is an impact driven media movement, whose main course is to imbibe in growing children, women and youths the need to see as world changers, and to equip them with the skills and tools to conquer the world.

“It’s a mandate from God to all successful individuals in all fields of work to return to the universe towards healing its habitats ( people)” Says the CEO!

God is here! For all who has an interest to live peacefully and in good health heed to the voice of the living God and universe. The few chosen ones mandated by God to create a new earth where masses are given a new hope are called ENI-ITANS!

The give back family event is taking place at Genesis Dominion Ground along Michael Akinkunmi street, Dalemo, Alakuko, Lagos State.

The event which is endorsed by Honourable Hammed Tijani (HID), is for the benefit of Ojokoro residents.

The family fair is to motivate fourth Generation to stay away from drugs so as to have a great future better than them and self fulfilment.

The event which is code-named STREETFIX-FIX LAGOS, will continue in other local governments to fix the ills of  masses of Lagos State endorsed by Mr Babajide Sanwo Olu, Governor of Lagos State.

The train has started for the ENI-ITANS of the state to build a new redeemed society for us all. Are you an ENI-ITAN? Participate!!

Balogun Akin Oshuntokun Celebrates His 60th With A Lecture in Lagos.