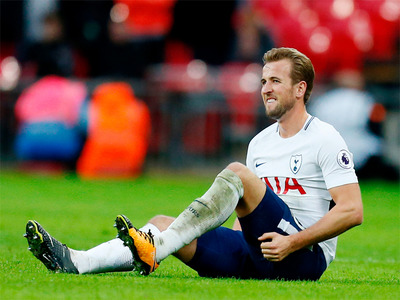 As Tottenham Hotspurs are set travel to Old Trafford for the lunch-time kick-off on Saturday, the club have confirmed that their star striker, Harry Kane will miss the massive Manchester United clash with a hamstring injury, and watch on from the sidelines.
The 24-years-old has scored a league-high eight goals in the Premier League this season. The England ace who has scored 17 times in just 13 games for club and country this season, looked to be in pain towards the end of Tottenham’s 4-1 win over Liverpool last weekend.
Following the knock, Spurs boss Mauricio Pochettino had all-but confirmed the potential injury, and when quizzed on Kane’s availability, the Argentine chief said: “We’ll see, we’ll see.
“We need to assess the team because we were forced to rotate [against West Ham] for different reasons and we’ll see what happens in the next few days.”
Now Tottenham have confirmed Kane is in fact injured, but have failed to state how severe the knock is or how long he could be out for.
However, Pochettino did reveal: “We cannot take a risk with Harry. It is only a small injury but there is no sense risking turning it into something more serious.”
The injury also puts Kane in doubt for the huge Champions League clash with Real Madrid at Wembley on November 1.
Kane already missed Spurs’ 3-2 defeat to West Ham in Carabao Cup midweek, with Fernando Llorente tasked with filling his boots.
The news will come as a massive blow to Tottenham fans, who would have been itching to see what Kane could do against United.
Both clubs are sitting on 20 points in the Premier League this season, with the game already gearing up to be a real six-pointer.
EPL Top Scorer, Harry Kane to Miss Man United Clash Against Spurs was last modified: October 27th, 2017 by Arinze Ago

How My 35 Year Marriage Has Worked – Sen. MAMORA’s Wife, OLANLESI Opens Up