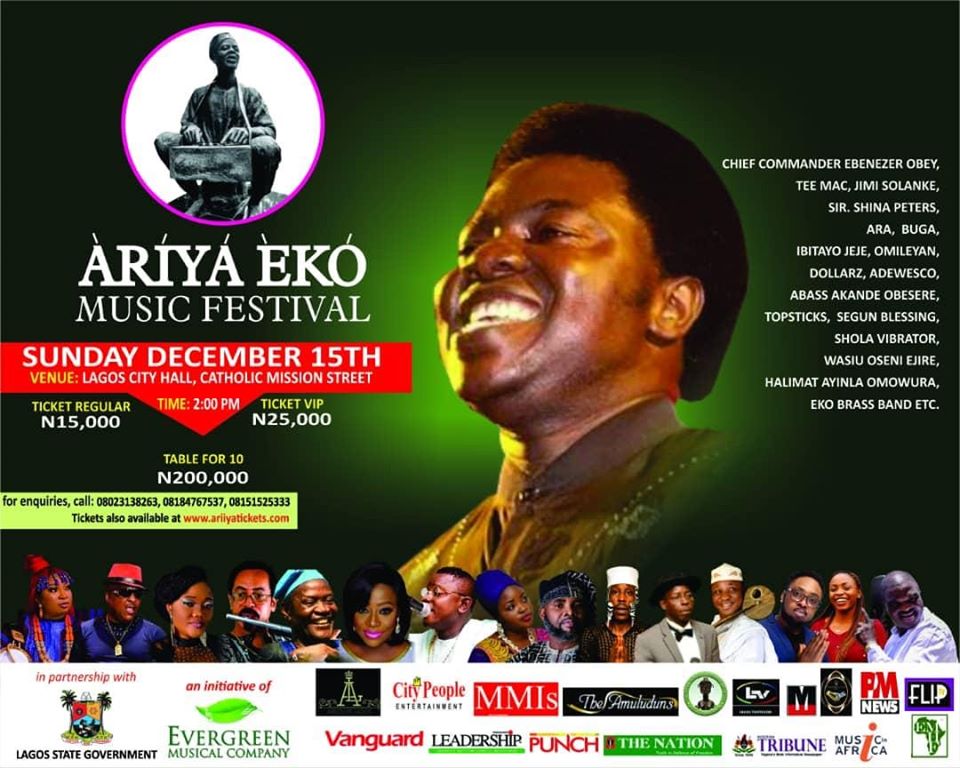 For the first time in African music history, Nigeria’s number one collector and promoter of indigenous and high life music, Evergreen Musical Company is mobilizing a galaxy of legendary music stars in a maiden edition of the Ariya Eko Music Festival, billed to hold on Sunday, December 15, 2019 at the Prestigious City Mall, Lagos Island.

The festival aims to showcase Nigeria’s indigenous music and its tourism potentials. Nigeria’s number one collector and promoter of indigenous and highlife music, Evergreen Musical Company has put together the show to bring sanity and control to the music industry, in view of the pervading downward trend in morals and societal values.

According to the key convener, Bimbo Esho, Ariya Eko is similar to another show tagged Faaji Agba Eko put together last year with the aged and elderly in mind. The likes of Pa Orlando Julius; the great flutist, Tee Mac; folklore singer, Pa Jimi Solanke; Buga; female talking drummer, Ara; Yinka Davies and many others were in attendance.

Speaking at the press briefing held on Tuesday, December 3, 2019, Bimbo Esho, added that this year’s event will include all other genres. It will also include the general musical populace of both the young and the old.

“The most prolific features of the Ariya Eko Music Festival are to preserve, promote and propagate our indigenous band culture and to give us a musical identity. “Therefore, music that will flow from the past to the present, which includes: Folk Music, Highlife, Juju, Apala, Afrobeat, Agidigbo, Sakara, Hip-Hop, Waka, Fuji, etc., will be showcased.

“The event will hold December 15, 2019 and is to be staged here in Lagos. Lagos is the epicentre of entertainment. And since entertainment and tourism are one of the main thrust of the Governor Sanwo-Olu’s government to fulfill the “E” components in its THEMES Strategic Thrust, with this music concert we plan to take tourism and entertainment to the next level in Lagos State.”

Commander Ebenezer Obey (MON), who was also at the press briefing, expressed his gratitude to the organizer for rejuvenating Nigeria’s most cherished classic music pastime, confirmed that he will be at the event and also performed live, as he will be inducted into the Evergreen Music Hall of Fame and other musicians performing at the Ariya Eko.

He took the media through the journey of how he started music professionally in 1957 and al the hurdles that were faced by the players in the industry at the time while urging new breed of music artists to dish out creative medleys that will stand the test of time.