Home Education Everything You Need To Know About RAPE!
Education 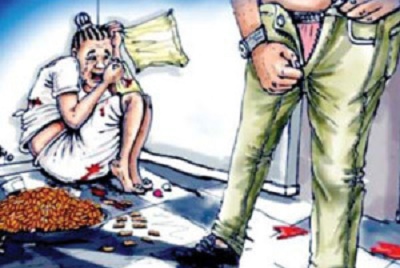 It is rather appalling that the occurrence of the heinous crime of Rape in Nigeria has taken an unprecedented dimension which is encouraged by the culture of silence associated with it. In times past, the incidents of rape were reported in isolated events but it is somewhat unfortunate that this ugly trend is fast eating deep into the fabric of the society and becoming a part of our lives. Rape is a gruesome crime which aside the violation of the fundamental human right of privacy of its victims, also has devastating effects both physically and psychologically on them and should not be tolerated by any stretch of imagination.

Under the Criminal and Penal codes which regulates crime in the south and north of Nigeria respectively, rape is defined as an act of sexual activity procured in coercive circumstances between and a man and a woman who is not his wife. It could be with the use of violence, threat, intimidation or false representation.

The offence of rape will also be committed if the victim was in a state where consent could not be given or the victim does not have the capacity or is unable to comprehend the nature of the act. This will encapsulate children under the age of consent, people of unsound mind or people in a drunken state.

The penalty for rape in Nigeria is life imprisonment which should serve as huge deterrent; but rather, the cases keep escalating rather than abating. Statistics shows that the perpetrators of this dastardly act are mostly people who are well known to the victims or their families and people in position of trust. It is also saddening to note that children constitute the larger portion of victims of rape.

It is very commonplace to read about cases of children who were defiled by their school teachers, school bus drivers, sport coaches, close family members and even their parents. For older victims, perpetrators mostly consist of close friends of the opposite sex, doctors and religious leaders.

Perpetrators of the crime of rape have increasingly become emboldened to commit the crime because of the lack of legal consequences in most cases.  Most victims decline to report rape to the police or seek medical attention because of the fear of being disbelieved or blamed for the occurrences rather the perpetrators.

For the matter to be prosecuted, it must first be reported formally to the police who are the only organ that can investigate and arraign the suspects. However, most victims decline to report to the police because of the fear of being disbelieved or derided which will further increase their pains. Most policemen who interact with rape victims do not possess the requisite training to handle such sensitive cases.

In situations where the victims gather the courage to make reports, the police will start to gather evidence to support the claim which may include medical evaluation at a hospital.

The hospitals are required to conduct a specialized test commonly carried out with the aid of Rape kits. A rape kit is very essential in the medical assessment of a rape victim but it is ironical that most hospitals in Nigeria do not possess it.

It contains a container that includes a checklist, materials, and instructions, along with envelopes and containers to package any specimens collected during the exam. It also includes bags and paper sheets for evidence collection, combs, documentation forms, envelopes, instructions and materials for blood samples swabs.

The importance of DNA evidence in rape cases cannot be overstated because it carries weight in court. Although it is not a legal requirement for the testimony of the victim to be corroborated by other evidences, the presence of medical evidence strongly helps the case of the victim. Conversely, in the event that the medical assessment required is not carried out conclusively, pieces of important evidence could be lost and may be detrimental to the case of the victim. Aside medical evidence, the court corroborative evidence such as injuries sustained, bruises, torn clothes and eye witness testimony.

In the absence of medical evidence, eyewitnesses, bruises and injuries, the court may still convict on the strength of the sole evidence of the witness if appears credible but such cases are extremely rare and this can occasion miscarriage of justice. It is very possible that there were no witnesses at the time the offence was committed because such crimes are mostly committed in private. It is also possible that the victim succumbed without struggling for the fear of an imminent threat of death. The trauma experienced by the victim may have greatly impaired her memory and verbal skills.

This means that in most of such cases, the prosecution of the perpetrator will not succeed will not be able to secure convictions.  Witnesses which will include the victims will have to testify in court under circumstances which may be overwhelming for them. The victim will have to recount her ordeal which may be traumatic in public as trials in court are open to the public. The perpetrator’s counsel will make her sound and appear as a loose woman. At the end of the trial, if the prosecution fails to prove the case beyond reasonable doubt, the perpetrator will be acquitted.

In many rape trials, the guilt or innocence of the accused hinges on whether or not the victim consented to the sexual intercourse. The determination of consent often can lead to distressing cross examinations of rape victims. Those charged with rape have a higher-than-average rate of acquittal, mainly because it is difficult to prove a crime for which there are usually no third-party witnesses.

Apart from the issues raised above which deters victims from reporting incidents of rape, it is my considered opinion that the definition of rape in Nigerian is too restrictive, archaic and not in alignment with the dynamics of the global trend.

It is not comprehensive enough to constitute every act that can constitute rape. Section 357 of the Criminal Code provides that “any person who has unlawful carnal knowledge of a woman or girl, without her consent, or with her consent, if the consent is obtained by force or by means of threat or intimidation of any kind, or by fear of harm, or by means of false and fraudulent representation as to the nature of the act, or, in the case of a married woman, by personating her husband, is guilty of an offence which is called rape”.

Similarly, section 282 of the Penal Code provides that “ a man is said to commit rape who, save where he had sexual intercourse with his wife, has sexual intercourse with a woman in any of the following circumstances: (a) against her will; (b) without her consent; (c) with her consent when her consent has been obtained by putting her in fear of death or of hurts (d) with her consent, when the man knows that he is not her husband and that her consent is given because she believes that he is another man to whom she is or believes herself to be lawfully married; (e) with or without her consent, when she is under 14(fourteen) years of age of”.

These two laws are essential of the same meaning. The essential ingredients of the offence of rape are penetration and lack of consent. Sexual intercourse is deemed complete upon proof of penetration of the penis into the vagina. Emission is not a necessary requirement. Any or even the slightest penetration will be sufficient to constitute the act of sexual intercourse.

From the above, it means that rape is the non-consensual sexual intercourse between a man and a woman who is not his wife. Material elements of the crime are the absence of consent and penetration no matter how slight. Under the Nigerian law, the only person who can commit an offence of rape is a man and only a woman can be raped.

I will disagree with this definition because I have heard of reported cases of women who were alleged to have raped men but the police could not establish a case against them due to the restrictive nature of the law. Further, a man who has been sodomised has no recourse in law which is clearly occasions a miscarriage of justice, discriminatory against a particular gender and as such unconstitutional.

Also, the law clearly gives immunity to marital rape. Our law enables the man to rape his wife without the fear of any legal consequences. In foreign jurisdictions with particular references to the United States, United Kingdom and South Africa, marital immunity has been abolished. It admitted that recognize the sexual activities between couples happens most times with implicit consent and that it will be unreasonable to expect that men will have to require an express consent from their wives each they engage in sexual activities.

However, this not does eliminate the fact that marital rape does not occur. It is proposed that if the marital immunity is abolished, the standard of proof required will be very high. Evidence which may support the victim’s case will be existence of separation, domestic violence and secondary witnesses.

It is proposed that the new definition includes any gender of victim and perpetrator, not just women being raped by men. It should also recognize that rape with an object can be as traumatic as penile/vaginal rape. A new definition which is more inclusive, will likely increase the crime of rape being reported. This does not mean that rape will increased, but simply that it is more accurately reported. It is suggested that there should be more awareness to educate the on when to speak out when it happens to them or around them.

Everything You Need To Know About RAPE! was last modified: July 17th, 2019 by Reporter

Why I Decided To Relocate To ENUGU To Live – Chief ZEBRUDAYA