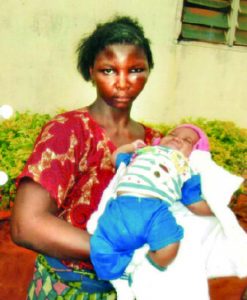 A young Nigerian woman identified as Chinaza Onwuasoanya has confessed to security operatives after kidnapping and selling 20 children.

Twenty-two-year-old Chinaza Onwuasoanya who allegedly kidnapped about 20 children and sold them for N150,000 each has confessed after being arrested by men of the Special Armed Robbery Squad (SARS) of the Anambra State Police Command.
According to Daily Sun, Onwuasoanya was impregnated by her boyfriend in Lagos and returned to Anambra State to have the baby but was too ashamed to go back home to her parents. After giving birth to a baby girl, a friend introduced her to 45-year-old Goodness, who runs an orphanage, which the police allege, was a cover for a baby-trafficking operation.  Onwuasoanya easily handed over the baby girl in exchange for the sum of N150,000 paid to her by Goodness and moved on with her life. The money she made from the evil transaction apparently opened her eyes to the possibility of earning more from the same source. Without batting an eyelid, she moved into child-trafficking, thereby sinking deeper into iniquity.
Recounting her journey into child-trafficking, Onwuasoanya told Sunday Sun: “I got into child trafficking two years ago. I have sold 20 male and female children to Madam Goodness who operates the orphanage. She paid me between N150,000 and N200,000 for each baby I sold to her. I got to know her when I became pregnant and gave birth to a girl on October 4, 2013.  After I delivered the baby, a friend introduced me to Madam Goodness. I took my daughter to her and she gave me N150,000.00, to take care of myself. After that time, I decided to go into child trafficking by kidnapping children coming back from school or getting them in the street. Then I would take them to Madam Goodness. And she would sell them between N150,000 and N200,000. But I was arrested on May 1, 2017, when I stole a set of twins at an estate in Onitsha and took them to my house. Suddenly the father of the twins traced me to my house and came with policemen and I was arrested.”
Onwuasoanya who hails from Ebenebe, Awka North Local Government Area, Anambra State, made interesting revelations to the police while being interrogated. She confessed to being a member of the gang of robbers who killed two policemen, Inspector Shuaibu Usman and Sergeant Julius Matthew, of Police Mobile Force 29 in February, 2017 at Nkpor fly-over, Onitsha and took their AK-47 rifles, which were later used to commit robberies in Nkpor, Obosi, Ogidi, Nkpor Old Road, Awka, Oye-agu. She also assisted the SARS operatives to arrest three members of the gang while the other six members escaped and are still at large. She disclosed that she was always given her own share of the money made during robbery operations, saying that she got between N50,000 and N80,000.
Though the prodigal daughter is now filled with regret, it appears too late, as the Commissioner of Police, Mr. Samuel Okaula, indicated. Besides, she passed up the opportunity to retrace her steps after giving birth to the baby. As she noted, her parents are still alive and probably agonizing over their daughter who deviated from the strait and narrow path and chose the way that has now put her in police custody for allegedly associating with armed robbers and engaging in child-trafficking.
“I have regretted what I did. My parents are alive. It was my friend who introduced to child trafficking and which led me to armed robbery today,” Onwuasoanya said, the reality of what lies ahead weigh heavily on her mind.
Meanwhile, the Commander of SARS, Supol Sunday Okpe confirmed that Ownuasoanya’s confession led to the arrest of three people alleged to be members of the gang. The suspects are: Ifeanyi Onwukwe a.k.a Nger, 22; Chidubem Osita a.k.a Kabaka, 23, and Chijioke Obi a.k.a Abababa, who is 23 years old.
When prodded by Sunday Sun for comments, Onwukwe said: “It is true that we killed two policemen at Nkpor, we went with one vehicle and three motorcycles which we always used for our robbery operations. We always met at the football field at Nkpor to plan our strategies. The SARS operatives recovered an AK47 rifle from us. We used the AK47 rifle to carry out our operations.”
Goodness who admitted to running an orphanage, which had 15 children, however, denied engaging in child trafficking. She added: “Students who got pregnant come to us to deliver their babies, and we take care of them. Also children whose parents died are brought to us too. I don’t sell children rather I take care of them. I have never known Chinasa Onwuasoanya in my life.”
Evil 20-year-old Woman Who Kidnapped and Sold 20 Children for N150k Each Confesses was last modified: June 5th, 2017 by Arinze Ago