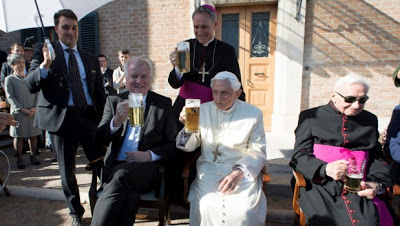 Benedict XVI, who resigned as pontiff in 2013, has celebrated his 90th birthday with a mug of beer and the company of visitors from his native Bavaria in Germany.

Photos by the Vatican newspaper L’Osservatore Romano of the celebration showed Benedict sipping a beer. His brother, Monsignor Georg Ratzinger, also joined the party and enjoyed a pint.

He was born on April 16, 1927, in southern Germany. But since the birthday coincided this year with Easter Sunday, Benedict was feted on Monday.

On a sunny, mild day, guests sat outside the monastery on Vatican City grounds where Benedict has lived since he became the first pontiff to resign in 600 years, stunning the Catholic Church.

The last Pope to resign willingly was Celestine V in 1294 after reigning for only five months, his resignation was known as “the great refusal” and was condemned by the poet Dante in the “Divine Comedy”