EXCLUSIVE: How Pres BUHARI Divorced His 1st Wife, Safinatu Because Of IBB & His Late Wife [The Unedited Story] 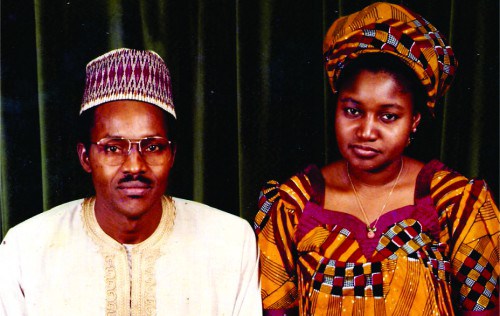 That President Muhammadu Buhari is a highly principled man is not in doubt. Many people can vouch for him that he is as straightforward as his pencil-slim frame suggests. Many people began to take him seriously when he took the painful decision to divorce his first wife, Safinatu who is now late shortly after he came back from detention.

Below is the story of how he had to divorce his wife for embracing gestures from the Babangida regime which not only removed him from office through a coup, then detained him for about 18 months.

When President Muhammadu Buhari was released from detention many years back after IBB incarcerated him, one of the first things he did was to divorce his first wife, Safinatu who is now late.

Safinatu is the woman he married in 1971 at the age of 18. She is the mother of 4 of his daughters. It shocked a lot of people. At that time, Fatima one of his daughters was then an 18-year-old undergraduate of Ahmadu Bello University, Zaria.

What shocked most people about the divorce was the fact that both Buhari and his first wife were very close. This was even attested to by one of his daughters, in an interview in 1992 when she said, “you cannot say my mother did not love my father.

Afterall, we all risked our lives when we first heard of his arrest. We went all the way to Ondo State by road, and my father loves my mother too”.

Truly so. Safinatu took charge of the home when the General was in detention. Also during Buhari’s incarceration, Safinatu’s visits to Buhari then, with her four daughters used to be the one event that usually lifted his spirit. While he was detained, Safinatu visited him about fifteen times at the different detention camps he was kept across the country and on a few occasions, she took the children along  Apart from her and the children, only Mamman Daura, Buhari’s nephew and Dr. Sanni Mamman of Abuja General Hospital were allowed to see Buhari. And so, Safinatu was angry that Buhari decided to pay her back for all she went through by marrying another woman. This was why she packed out.

Although no one has been able to explain why Buhari took that decision, City People gathered that it may have been a function of two things: one, Safinatu’s dealings with General Babangida and his wife, while he was in detention, when indeed, he had expressly told her not to have anything to do with them. Two, the fact that she had no son for him.

As the story goes, while Buhari was in detention, Safinatu had dealings with the Babangidas partly to help her cope with life, and also to get her to help reconcile Buhari with IBB. It was the attempt to use her for this purpose that got Buhari angry, moreso since he had warned her not to take offers from the Babangidas. But Safinatu’s defence was that the reason she collaborated with the Babangidas, who were then in power, was to see if she could use the privilege of her rapport with IBB’s wife to help secure his (Buhari’s) freedom. She also explained that she was pushed to accepting gestures from them, when life was getting unbearably tough for her and her kids.

She may be right. Life, indeed, was tough for Sefinatu after her husband was toppled in the coup of August 27,1985.

This is because, Sefmatu and her first daughter, Zulaihatu, were in Western Germany for medical treatment when her husband was removed from power. She later rushed back home, saw her husband briefly at Bonny Camp, where he was being held by the new military leaders in power and then packed out of Dodan Barracks. With her four daughters, she headed for Kaduna. For sometime, she was stranded, because the only family house at No 2 Sultan Road, Kaduna had been let out and the rent for two years paid. It was Bala Adamu, her husband’s family friend who gave her and her daughters shelter for 20 months in a house on Jabi Road. While there, the Babangida regime kept watch over her movements. When she left for a more convenient house on the outskirts of Kaduna GRA, said to have been built by the friends of Buhari, she was confronted with what to do to generate income. It was then, she took

to farming It was her father (also a farmer) who gave her a large farm on Kaduna – Abuja road where she grew vegetables. Her father also gave her some cattle to tend but at some point, she lost about  14 of them to thieves. She also engaged in petty supply business. 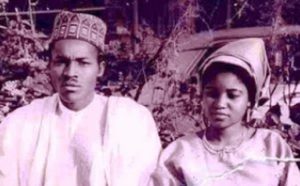 What made life further unbearable was that her children, who then attended Bakori Federal Government College; Funtua had to suffer taunts from their school mates before the Principal of the school came to their rescue. Of all of Buhari’s daughters, it was Fatima, who was then 12 suffered most. So also Lami, Buhari’s last daughter who was 4 years old However, she took  time out to do some literary work and she was able to do more work on her cookery book which she started at Dodan Barracks. It is a selection of more than 100 Nigerian dishes. It was in the midstl of this that Sefinatu received a request for a visit from Mrs Maryam Babangida. When she did not respond in time, more pressure was applied on her through the various emissaries sent to her. Buhari, while in detention got to hear this and other stories that he was told. He was angry, but waited till he got out before taking it up with Sefinatu. As far as Buhari was concerned, Sefinatu betrayed his trust. There was also the issue of Sefinatu not having a son for him who will continue to bear his name.

An indigene of Mani Local Government in Katsina State, Late Hajiya Safinatu started her primary school in Tudun Wada Kaduna (1959-1960) but was later transferred to Nasarawa Primary School now Dikko Memorial Primary School in Katsina when her father Late Alh. Yusuf Mani was transferred to Lagos to work as Private Secretary to Late Alh Musa Yar’adua who was Commissioner for Lagos Affairs in the Federal Cabinet of the First Republic.

After her Primary School, Late Hajiya Safinatu proceed to Women Teachers College Katsina where she obtained her Grade II Teachers Certificate in 1971.

Late Hajiya Safinatu got married to her husband Gen. Muhammadu Buhari two days after her graduation from Women Teachers College Katsina at the age of 18. Though she met her husband in 1966 at the age of 14 when Major General Muhammadu Buhari then a Major in the Nigerian Army came visiting to her family house at Cameroun Road, Lagos in company of his friend Late Major Gen Shehu Yar’Adua (Rtd). The marriage was delayed due to the outbreak of the Nigerian Civil War and her father’s desire to see her further her western education to a higher level before marriage. Her marriage to Major General Muhammadu Buhari was blessed with five beautiful children, namely, Zulaiha, Fatima, Musa (Late), Hadiza and Safinatu Buhari.

As first lady, her daily routine starts with prayers, reading newspapers and doing domestic works at home. At official level, she was involved with hosting official guest particularly when visiting heads of states come with their wives.

One memorable moment for Late Hajiya Safinatu was hosting the Gambian First Lady in the ancient city of Kano where they visited the city wall and one of the markets in company of wife of the then military administrator of Kano State, Mrs Halima Hamza. At her leisure in the State House, Late Hajiya Safinatu spent time collecting and compiling traditional Hausa and Fulani recipes which she later published after leaving state house for future generation. The title of her book is (“Our Delicious Menus” Recipes, Seasonings, and Culinary Ethics) published in 1999 by Nigerian Defence Academy Press, Kaduna

Her hobbies included reading, community works, passion for her husband, children and relatives, accommodative and helping the needy. Late Hajiya Safinatu would have been a historian going by her passion for history of past events which she always shares with her children, relatives and the public. A lot of people will testify to her love for the children of the less privileged in our society.

In 1998 Hajiya Safinatu was diagnosed to be diabetic in far away Saudi Arabia. She battled with the ailment for 8 years. Her desire is to live and impact positively on the lives of upcoming generation but when death came knocking, Hajiya Safinatu surrendered all her good wishes for the future generation to the cold hands of death. Hajiya Safinatu died on the 14th day of January, 2006 after battling with Diabetes for 8 years.

EXCLUSIVE: How Pres BUHARI Divorced His 1st Wife, Safinatu Because Of IBB & His Late Wife [The Unedited Story] was last modified: January 8th, 2017 by Reporter

Serious Symptoms You Must Never IGNORE