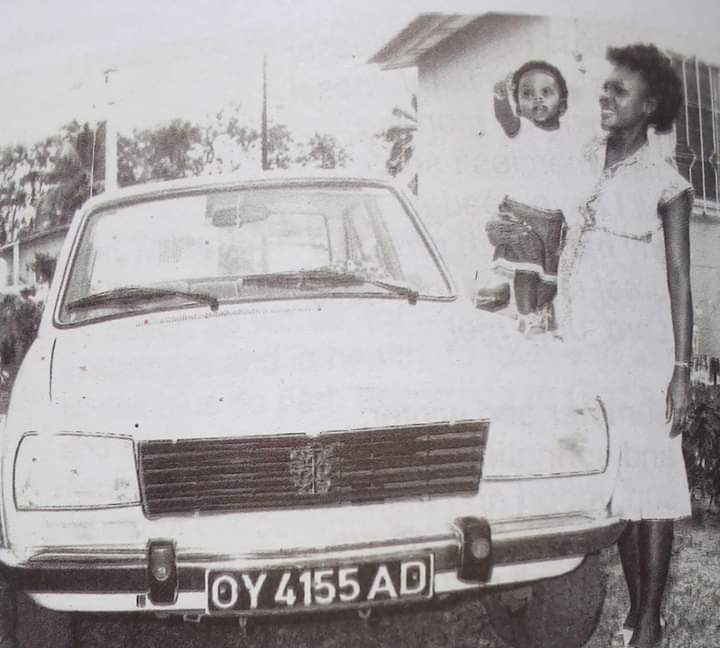 My first contact with her brand of car was in 1979, through my first son’s nursery schoolmistress who had just purchased France’s latest queen of the road, the Peugeot 505 brand. And it was love at first sight!

“Subsequent newspaper, and billboard, advertisements announcing her arrival into the Nigerian auto market fuelled my passion to own one.

“My dream came true in 1982 when I jettisoned the ‘older sister’, a Peugeot 504 (OY 4155 AD, sold to Moshood Erubami, the famous human rights campaigner, who was then a co-staff of the Union Bank, Agodi, Ibadan, with my wife.) An ambulant television reporter thus registered his new catch, OY 1777 BD, at his hometown licensing office at Onireke Area of the city, adding a status symbol that would be opening doors to several grade-A assignments/ceremonies and acquaintances – males only, mind you. Hmmm.

“I was a reporter at the Nigerian Television Authority(NTA), Agodi, Ibadan, when I acquired OY 1777 BD. When a new television station, the Television Service of Oyo State(TSOS, now called BCOS-TV, Ibadan), came on board, I was among her pioneer staff. In fact, the first reporter to appear on the channel, as well as the first Chairman of the TSOS Chapel of the Nigeria Union of Journalists(NUJ). I digress.

“In February 1983, I was seconded from TSOS to the old Oyo State Governor’s Office, Agodi, as one of Governor ‘Bola Ige’s three Press Secretaries. I wish to recall, in this ode, two outstanding state duties performed by me with 1777, during the six-year period that I, her first love, was the Press Secretary to four Governors of the state.

“On 6th March 1983, Chief Obafemi Awolowo, SAN, celebrated his 74th birthday in his hometown, Ikenne, Ogun State. Being a year of great political expectations, what with that year’s Presidential and General Elections in view, Ikenne was agog with Papa’s relations, friends, political associates etc, resulting in huge human and traffic jams, quite expectedly.

“On that day, Governor Ige and his entourage departed Government House, Agodi much earlier than scheduled for Ikenne, making me, and Femi Mapaderun, who also was on secondment from Radio O-Y-O, to Governor Ige, stranded, as it were, when we both arrived at the Government House. I told Femi to hop inside 1777, and off to Ikenne in 1777, we went!

“Such was the crowd at the Ajina Street home of the Awolowos, that I was forced to park 1777 almost a kilometre away from the venue of Awo’s birthday celebration.

“At about 3.30 pm, I saw Felix, the ADC to Governor Ige, shouldering, not elbowing, his way through the mass of people and vehicles. He ordered the Governor’s orderly to locate the OYSG’s convoy, when it was eventually located, the driver of the pilot car(the leading vehicle in convoys) could hardly move his car, despite the wailing siren. There was a glut of gluts.

“Confident that 1777 was tucked safely away from the traffic glut,I approached the governor, Uncle ‘Bola, who was standing with his wife, Honourable Justice Atinuke Ige, at the entrance gate of Papa Awolowo’s home, and asked him if he would not mind to return to Ibadan in 1777.

“Can it fly?”, His Excellency chuckled, oblivious that my car was parked a kilometre away from the melting point.”No, Sir, it cannot fly, but the car is parked far away from here”, I answered.

“Without much ado, the Governor, his wife, the ADC, the Orderly, Femi and I, with due respect to the law of equilibrium, tucked ourselves inside 1777, and within hours we were back to Government House, Agodi.

“The second state duty performed by 1777 was on the day General Ibrahim Babangida toppled Major-General Muhmnadu Buhari-led Federal Military Government, on 27th August 1985. It was 1777 that came handy for the use of my boss, in our movements that day.