Home News Fear: Lagosians Refuse Taking Man Who Collapsed At Oshodi Out Of The Road
News

Fear: Lagosians Refuse Taking Man Who Collapsed At Oshodi Out Of The Road 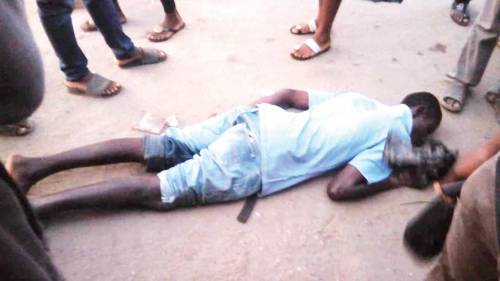 Pedestrians plying the Lagos-Abeokuta expressway on Wednesday witnessed an unusual sight, which slowed down movement of vehicles on the busy highway during the peak period of 6:00p.m and 7:30p.m. when an unidentified man suddenly collapsed in front of Nigeria Army Shopping Arena at Oshodi.

Passersby who saw the man when he collapsed declined to take him out of the road for fear of the unknown. He was left for a long period to lay on his belly in the middle of the road as vehicles slowed down to maneuver crushing him.

A businessman at the shopping arena, Mr. Calistus Obi, who was at the scene of the incident, said people were afraid to touch him because they couldn’t ascertain the circumstances that made him to collapse, adding that the man might be under the influence of alcohol or drug like codeine.

“Others were of the view that the man might be suffering from epilepsy, which could cause such unexpected stumbling, but he just lay still for a while.
He was later sprinkled water, which made him to rise and leave the road for traffic to resume its normal flow.

Fear: Lagosians Refuse Taking Man Who Collapsed At Oshodi Out Of The Road was last modified: August 10th, 2018 by Damilare Salami