How I Fell In Love With My Wife In LONDON 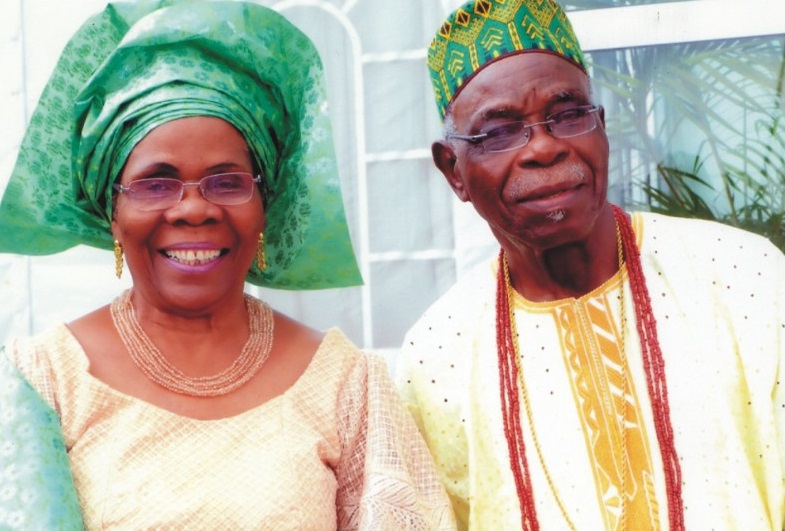 Late last year, popular Ijebu builder, Otunba Fatai Ishola Osikoya popularly called FISKO turned 90 and City People Magazine Publisher, SEYE KEHINDE talked to him about his accomplished life. He is a professional builder who laid the foundation for other builders who came after him to build on. He is a Builder by training and he became the 1st President of the Nigerian Institute of Building in 1965. He also spoke about how he met, fell in love and married. Otunba (Mrs.) Adebola Osikoya (nee Alatishe) who passed on a few days ago. At the time of the interview, she was still alive. Mummy, also spoke about her husband and how she fell in love with him. Unfortunately, Mama passed on 14th April, 2018, at the age of 84. She took ill after her husbands birthday last year. The family will miss her. Her kids describe her as the best mum in the world. They also call her a home maker. She was buried in Ijebu Ode a few days ago according to Muslim rites. What did her husband tell City People about how they met? What did she also say? Read on.

When you met your wife in London years back what were the striking things you saw in her, that made you go for her?

Her beauty. Her Inteligence. Fortunately one Ijebu man, Mr. Abudu was her guardian. Mr. Abudu was my guardian also. He was to many Ijebus in London at that time. I went to see him as my guardian. She too came to see him. When she was about to leave, Mr. Abudu now said to her that I was also leaving. Why don’t you wait, so that both of you can get to the railway station together. She said ok. I also said ok. When she was leaving, we both left together. At that time, I used to buy West Africa magazine.

She didn’t use to Miss West Africa Magazine just as she does not miss City People now. I saw her to the railway station. When we were in the train, we got discussing and I told her that I take West Africa magazine every week. I said. I will be sending it to her every week as soon as I finished. She reads it back to back. And I was sending the magazine to her for one whole year without my wife acknowledging.

At the end of the year, her father came. She told me her father was coming in from Ijebu-Ode. We have what we call  the Omo Iya Metta historical analogy in Ijebu history. They are of the same parents, unknown to most of us, our mothers and fathers do things together. We only know they relate with each other. The reason they’re late we wouldn’t know. When her father visited I went to the station with her to meet the father. When we met the father, she introduced me to the father. He was surprised. He said I am the child of his younger family member. That was how we started and the relationship started growing.

What were the striking things you saw in her that made you go for her?

She didn’t have the attitude of Nigerian girl. She had the attitude of foreign girls. She followed that. Anytime we discussed, she discussed truthfully. That attracted me to her. One weekend I decided to go and see her at the college in London. We continual like that.

How did you make it known to her that you were interested in marrying her. Was it through letters?

No, not through letters. But through actions. When I visited her at the college, she and Mrs. Elebute, the wife of Prof. Elebute, were close, very, very close. She is called Oyinade. She is now a Professor. After my wifes father left, Oyinade and  herself visited me. They started discussing. And my wife said to her that she likes me. Then, we started going out together. I did not say to her that I will like to marry you. It just happened. Naturally, when I told my mother she said Noo. You can’t do that because all of you are Omo Iya Metta, meaning you are all from 3 related mothers. Then, the father heard. The father also objected because he said we are like brother and sister.

Omo Iya Metta. We kept going. When she was going to Dublin from London to further her education, I saw her off from the Station to the Port, all the way. Immediately she got to Dublin, she wrote to me. I acknowledged. Almost everyday we were communicating. Our marriage took place in London. We didn’t listen to all these Omo Iya Metta stuff. We just continued. One day we just decided to get married. We got married in 1965. That is how we did it and thank God we are still going  stronger.

What has kept the marriage going stronger?

Truthfulness. We are always truthful to ourselves. When I was still in Shell, they all knew me then. They used to call me Osi The Tough Guy. I do my work religiously and I don ‘t take any nonsense from anybody, be it white or black.

How have you found your marriage to Otunba Osikoya?

Its been quite a successful experience knowing him. I can’t say I regret any of it because even little set backs are part of life. But 90% of our relationship has been very, very agreeable to both of us. And to the children who also try to emulate us, marriage wise. They are all happily married.

What were the things you saw in him that made you accept to marry him?

One vital thing I saw in him is Consistency. When he says something, he means it. He does not forget it. and he is not going to change, never mind your reaction. After  we met, he used to send me West Africa magazine. He lived in London then. I loved outside London. I told him I will like to read it. He will send it to me every Monday. He would have finished rending it by Sunday. He will put it in the post to me and I will get it on Monday. He did that for 1 year. I did not say Thank you. Yet, he kept doing it. Then , my father came abroad for a holiday with one of his wives. He literally left all what he was doing, took on to my dad, as if my dad  was his own dad. I was wondering what was going on. When we got to the hostel he was to stay he said, daddy, you can’t live in a hostel. Its for students. I am going to go and look for a flat for you. He got on his motorcycle. In no time, he was back and began to pack my daddys things, his luggage.

At the end of the day I had no option to start loving him. This is a man who had ben expecting me to say  Yes to him. Even though I didn’t say it in words, he knew I liked him. I just grabbed him, embraced him and gave him a kiss. He said he got on his motorcycle that day and he was flying home. That is what I like about him. When he says something he sticks to it. Whether you appreciate him or not, he has made a promise and he is going to keep his promise. If he does not want to do something he will tell you No. But if says yes will always be Yes. That is the biggest asset of his that I like.

Fantastic! I was my fathers…I don’t know what to say. He just took to me because he said, the day I was born, my mother had a long Labour and he fell asleep. It was at home in those days. They delivered me at home. He fell asleep after he had helped my mum. The Labour Attendant wanted more money. So she went to hang something up, So there will be a delay. Then my uncle came in and saw what happened, what the attendant had done and  he said Ah! see wicked attendant and he then went to wake my dad up. He said I am talking to my mum, in my sleep. She is telling me she is coming back. Having removed that thing that the attendant hung up, they heard my cry. And my father said I told you she  is coming back. She is back. Give her to me, even though he didn’t like female kids. He took me like that with the blood and everything. From that day, the bond between us was intact. He saw me as his mother who had come back.

My father was the late Balogun of Ijebuland, Balogun Alatishe. He was Balogun from the 70s till he died at the age of 94. I was his favourite child. I was the first he sent abroad. Of course, I got married there which he didn’t like. He will have preferred us getting married here. My husband made up for it. As soon as he came back he tried to be his good friend. So, when I came back 6 months later, they were already very close. Until he died, he was his favourite son. He gave him the nick name Akobi Daddy. My father died in his arms. He was ill. And he was feeding my dad, when he gave up. They were that close.

For my childhood, fortunately or unfortunately I left Nigeria at the age of 13, and so I lived with people that I hardly knew and I didn’t come back until I was 24. But the few years I spent here were good years. My mother was on the strict side. But I will always run to my dad who will defend me. I had a good time.

How I Fell In Love With My Wife In LONDON was last modified: April 30th, 2018 by Seye Kehinde

How To Make Sure Your KIDNEY Does Not Fail