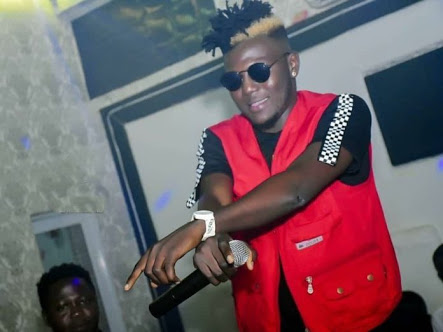 Ariyo Awodele Ezekiel is an emerging force in the music industry. The Oyo State-born artiste ventured into music at the age of 10 in a church where he played talking drum and he has been waxing stronger since then.

His latest entitled single “Ori” brought him to the limelight and is now being played regularly on Radio Stations across the country. He paid City People a visit and was interviewed by City People Music Reporter Precious Pomaa, where he spoke about his journey so far and other relevant issues.

Ariyo Awodele Ezekiel popularly known as (Areezy) is into HIPPOP Music. He was born Sep/27/1997 and was brought up in Lagos. He is a descendant of Oyo State. He was born into the family of 3 and he’s the last born of the family. Areezy got his secondary school leaving certificate at Obele Community Senior High School, Surulere in 2013.

He started music at a very tender age of 10, as an instrumentalist in the church and a talking drum player. His choir master later discovered that he has the quality of a good vocalist, so he was persuaded into giving singing a try. He later became the lead singer for the choir in a very short period of time.

He is presently signed to PLondon Music and he has dropped two singles under the label Philomena and Shikolobi which is currently trending all across Africa.

What would you say inspired “Ori”

Actually, I have this Arab group I follow on IG, I watch people suffering on the street, it touched me and I tried to pass a message to people that God can do it. And as an upcoming artiste I have been a lot so for God to bring me from that level to where I am now I think I should really be grateful.

I started music professionally 2 years ago when I dropped my some single titled Philomena, Shikolobi, Olamide, and Ori under P London music.

I have so many challenging moments. When I go to show early at times, I am still not allowed to perform, or the one you are asked to buy a ticket and come with friends at the end of the day, you still not be allowed to perform. I have a whole lot of challenges that I cannot even say or think about for now, but we just have to thank God all the way and give Him all the glory.

With all you have faced, have you ever had in mind that music was not your calling or you will never make it up with music?

I never had ‘stopping music’ in mind, because music is me, in my family, we love music a lot. I actually started from Church where I play talking drum.

So what would you say inspires your music generally?

Wow, I attend white garment church and I am an instrumentalist. I known different sounds, you can ever think of, that is why I keep making the statement that music is in-built in me.

Who are the artiste you look forward to working with?

I look forward to working with a lot of artistes that do good music.

Aside music what else do you do?

Hmm, I am a fashion designer; it is actually what I was doing before I started music professionally 2 years ago.

What are the things fame has added to you?

Nothing much. though fame has not just allowed me to do some things I do before, like walking freely on the road and other things, never the less I am still myself.

Are you thinking of going back to school?

Oh yeah, I will so go back to school, I actually want to face music for now and get my stand before I can try to combine school, so it will be easy for me.

How is your relationship with your Record label?

I think I left my parents to another parent, because we have a very good relationship.

How did you come in contact with this label?

One of the Instagram freestyle I did got the attention of likes of Kiss Daniel, Tundenut and just few to mention. Kiss Daniel was actually the first to show interest in signing me because he posted a free style I did with an hashtag saying  “Yo G world wide I want him” after some seconds he deleted and posted with another hashtag.

He asked us to linkup after we linked up I tried calling and he did not even take my calls, a few weeks later I got a call from him saying G worldwide was also interested in me, so I went to G worldwide after I read the deal I could not accept cause the deal was not okay by me. So I had to step back. I turned down so many opportunities after Kiss said he wanted to sign me, I was pained but I could not do anything. After some time I got a Label. My present boss (Pepper London) asking me to drop my managers number, I didn’t want to take it, serious but I gave it a second thought and sent the number, now am signed under P London music and I feel at home. God will continue to bless him for making a way for me.

Were you signed to G worldwide before you were asked to drop and album?

No, I was not signed, I was only asked to drop and album before they consider the deal. P London never heard my song before he signed me so I don’t know why I was asked to do that by G worldwide.

What do you have to say to other upcoming artiste?

To me, I would say if you don’t do anything serious, no one will take you seriously. Keep pushing forward, be your self and focus on God.

In five years where do you see yourself?