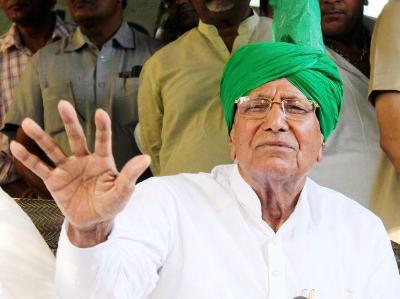 A former minister serving a jail term for corruption has passed India’s school-leaving examination at the age of 82.

A former Indian minister, who is serving a 10-year jail term for corruption, has passed a school final examination at the age of 82, his son said Wednesday.
Prakash Chautala, a four-time chief minister of the northern state of Haryana, took the class 12 school-leaving exam conducted by India’s open schooling system at its centre in Tihar jail, said his younger son Abhay Chautala, a legislator in Haryana.
“He sat for the last exam on April 23, and has got a first division,” the younger Chautala said.
First division is similar to an “A” grade.
“He decided early on to use his time in jail purposefully. He goes daily to the jail library where he reads newspapers and books.
“Sometimes he asks us to send him textbooks and reference books,” Abhay Chautala said.
The minister was convicted in 2013 along with 53 others for forging documents to appoint no fewer than 3,000 teachers in 1999 and 2000.
The prosecution said they took bribes from these candidates and ignored those who were more meritorious.
The trial court conviction was upheld by the Supreme Court in 2015 and Chautala has been serving his sentence in New Delhi’s Tihar jail.
His older son, Ajay Singh Chautala was sentenced along with him.
Prakash Chautala is a leader of the Indian National Lok Dal, a political party founded by his father Devi Lal.
-NAN
Former Minister Passes School Examination in Jail was last modified: May 17th, 2017 by Arinze Ago