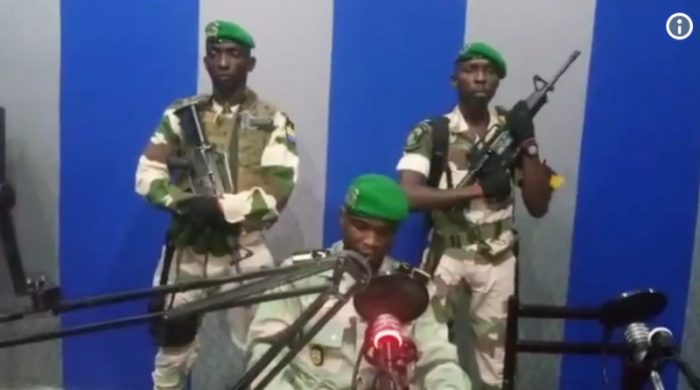 Lieutenant Kelly Ondo Obiang reads coup broadcast in Gabon> Did America know a coup was in the offing?

A spokesperson for the government of Gabon has said the political situation in the country is “under control”, following an attempted coup.

Information coming in states that four of the rebels had been arrested by the authorities. A fifth is on the run.

Junior officers claimed they seized power “to restore democracy” in oil-rich Gabon, where the ailing leader’s family has ruled for 50 years.

Tanks and armed vehicles could be seen in the capital Libreville.

The soldiers took control of the national radio station at 04:30 local time (03:30 GMT) to read a short statement announcing a “National Restoration Council”.

Current leader Ali Bongo succeeded his father Omar Bongo as president in 2009. He narrowly won re-election in 2016 in a poll marred by violence and accusations of fraud.

Facts coming in state that the coup attempt came as a huge surprise. The army has always been seen as loyal to the Bongo family, he said, because it is dominated by the presidential guard, who mostly come from Mr Bongo’s home region.

Many Of The Things People Say About Me Are Pure Lies