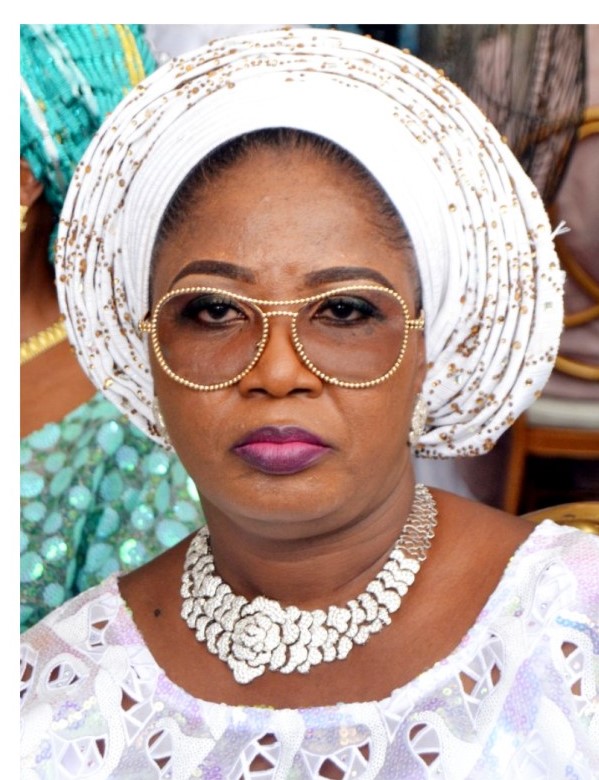 •Celebrates Her Own Birthday

The road leading to the spacious Tafa Balewa Square, (TBS) in Victoria Island, Lagos was filled with exotic cars on Sunday 30th of June, 2019 as Chief Mrs Folasade Tinubu-Ojo, the Iyaloja General of Nigeria held a 3-in1 party that shook Lagos to its very roots.

The event which was a teal monotone affair had over 5000 Nigerian market women across the 36 states of Nigeria in attendance. They all came out in their large numbers not only to celebrate with Iyaloja General but to also felicitate with Iyaloja General’s Father, Senator Bola Ahmed Tinubu, the Jagaban Borgu of Nigeria as they held a special fidau prayer for his late Mum.

The historical event which kicked off with a special thanksgiving and Fidau Prayer paraded many A-list Nigerian politicians who came to show love to the popular Tinubu Family of Lagos. The Former Governor of Osun State, Governor Rauf Aregbesola who is Senator Bola Ahmed Tinubu’s closest ally was not just one of the early callers, he was one of those who welcomed other politicians like Governor Babajide Sanwo-Olu, Governor of Osun State Governor, Governor Gboyega Oyetola, Cardinal James Odumbanku, Otunba Busura Alebiosu, Senator Ganiyu Solomon, Senator Mamora, Senator Gbenga Ashafa, Wale Edun to mention few.

But of course “Eko for Show“ as they always say, the event was also an avenue for many female celebrity women to step up their fashion game and make fashion statements that will forever linger in the minds of people for many weeks after the event has taken place. It was also an avenue for many of the society women to show many of their expensive collections of 18carat gold and diamonds which complemented the special teal lace supplied by Jumrash fabrics boss.

Kudos to the celebrant, Mrs Folasade Tinubu Ojo, the Iyaloja herself who made heads turn in a special hand-cut HOH lace matched with an exclusive Rodo Shoe and white diamond which sat well on her neck. The “Omo Onikoyi esho” as she is fondly called walked in like a Queen that she is a few minutes past 1 pm looking stylish with her full entourage. There is no way Iyaloja General of Nigeria, Mrs Tinubu Ojo can walk without her full entourage which comprises of heads of several Lagos markets who run the biggest stores in town. They were clad in the teal special aso-oke matched with unique accessories that complement their look.

While we were appreciating Iyaloja General’s beautiful look, Hajia Taibat Elemosho Okesanjo’s new signature headgear caught our fancy. She made a big fashion statement as she walked in a few minutes past 3 pm looking like a pack of diamonds.  She complemented her lace with beautiful 18carat gold.

What about Mrs Akerele, the best friend of “Iya Oyo?, Alhaja Alimotu Shadiat, the wife of popular Lagos socialite, Oba Elect, Alhaji Buari Oloto? So also is Mrs Joke Sogunro, the Ceo of Soggys Couture who enjoyed the event with Alhaja Risikat, the popular Ghana businesswoman who is also the Iyalode of Ghana. Did we tell you about the grand entry of popular police officer, CSP Dolapo Badmus? The stylish police officer walked in elegantly with Alhaja Bello, the Ceo of Jumrash Aso-oke and her best friend of many years  Queen Ronke Erinle. Another celebrity woman whose style got heads turning was Mrs Abiola Towobola, the Ceo of PMluxury on Awolowo Road, Falomo, Ikoyi. What about King Wasiu Ayinde’s daughter, Hajia Idayat Marshal and Kenny Rhoda? These 2 are popular Lagos young politicians playing big in their constituencies. They stand out looking many times beautiful.

Have you also noticed that Erelu Fopla Animashaun is back on Lagos social scene? She was spotted looking pretty with her best friend, Olori Barakat Akamo who enjoyed the night with her hubby, Oba Fatai Akamo Akorede. We can never forget to tell you that Mrs Abiola Toto Abuga now wears a new look. This pretty plus size woman has lost many Kg and she looked many times younger with her hourglass figure shape. Many couldn’t help but turn to catch glimpses of the woman who knows what style fits her body shape.

READ ALSO: NICKI MINAJ LANDS IN COURT FOR POSTING OWN PICS ON INSTAGRAM

Inside The Most Expensive Private Cemetery In LAGOS, Vaults & Garden

The Story Of The ADO-ODO People Revealed!