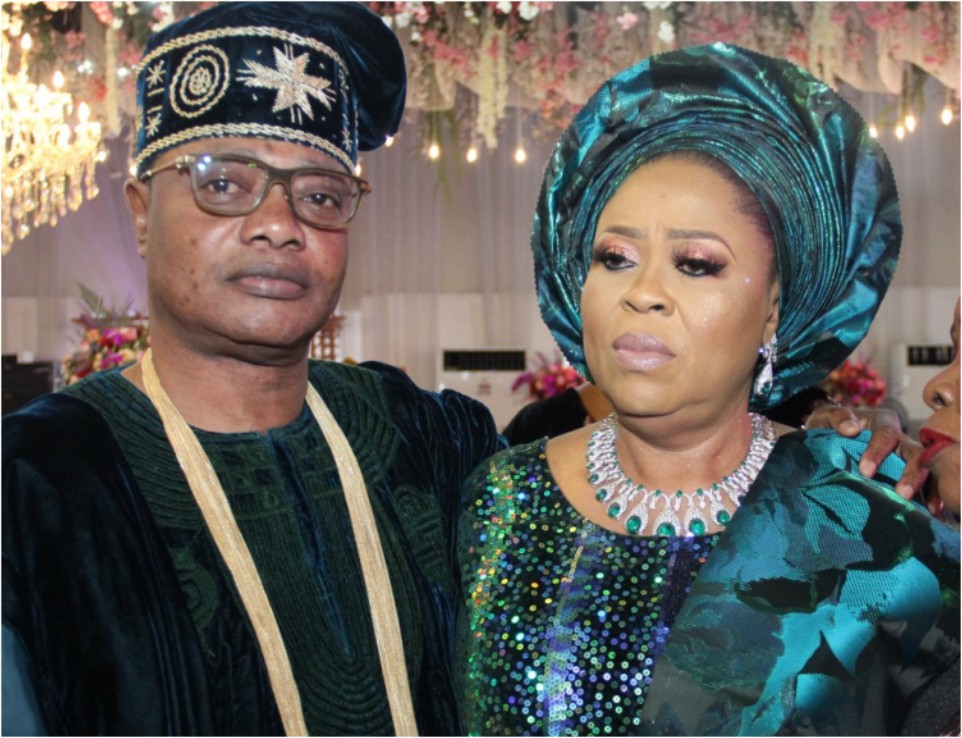 Otunba Risikiyat Afolasade Ogedegbe needs little introduction. She is the biggest Jeweller in Lagos and this was why the A-list Nigeria’s celebrities of note stormed her daughter, Mayomi Ogedegbe’s Engagement on Thursday 11th and Saturday 14th of March 2020 for the Mothers Night and engagement ceremony respectively as her pretty daughter said I do to Eyimofe Gbadamosi.

The event which was a gathering of many super rich Nigerians because of the 2 prominent families involved paraded many business tycoons, politicians of note and many South-West society women of style at Queens Park V.I., Lagos.

City People Assistant Society Editor, ABIOLA ORISILE and JIMMY ABDULRASHEED were at the classy wedding to serve you exclusive gist.

WHY MANY RICH NIGERIANS SAVED THE DATE

Many who heard about  Mayomi’s wedding last year looked forward to saving the date not only because she is the daughter of a successful and outstanding Lagos society woman but because Mayomi is one of the rich silverspoon kids who combine beauty with brain. Don’t forget that Otunba Sade Adesoye’s social and political influence can’t be left unnoticed too. Another reason why many saved the date is because no one beats Otunba Sade Adesoye in fashion and being a mobiliser, everyone knew the wedding will be grand. She is a total package of a complete woman.

THE CEREMONY KICKED OFF WITH AN ANKARA MOTHER’S NIGHT

Mayomi and Eyimofe’s wedding kicked off with a talk of the town mother’s night which had over 500 pretty women rocking a luxury torquise and yellow Ankara with a yellow turban. The classy mothers night was held at the luxury exclusive suit in Victoria Island and it lasted till wee hours of the Friday 12th of March, 2020.

THE BRIDE MAYOMI GETS A NEW MUM, DEACONESS GBADAMOSI

It was so obvious that the latest bride in town, Mayomi has got a new mother in Deaconess Gbadamosi. The ageless mother of Eyimofe couldn’t take her eyes off Mayomi, her latest addition to the “Gbadamosi Family”. She was praying fervently for the latest bride while she hugged her at interval. Information at our disposal reveals that Deaconess Gbadamosi and Mayomi share a special bond.

WHAT MAYOMI AND HER MUM HAVE IN COMMON

Sighting Mayomi Ogedegbe from afar, one could mistake her for her mum except for the huge age difference which makes Mayomi much younger. Not only do they have facial resemblance, just like Mayomis mum, Mayomi doesn’t like wearing revealing clothes. Unlike many young celebs her age who love to expose their flawless skin, Mayomi is a well cultured, morally sound young babe. She is also a successful entrepreneur.

Despite her young age, Mayomi runs a luxury gold and diamond shop called “Meyas Gold” in Victoria Island. She  got her fashion sense and business acumen from her mum, Otunba Risikiyat Afolasade Adesoye. Her humility is also second to none which is one of the attributes of the Awujale High Chief.

One of Naija’s best hands, Funke Bucknor was the one who handled the traditional engagement of Mayomi and Eyimofe. There is no doubt that she knows her onions as she was up and doing throughout. Give it to her, she made sure that  the best celebrity vendors were contacted to handle “Momayo 2020”.

FREEHAND SANITIZERS FOR OVER 3000 GUESTS

Immediately guests walked into the well decorated Queens Park, the unique cream invite was checked while those who didn’t have access card were double checked on the guests list. The Adesoye and the Ogedegbe were security conscious as they provided hand sanitizer, for over 3000 guests.

WHAT IS THE SECRET OF SISI ABBAH, HAJIA BOLA SHAGAYA’S BEAUTY?

Of course, it was an array of many of Nigeria’s society matriarchs who all came out to honour the most sought after gold and diamond merchant. While we couldn’t help but admire how Sisi Abbah, Hajia Bola Shagaya, Mrs Ireti Asemota have been able to keep their friendship, we couldn’t help but admire their beauty as they continue to age gracefully. They all came in early and didn’t leave until late in the night.

SALAWA ABENI WAS AT HER BEST FOR MOTHERS NIGHT

In case you don’t know, the Queen of Waka Music is not just fully back, she is also at her best. Many couldn’t remain on their seat at the mothers night due to her energetic performance. She was at her best.

Justice Iyabo Yerima is so popular on Lagos social scene. She is a justice who always loves to support all her friends and her loyalists 100 percent. At the Adesoye/Ogedegbes wedding, she was fully out with her friend of over 20 years, Prof. (Mrs.) Amudalat Olaniyan, the wife of Oyo State Deputy Governor.

If there is any society woman who cherishes are old friends like diamond, it is Otunba Risikiyat Adunni Afolasade Adesoye. She has some  friends she has kept for over 40 years and more. One of her old friends who were very visible at the party was the 2 Adunnis “Alhaja Kudirat Adunni Danmole and Alhaja Adunni Mopelola Savage.

So also is Justice Iyabo Yerima, Mrs. Peju Muraino, Mrs. Morufatshabi, Mrs. Sekinat Steven, Mrs. Kemi Osomekun, to mention a few. They were all out to support one of their own.

MANY LAGOS SOCIETY WOMEN CAME OUT FOR HER

For their age, one would have expected that they would look very aged but reverse is the case for Alhaja Amudalat Araga-Sosanya, the 93 years old mother of Otunba Folashade. Not only did she look 60, her skin and memory looked so much like a lady in her 60s. She knows virtually everybody by their first names. She was cynosure of all eyes as she enjoyed the event with Alhaja Mutiat Alli Balogun the mother-in-law of Alhaja Bukola Alli Balogun.

They were spotted wearing same attire at #Momayo 2020.

Sighting Otunba Folasade and her handsome hubby, one needs not be told that their marriage is blessed. It was also obvious that they are still entangled in their love webs. They have known each other all their lives. Don’t forget they are each other’s first love. Otunba Adegboye couldn’t take his eyes off his wife for a second. They were caught many times beaming with smiles. Do you know that Otunba Adegboye and his wife have a lot in common?

They are both Awujale High Chiefs, they run successful business empires and they are both fashionistas.  Many haven’t stopped talking about their emerald attire for the engagement date.

So also is the bride’s father, Alhaji Ogedegbe, he was cynosure of all eyes with his wife. He shares a strong bond with his daughter, Mayomi. He was spotted in cream attire which was the same rocked by the grooms parent.

This gist will note be complete if we don’t tell you about the grand entry of the latest bride, Mayomi Kafilat Ogedegbe. This young successful jeweller dazzled many in a peach colour handcult aso-oke by number one bridal aso-oke designs, “Deola Saego”.

She wore the best of diamonds with a luxury shoe to match. She walked like a Princess that she is. Her Melanin Skin radiated under her veil. Her choice of make-up artist was Bmpro while her headgear was done by Tawo Touch. Mayomi paid attention to details no doubt as her 2nd appearance at few minutes past 5pm in a sky blue luxury lace matched with a Saego headgear was breath-taking. The monotone look completed her attire and her white diamond mixed with sky blue stones. Her 3rd look was all green affairs. It was one of the luxry collections from “glitz and allure”.

The Akalas and the Buruji families are very close to the Adesoyes and they always honour one another whenever they have any event. For Mayomi’s Ogedegbe’s wedding, Senator Buruji Kashamu enjoyed the wedding with his pretty wife Susan while former Oyo State Governor, Christopher Alao Akala also made it too.

ROYAL FATHERS THROW THEIR WEIGHT BEHIND THE ADESOYES

The wedding engagement paraded many top South West Obas who all came out to show love to the Adesoyes. One of those who was very visible was Oba Ademola Saheed Elegushi, Oba Lateef Adams, Oba Olota of Otaland, Oba Olowode, Oba Iboro, Oloori Eyo Akinsikun of Lagos, Prince Ademola Eletu-Edibo, among many others.

SOLAPE ARAGA SOSANYA LED ALL THE ARAGAS OF IJEBULAND

The Arage Sosanya are one of the prominent Ijebu-Ode families. Ask within Ijebu, you will be told that they are rich and influential. Even the matriarch of the family, Alhaja Amudalat Araga Sosanya was a successful seamstress who was very popular in Ijebu-Ode.

She is known to have sewn for top celebs and schools (uniform). For Mayomi’s engagement, Engineer Solape Araga and Alhaja Bukola Alli Balogun were the ones who led all the siblings to the wedding.

They didn’t only play major roles, they supported their sister till late hours of the night.

It was double celebration for Mrs. Peju Muraino, one of the close friends of the bride’s mum. She turned 60 this month and she is surely not looking it. Speaking on her life at 60, she revealed that doing things in moderation has made her ageless.

Entering the Queen event  hall on 14th of March, 2020, one would appreciate the magic fingers that transformed the venue. The total ambience will make you want to party till wee hours of the day. The sitting arrangement was done in such a way that you will appreciate all the luxury engagement gifts that were brought to seek the hands of Mayomi in marriage.

The King of Fuji music, King Wasiu Ayinde Marshal who is the elder brother of the bride’s mum, Otunba Risikiyat’s performance was the best for the night. He dished out good music which made many A-List celebs dance for hours.

Though the Adesoyes are known for throwing  the best parties in town, but Mayomis wedding also brought to fore the fact that they haven’t relaxed. Of course the groom’s family were not left out as they dazzled the Ogedegbe’s/Adesoye’s with luxury engagement gifts and quality crowd which included Sir. Olu-Okeowo, Nana Yakubu (top Maritime top shot, and many others. Their corner was filled to the brim as the groom’s parents are also not just rich but influential too.