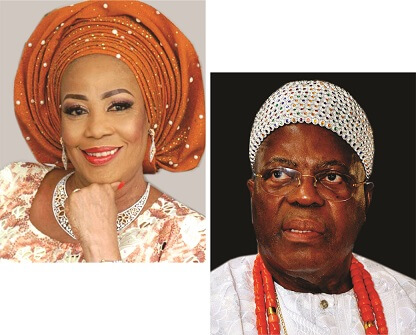 All roads led to Abeokuta,  the Ogun State Capital, on the 24th of July 2017 as  Oba Adedapo Tejuoso, Osile of Oke Ona’s Oloori, Olabisi Tejuoso, celebrated her 60th birthday in grand style. Although, the event was held on  Monday, which was the day Oloori clocked 60, but it was well attended by dignitaries from all walks of life  in and outside Ogun state.

The event kick-started at the family church, The African Church Cathedral of St James, Idi Ape, Abeokuta where a thanksgiving service was held, while the reception took place at The Marquee, Olusegun Obasanjo Presidential Library, Oke Mosan Abeokuta, Ogun State.

The event played host to many  dignitaries such as the  Ogun State Governor, Senator Ibikunle Amosun, and his wife, Mrs Olufunso Amosun, Alhaji Rasaki  Okoya, Mrs Abimbola Fashola, Alake of Egbaland, Olu Ilaro to mention a few. BUNMI MUSTAPHA brings you gists from the celebration.

THE CELEBRATOR’S DRESS A SHOW STOPPER

When the celebrator, Oloori Olabisi Tejuoso, stepped out in in her first clothe for the day, it was a   beautiful sight to behold as her thanksgiving dress  was something to talk about.  She wore a beautiful long off, white dress frilled with beaded and stoned gold accessories.  Her off-white head gear was reaching for the cloud as feathers dangled around it. A very stylish celebrator stepped-into the church as an  angel, walking down the aisle with her husband, Oba Tejuoso,  hand-in-hand  as a bride walks the groom.

The Ogun State Governor, Senator Ibikunle Amosun, made it  to the celebration despite his busy schedule on that day as he was playing host to be Southwest Governors. The Governor, whose family  members are also close to the Tejuoso family made a brief appearance at the reception  with his wife, who was  earlier present at the church thanksgiving service.

Wife of the Ogun State Governor , Mrs Olufunso Amosun, was present at both the church thanksgiving service, and the reception.  The stylish 1st lady wore a blue dress with a simple neck piece and head tie for the church thanksgiving service, while she spotted another clothe at the reception with her husband , a very beautiful blue fabric Iro and Buba.

Former first lady of Lagos State, Mrs Abimbola Fashola, whose husband is also  a Minister came with a full entourage.  The large-hearted woman came early for the event and one could have easily mistaken her for a member of the Tejuoso family as she was free with everyone present and also exchanged pleasantries with many guests. It was hard to tell if she is one of the specially invited dignitaries as she warmily welcomed everyone who came to her.

Business mogul, Alhaji Rasaki Okoya, who is the Chairman of Eleganza Group, and also an In-law to Oba Tejuosho, was at the church thanksgiving service.  He hardly misses any of the Tejuoso’s functions with his wife, Sade , but he came alone to the function.

The paramount ruler of Egbaland, Oba (Dr) Adedotun Aremu Gbadebo and The Paramount ruler of Yewaland, Oba Kehinde Olugbenle, were among traditional rulers at the event. Although, Alake and his Oloori,  Tokunbo, were only present at the church service, Olu Ilaro was at both the church service and the reception and he spent quality time before leaving.

OLUWO OF IWO GRACES EVENT WITH HIS OLOORI

The Oluwo of Iwo , Osun State , Oba Rasheed Adewale  Akanbi, who is one of the stylish kings in South West, came with his Jamaican Queen, Chanel Chin, who can pass for a model any day.  The fashionable king was in a rainbow colour aso-oke, while his Queen wore mint-green-french lace with her monarchy cap, They were present at for both the church service and the reception.

Dr (Mrs)  Anuoluwapo Bankole, the proprietress of Mercyland International Schools, Abeokuta, who is also the wife of the popular bussinessman, Chief Ogooluwa Bankole attended, so also was Jokotade Odebunmi, a politician and the past running mate  candidate to Gboyega Nasir Isiaka. She is married to Ogun Former Commissioner, Tokunbo Odebunmi. The two stylish women are close to the Tejuoso family, especially Dr Anu Bankole. This explains their presence at  the thanksgiving service and the reception.

Toro Fashanu and Tinuke Akin Taylor are two Ogun celebrity women, whose friendship has lasted more than a decade. Toro owns a beauty and cosmetics store popularly known as Body Shop, while Tinuke owns a fashion outfit , Twinkle Boutique, both shops are side by side on Oke Ilewo bank road Abeokuta.  They stepped out looking pretty as ever in their blue matching outfits.

Former Minister, Sarafa Tunji Ishola, who was also a one-time secretary to the state government, during OGD’s administration, was among dignitaries, who came to celebrate with Oloori Olabisi Tejuoso on her birthday.

Ogun State  Chief Justice, Justice Olatokunbo Olapode, also came, although, she was only at the church service and she sat close to Mrs Olufunso Amosun.

Wife of the Seriki of Egbaland,  Alhaja Fadare, a popular aso oke and aso ebi merchant,  wife of Ogun  popular bussinessman, Mrs Tom Daramola and Wife of Ogun former CBN top officer , Mrs Olusoga, are three Ogun celebrity women, who are intimate friends, they usually step out together at events and also did the same at the party too.

Jumoke Oyeneyin is one of the Lagos big babes rocking parties, she has been on the social scene for a while and apart from being very stylish and pretty, her style of  head gear, which is her signature,  always stands her out ,she came to celebrate with the Tejuosos .

Afenifere elder statesman,  Chief Ayo Adebanjo, also came for the celebration. the Ijebu-born renowned politician, who is over eighty years old was not looking his age , as he still looked younger that his age. He was present at the reception and spent quality time there.

Yomi Badejo Okusanya is the immediate younger and only brother of the celebrator, no doubt, the two love each other as they showed much affection at the event. Yomi also did the toast to her wonderful sister as she joins the sexagenarian team.

The Rev. Olayinka Omololu , the Provost of Christ Church Cathedral, Marina , Lagos was the Chairman of the birthday celebration.  He is also an uncle of the celebrator, a friend and colleague of Oba Tejuosho. In his speech, he described Oloori Olabisi as a virtuous woman, a friend, and a down-to-heart person, who is always willing to lend a helping hand. He also prayed for her to live long in   good and sound health.

THE THREE  OLOORIS  CAN DANCE

It is no news that tbe three Olooris of Oba (Dr) Tejuoso, the Osile of Oke Ona, Oloori Omolara, Oloori Yetunde and Oloori Olabisi, are very stylish and step out at events  in uniform, which also was the case, at the event. Although, the celebrator wore a dress for the church service before she changed into another beautiful fabric. It was the same for the other two Olooris.  One thing many people have not noticed is that the three Queens can dance, especially at their functions. They are good steppers and always show it, sometimes, they show the same dancing steps to wow guests.

Adedayo Tejuoso is Oloori Olabisi, the celebrator’s son, he was the one, who also  gave the vote of thanks  at the end of the party, but before then, he and his mother were on stage having a special mother- and-son dance moment, Oloori held Dayo’s head firmly, while they both danced and sang along with the thanksgiving tunes at the reception.

On the band stand was the popular group, Sugar Band, all the way from Lagos and it surely  knows  how to keep guests on their feet as the band boys serenaded guests with different mind-blowing tunes.

Global Exposure Events And Parties was the event coordinator, and it is good at what it does as it ensured guest’s comfortability at all moments. The event outfit also brought in beautiful hostesses called Global Hostesses, who spotted beautiful dresses, which was Colbat blue  matched  with a coral colour hair frill.

The consortium of caterers and those who did what are as follows, Ogun renowed drinks company, Ice Treat served chilled drinks till night time with their well-trained waiters in  clean gold-and-red outfit.  Choppies served finger-licking delicacies, Mama kass took charge of small chops and main meals, 2 Tees was also on ground for some mouth-watering meals , the outfit also catered for dinner the night before the event and  also breakfast, while Hothobs served pasta from their pasta bar. Parfait was on standby for sweet desserts . The event was beautifully  decorated by B Cubbed Events.