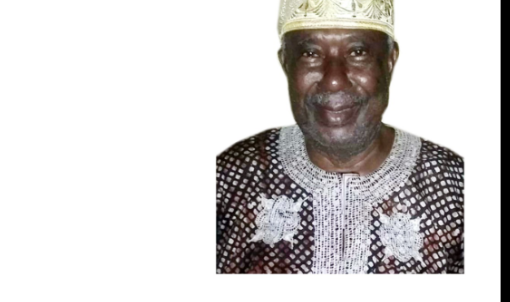 In Ijebu, GiwaBisiRodipeis known as the legendary Carpenter. He is also known as the Tree Planter because of his love for planting trees. He is the owner of Bisrod Furniture, has been planting trees in Ijebu-Ode, since 1986. Now he has a private forest of over 600,000 trees which include Mahogany, Walnut (Sida),Teek, Opepe, Masoniaand Appato mention but a few.

The big news is that GiwaBisiRodipewill be 79 in a few months time. And he feels happy and fulfilled about it. He is an Ijebuman to the core. He is one of those grand old Ijebumen who were born, bred and buttered in Ijebu-Ode. Hestarted his primary education at Wasimi African Church Bethel School, Ijebu-Ode and had his secondary education at Lagos City College, Yaba. He had his wood working (cabinet making) training at Yaba Trade Center (1958-1961), now Federal Science and Technical College, Yaba. He graduated in furniture craft with intermediate City and Guilds Certificate of London Institute (OND) in 1961 and the advanced level, final city and guilds certificate of London Institute (HND) in 1967.

His working experience started with the Cooperative Woodwork in Ibadan in 1961 and WNTV / WNBS Ibadan. His hard work in the WNTV / WNBS coupled with his managerial capacity earned him many in-service, managerial training in Nigeria and overseas, including those at the B.B.C Bush house in London, United Kingdom He attended in-service part time studies at the School of Drama, Department of Theatre Arts at the University of Ibadan. Many do not know that he started his roadside furniture workshop that later became BISROD Furniture Company Limited in Ibadan in 1961. In 1970, he designed and constructed the monumental giant moveable stage of international standard used by World-renowned American Jazz and soul singer, James Brown during his “I am black and proud” tour to Nigeria.

He was Chairman Association of Shareholders of Ecobank Transnational Incorporated for ten (10) years, Director of EcobankCotonou, Benin Republic, and Director Ecobank Nigeria Plcfor four (4) years, and retired at the mandatory age of 70.

He was Director National Fertilizer Company of Nigeria Limited (NAFCON), Chairman Ogun State Market Development Board in 2003, Chairman Ogun State Agric Development Cooperation between 2003 and 2007 and  a Council Member Federal Polytechnic, Ado Ekitiand Ilaroat various times.  He is a fellow of the Nigerian Institute of Management (NIM) since 1994 and was granted NIM life Membership Award at 76 years old. He is the winner of 2010 Nigerian Institute of Management (Chartered) Tuyo’s Entrepreneurship Award.

He won the award at the Second Biennial conference of Forest and Forest Products Society for Distinguished Tree Planter in 2010 and was awarded a Fellow, at the Federal University of Technology, Akure.  He is the Founder, and President of the Evergreen Tree Planters, formerly the Nigerian Tree Planters. His Tree planting exploit started in 1984. The Mahogany trees planted in 1984 are now his flagship in Tree planting that provide nesting platform for Eagles to raise their chicks and shed for monkeys.  Some of the Trees now produce seeds for tree multiplications at the tree seed nursery. The semi-automatic tree Seed Nursery can raise 1,000,000 (One million) seedlings from the mother trees yearly.

He is a member of the Council of Chiefs of Ijebu Land. The Awujale of Ijebuland, His Royal Majesty, Oba (Dr) S.K. Adetona CFR honored him twice with Chieftaincy titles of Fesogboye and Atunluto of Ijebulandin 1985 and 1992 respectively. He is a pioneer “Giwa,” which means “founding President” of EgbeBobayoage group (1938-1940) of Ijebuland. He was President of I-Jay 1969 KlubIjebu-Ode, Honorary Member of Ijebu–Ode Club, a Vice Chairman of family club of Nigeria, and Honorary member of Lion and Rotary Club of Ijebu-Ode.

Lastly, Giwa Bisi Rodipewas awarded an advocate for private participation in forest conservation and industrialization by the federal Ministry of Environment for 2015 World Environmental Day, held in Abuja on June 5, 2015. The Vice-President of the Federal Republic of Nigeria, Professor Yemi Osinbajo, presented the award to Giwa Bisi Rodipe.